Bye Bye ‘Pac Man’? Loss To Ugas May Be Pacquiao’s Final Exit From The Ring

Ugas had 'right' plan for Pacquiao, answered legendary champion's jabs with several of his own.
By Lem Satterfield August 23, 2021
Facebook
Twitter
Linkedin
Email 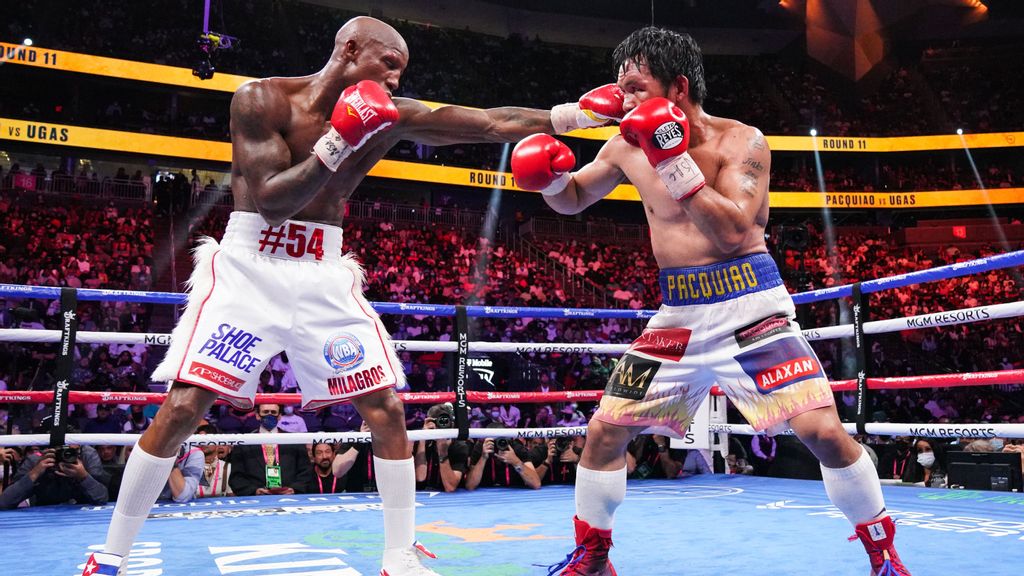 Manny Pacquiao had all but called Yordenis Ugas a “paper champion.”

Pacquiao said “it’s kind of embarrassing” that Ugas, the WBA welterweight titleholder, “got my belt without fighting me,” this after being stripped in January due to not defending the crown he won from previously unbeaten Keith Thurman via one-knockdown, unanimous decision in July 2019.

But Saturday night, Pacquiao was forced to eat his words as he took piston-like jabs, bludgeoning right hands and tenderizing body shots during Ugas’ unanimous decision victory before a boisterous, pro-Pacquiao crowd of nearly 17,500 at T-Mobile Arena in Las Vegas.

Ugas (27-4, 12 KOs) nailed Pacquiao with punishing rights in the eighth, increased his accuracy and power on them during the 10th and repeatedly pummeled and hurt Pacquiao on several occasions during the one-sided 12th, causing a cut over the southpaw’s left eye.

“My trainer, Ismael Salas, and I had a plan,” said Ugas, a searingly accurate counterpuncher even at 35 years old. “The double-jab was the lead punch, and I listened to my corner. We were going to move him around, keeping him off balance with the jab, so it all worked out.”

Scores were 115-113 and 116-112 (twice) for Ugas, a 2008 Olympic Cuban bronze medalist who justified his elevation to the WBA’s “Super Champion” status and its rejection of Pacquiao’s July petition to be reinstated.

“I told you, I am the champion of the WBA and I showed it tonight. A lot of people say Cubans can’t win the big fight,” said Ugas, who earned the vacant “regular” belt with a split decision over Abel Ramos in September to become the first Cuban 147-pound titleholder since Jose Napoles defeated Curtis Coke in April 1969.

“I’m very excited and proud that I got this win for Cuba and showed what we are all about, but, most of all, I want to thank Manny Pacquiao for giving me this moment in the ring [tonight.]  [Pacquiao’s] a legend, one of the greatest fighters that ever lived. I’ll always respect him, not only as a great fighter but outside the ring. I also admire that he fights for his country, as I do. I want to free Cuba.”

Ugas was announced on Aug. 10 to replace southpaw IBF/WBC champion Errol Spence (27-0, 21 KOs) against Pacquiao due to Spence’s retinal tear in his right eye that required surgery on Aug. 11.

Ugas considered the ensuing 11 days as an advantage, as he previously won at least three short-notice fights, including those over current interim champion Jamal James (August 2016) and title challenger Thomas Dulorme (August 2017).

“Everyone said [Pacquiao] was the [real] champion, but now, they know who the real champion is,” said Ugas. “Now the plan is to unify the title at welterweight. Errol Spence is the next one on the list. I am praying that he recuperates.”

Ugas’ career-defining triumph could be a career-ending loss for Pacquiao, a Filipino legend guided by seven-time Trainer of the Year Freddie Roach.  Pacquiao is 8-3 with one knockout since December 2012, when Juan Manuel Marquez’s right hand floored him once each in the third and last round of a welterweight sixth-round knockout victory.

In his bout with Ugas, Pacquiao claimed to be fighting on cramping legs, along with Father Time (he’ll turn 43 on Dec. 17).

“Congratulations to Ugas and his team,” said Pacquiao, who debuted professionally in January 1995 as a 106-pound, 16-year-old and remains the only eight-division champion in boxing history with 12 belts.

“I want to thank all my fans and the media… for supporting us. That’s why…we became popular and accomplished our dreams as a fighter. In the future, you may not see Manny Pacquiao in the ring. I don’t know. Let me rest first, relax and make a decision if I’ll continue to fight or not.”

Outside the ring, Pacquiao has a long history of political activism in his homeland, including being elected in 2016 to a six-year term as senator. And after Saturday’s loss, he sounded like he may well run for the top elected spot there.

“I’m sorry that we lost…, but I did my best. I will make a final announcement [about running for president] next month,” Pacquiao said of his country’s elections in May 2022.

“I know that I am facing a big problem that’s more difficult than boxing, but I want to help my people. I am a fighter outside and inside the ring. I look forward to returning to the Philippines and helping them during this pandemic.”

As for Ugas, the win improved him to 12–1 (5 KOs) at 147 pounds under Salas, including 3–0 opposite undefeated fighters. The lone setback was a disputed split decision to then-WBC champion Shawn Porter in March 2019.

His size, strength and range befuddled and gradually wore down Pacquiao. “The right hand was a shot I had planned to use on Manny,” said Ugas. “It kept working, so I kept using it.”

Pacquiao dictated a furious, if ineffective, pace over the initial four rounds, darting in and out with combinations into the seventh. But the blows were largely blocked by Ugas’ tight guard or “shell defense” as Porter described it, exemplified by parrying punches with his highly held long arms and elbows.

Ugas’ combined looping rights over the jab with well-placed body shots through the middle rounds, despite several questionable warnings early on for low blows from referee Russell Mora.

“Manny Pacquiao is explosive and moves in and out. But Manny Pacquiao is not Superman,” Salas told Zenger before the fight. “Pacquiao’s coming up in weight and getting old, something we plan to make very clear.”

Ugas is 4-0 since falling to Porter, his previous three victories being a one-knockdown, near shutout unanimous decision over previously undefeated former champion Omar Figueroa Jr. (July 2019), and, in 2020, a seventh-round stoppage of Mike Dallas (February) and the win over Ramos.

Ugas improved to 6–1 (3 KOs) against southpaws as a pro, including 4–0 (2 KOs) against left-handers under Salas, with victories over Bryant Perrella (September 2016) by fourth-round stoppage, and, in 2018, a seventh-round TKO of Ray Robinson (February) and a unanimous decision over Cesar Miguel Barrionuevo (September).

“Yordenis has a special technique against southpaws,” said Salas. “If you check Yordenis’ record, he’s always beating them.”

«Previous Post
VIDEO: Freesy Does It: How A Novice Became One Of The Best Free Divers In The World»Next Post
Eugenio Derbez To Star In ‘Lotería’ For Netflix