Venezuela Changes Currency For Third Time In Less Than 15 Years

The digital bolivar will be legal tender beginning on Oct. 1. 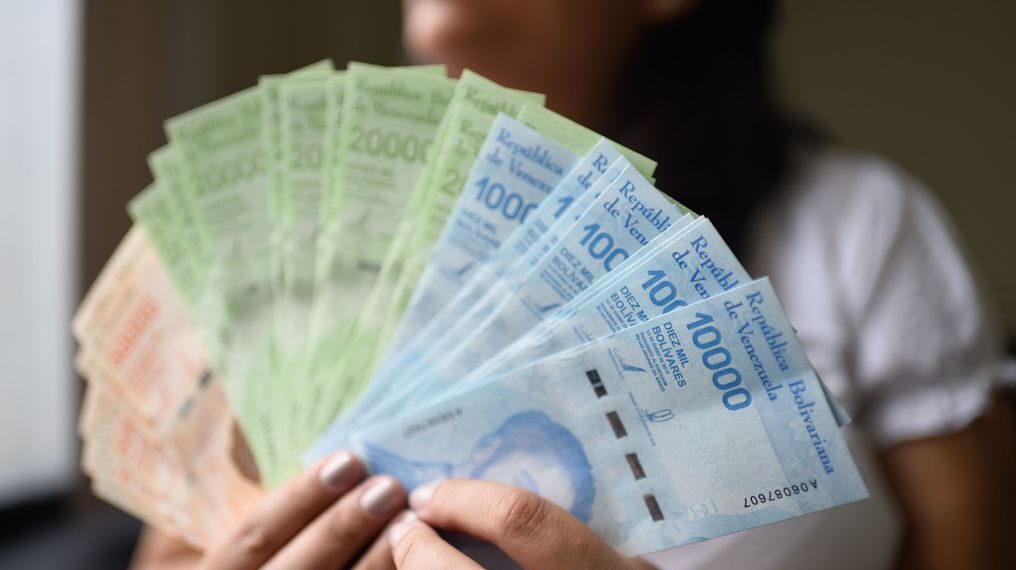 Venezuela has removed zeros from its bills in response to hyperinflation. The picture shows 2019 bills, with several zeros. (Carolina Cabral / Getty Images)

CARACAS, Venezuela — The Central Bank of Venezuela announced the third redenomination of the country’s national currency since Hugo Chávez came to power in 1999. The announcement comes in the first week of August as a response to “the crisis produced by the brutal attack on our economy … and the criminal application of an economic and financial blockade,” according to the statement.

The Venezuelan Ministry of Communication and Information (MIPPCI) shared a video on Twitter explaining the advantages of the new currency.

In a previous change under the Chávez regime, the Venezuelan government removed three zeros from its currency, the bolivar, in 2008. First used in 1879, the bolivar’s name changed after the 2008 change to “bolivar fuerte” (strong bolivar), and its value went from 2,150 bolivars to 2.15 bolivars fuerte per U.S. dollar.

“The redenomination was the center of a 2007 advertising campaign that deliberately attributed anti-inflationary powers to the process,” Ronald Balza Guanipa, a Venezuelan economist and university professor, told Zenger. “It was the centerpiece of several policies, but none addressed fiscal discipline, the freedom to set prices and foreign exchange rates, or legal certainty. During the oil boom and before Chávez proposed his socialist constitutional reforms, the redenomination was unnecessary.”

At that time, Venezuela’s inflation was hovering around 20 percent per year, and the government implemented the solution to simplify daily-life finances in the region.

“With the old currency, we spoke of prices in billions. Simplifying accounting transactions by eliminating the use of millions was one of the advantages of the process,” said Venezuela’s former Minister of Finance, Rodrigo Cabezas, at the time.

“Before the hyperinflation, Venezuela had an average annual inflation of 25 to 30 percent for 30 years,” Tamara Herrera, the director of financial consulting company Síntesis Financiera, told Zenger. “But that is not low inflation, much less by world standards of at least 20 years ago. However, [saying] that creates an inertial component and sets expectations.”

Herrera explained that Venezuela’s inflation was connected to a shortage. Price increases occur during shortages because the demand for a given product exceeds the ability to produce it. Inflation usually has a fiscal or monetary cause — an excess of money created at a rate much greater than the economy’s ability to respond by demanding existing goods.

“Government spending and the existence of markers for the dollar price in black markets, among other things, caused inflation in 2008. But oil imports in the middle of the boom slowed it down,” said Balza Guanipa.

After that, according to experts, Venezuela faced its worst economic crisis — one of the most serious and prolonged in modern history. Oil is Venezuela’s primary industry. Hugo Chávez’s death in 2013 coincided with the collapse of oil prices on the international market.

Chávez’s economic mismanagement and extended corruption led to two simultaneous phenomena: hyperinflation and the bolivar devaluation against the U.S. dollar.

Hyperinflation happens when an economy faces a general increase in prices that exceeds 50 percent per month.

“There is a spiral of inflation and devaluation into which Venezuela has fallen repeatedly. It has all the components [of hyperinflation],” including creating or spending more money than what the country has or can absorb, excessive price control (which hinders production), and control of currency exchange by setting an unrealistically strong exchange rate, said Herrera.

There is also “the inertial component, which sets expectations,” she said.

The Central Bank of Venezuela expanded its monetary cone, adding higher denomination bills to face the cash shortage at the end of 2016 when Nicolás Maduro was president. However, prices in bolivars rose so rapidly that there were not enough backup bills.

“Hyperinflation was the product of monetary financing of public spending in 2018, and that is happening now in 2021,” said Balza Guanipa, remembering that the 2018 crisis came “after oil revenues fell due to lower prices and lower production capacity before 2017, and later, due to sanctions.”

With this scenario, Nicolás Maduro’s government announced in 2018 a second redenomination that removed five zeros from the currency and temporarily changed its name to sovereign bolivar to differentiate it.

But the patches that the government tried to apply to the day-to-day economy did not address the problem that led to hyperinflation.

The International Monetary Fund estimated Venezuelan inflation at 200,000 percent in 2019. By comparison, the United States posted an annual inflation rate of 2.4 percent.

Faced with the daily difficulty of handling bolivars and the risk involved in keeping savings in that currency, Venezuelans began using dollars in their everyday life. The government lifted exchange control, a policy dating back to the Chávez regime, and decriminalized trade in foreign currency in 2018. Both measures contributed to the informal dollarization of the economy.

The current monetary cone — with the 1 million-bolivar bill as the highest denomination — fell short again. Venezuelans bought U.S. dollars in early August at around four million bolivars (it took four bills of the highest bolivar denomination to buy one dollar.)

Following the same formula, the government is removing six zeros more from the currency, changing its name to bolivar digital. Most of the transactions in bolivars today are made by bank transfers due to cash shortage; hence, the currency’s new name.

“I have not used bolivar bills for about five years,” said Gabriel Salas, a Venezuelan merchant. “We use bolivars almost always in electronic transfers and always anchored at the dollar exchange rate of the day. It is much easier to see dollar bills than bolivars in any business in Caracas,” he said.

Removing zeros from the currency is not a solution exclusive to Venezuela. Other inflationary economies have resorted to currency redenomination, including Raúl Alfonsín’s regime in Argentina in the 1980s or Robert Mugabe’s in Zimbabwe in the late 2000s.

However, experts say the measure does not solve the underlying problem and will lose effect quickly.

Removing zeros from the currency never stopped inflation, said Balza Guanipa. The measure “only serves to eliminate accountability. Without a coherent and informative national budget tied to a multi-year framework, countries suffering from hyper[inflation] will not be able to correct its main cause.”

“It is wrong to proceed with a redenomination without having done everything to prevent you from having to go through the process again within 3 to 5 years,” Herrera said. “The redenomination encompasses currency restatement with fewer digits, which is a great relief for the economy … and the only real advantage of this choice,” she said.

“Currency redenominations are generally the last step in a comprehensive macroeconomic program that has been successful in lifting countries out of hyperinflation. … Once the economy has been stabilized, you can define the currency, but we have not done that. We are doing [redenominations] over and over again, or taking partial measures, or no measures at all — which is what is happening now — and we simply drop zeros for practical reasons,” said Herrera.

“Venezuela’s budget has not been published since 2015; neither have the Central Bank of Venezuela’s figures since 2014, with some exceptions published without the frequency they had before 2014. … Solving the fiscal problem is essential. It cannot be substituted by redenominating the bolivar or dollarizing the economy,” said Balza Guanipa.