A commission of inquiry found the military guilty of the deaths of six people on Aug. 1, 2018.
By Kudzanai Abel Gerede August 21, 2021
Facebook
Twitter
Linkedin
Email 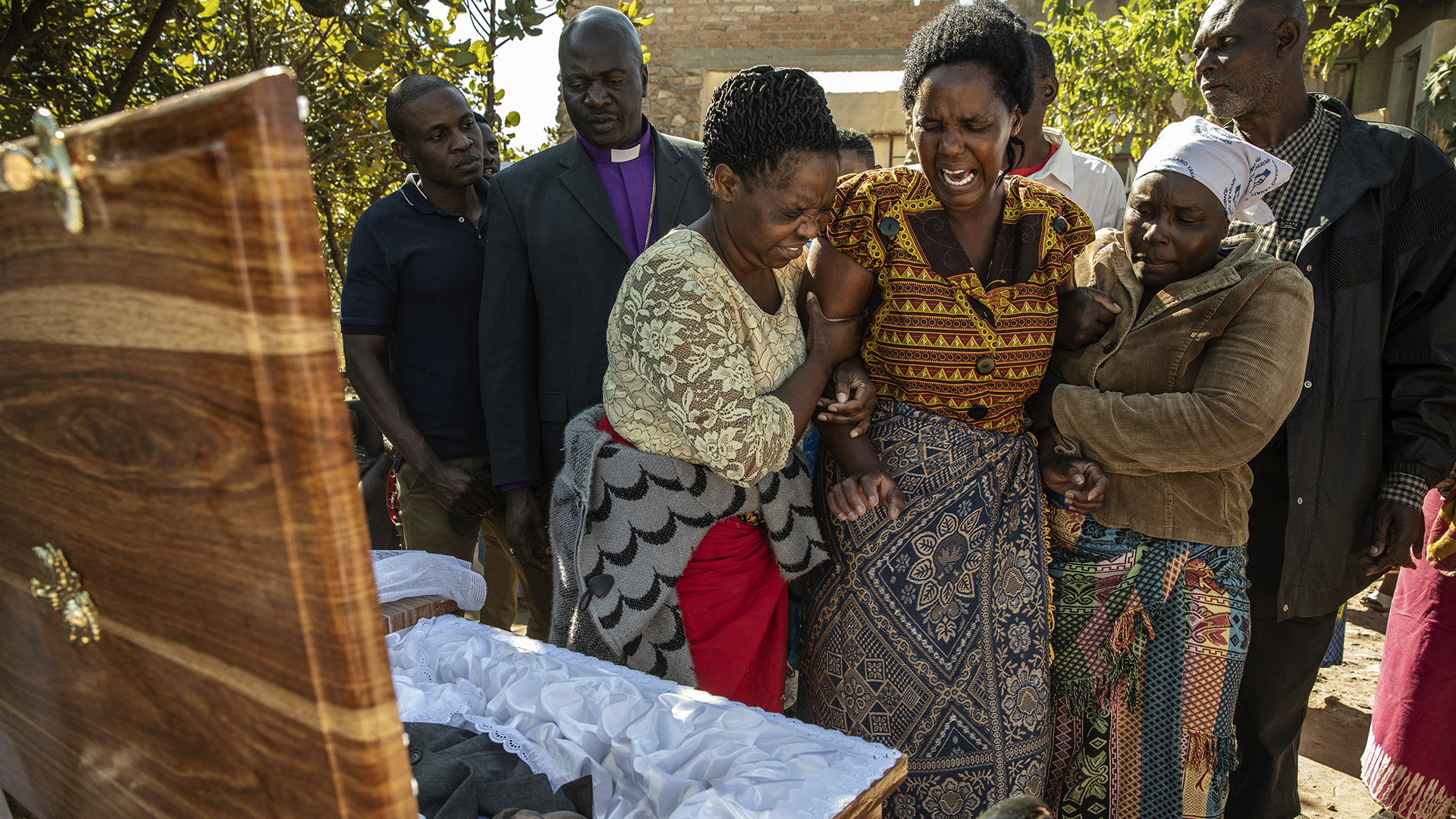 Suspicious Ziyambi, the wife of Ishmael Kumire, walks away from his coffin during his funeral on Aug. 4, 2018, in Chinamhora, Zimbabwe. Ishmael was killed during deadly clashes on Aug. 1. (Dan Kitwood/Getty Images)

HARARE, Zimbabwe — Ishmael Kumeri, a fruit and vegetable vendor, was guarding his wares during a post-election demonstration in central Harare, Zimbabwe’s capital city, on Aug. 1, 2018, when the military shot him dead.

Nothing has been forthcoming despite recommendations from a commission of inquiry into the shootings for the government to provide financial support to his family.

“I wish they never gave us hopes of being compensated,” his wife, Suspicious Kumeri, 40, told Zenger News.

“It adds more insult to what the state has already done to us. The government left us to suffer.”

She shoulders the burden of raising their four children all alone.

Ishmael and five other people died after security forces used live ammunition to break up a protest by the supporters of the opposition, the Movement for Democratic Change Alliance (MDC-Alliance) party demanding the release of presidential election results.

Thirty-five others got injured during the incident.

“Today [Aug. 2], we would be celebrating the fifth birthday of our last born, but now the date reminds me of my husband’s brutal death. He had nothing to do with politics and demonstrations. He was fending for his family when the demonstrations broke out. He was protecting his wares from the crowd, but they still shot him,” Kumeri said.

After his inauguration in August 2018, President Emmerson Mnangagwa set up a commission of inquiry chaired by former South African president Kgalema Petrus Motlanthe to investigate the incident.

The commission found that the deployment of the military to quell the riots did not comply with Section 37 (2) of the Public Order and Security Act [Chapter 11:07].

The section states that whenever police seek the army’s assistance, the military will be placed under the police command and not act independently, as it did. It held the army responsible for the killing of civilians.

The commission recommended that government compensate families of victims of the shooting, including paying school fees for their children.

Further, it called for the government to hold accountable and sanction members of the military who shot live ammunition at civilians.

Three years later, the victims’ families and civil rights activities say the government is yet to fulfill the recommendations.

However, the government claims to have done so.

“The government provided money for families to bury victims. They [families] were told to follow the due process [in seeking more compensation]. We made a resolution for families to be assisted. There was talk that the government sets up the Independent Complaints Commission. We have done that, and the Bill is in Parliament.”

But Kumeri insists that the only help she got from the government was during her husband’s burial.

Today, she stays at her marital home in Domboshava, some 30 kilometers [18.6 miles] north of Harare, with her four children, surviving on selling vegetables from their garden.

She withdrew her eldest child from a private college and enrolled her at a rural government school since she couldn’t afford school fees.

“Things got worse with the coming of the Covid-19 pandemic. I have withdrawn my eldest child from a good school and enrolled her at Parirewa High School, which is not as good as the private school.”

Local human rights pressure groups are piling pressure on the government to comply with some recommendations in the commission, including compensating victims’ families.

“The government has not told even one family to go and collect the money,” Musa Kika, executive director for Zimbabwe Human Rights NGO Forum, told Zenger News.

“I know this because we are working with them to get some form of compensation. It can take years before courts resolve claims for damages or compensation. We are facing a situation where justice is being denied essentially. It can only point to the lack of political will. These things are more political than legal. That commission was just a cover-up, a smokescreen to get people quiet. Now the recommendations are gathering dust.”

Since Aug. 1, 2018, the Zimbabwean military and police have faced accusations of human rights violations despite assurances by the government to reform the security sector.

To date, no member of the Zimbabwean military has been held accountable for the shootings of Aug. 1, 2018, despite evidence of some suspects’ pictures shooting at civilians circulating on social media.

“It is disheartening that three years after that gruesome and callous incident, the majority of victims and their relatives are yet to get even an apology,” Tapiwa Zivira, the spokesperson of the Zimbabwe Peace Project, told Zenger News.

“This shows there is still work to be done to reform the state security sector in line with the Motlanthe Commission of inquiry recommendations. We call on the government to bring to book the perpetrators of not just the Aug. 1, 2018 shootings but of all the human rights violations. We are concerned that state security agents have topped the list of human rights perpetrators for the past two years, exposing the continued need for genuine security sector reform.”