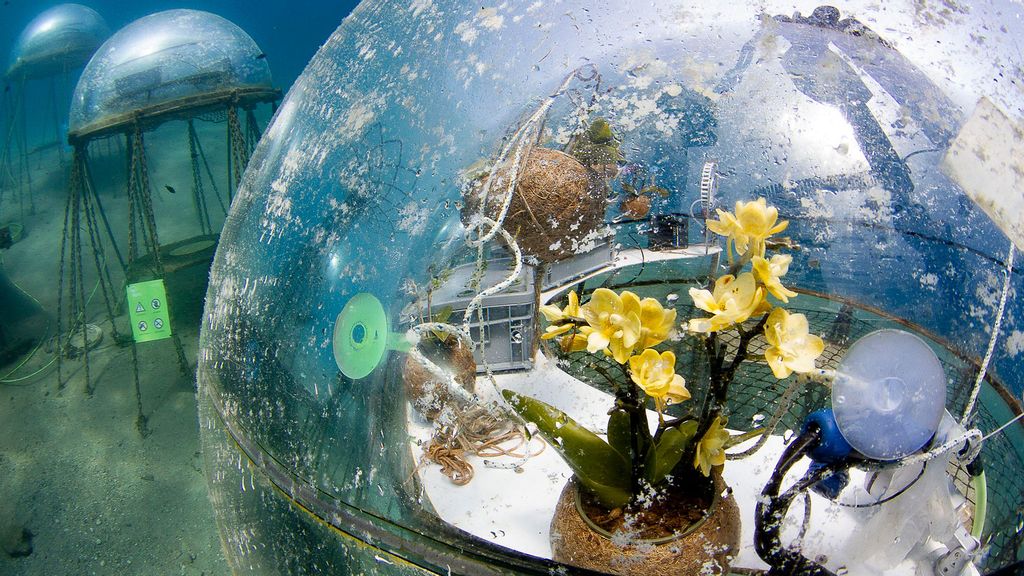 A view inside an underwater biosphere of Nemo's Garden. The plant grows in a carefully monitored environment near the botton of the sea floor in the Mediterranean. (Emilio Mancuso/Zenger)

Strawberries, basil and lettuce are flourishing in a new biosphere farm anchored to the floor of the Mediterranean Sea off Italy’s Ligurian coast.

Nemo’s Garden, which grows without soil or pesticides, sprouted from an idea by Sergio Gamberini, a scuba diver who also has a passion for gardening, according to the project’s website.

Gamberini is also the founder of diving equipment company Ocean Reef Group, and brought the idea to his team.

The self-sustainable farm has six clear plastic pods filled with air and held to the seafloor by chains and screws. The biosphere, off the coast of Noli, floats between 15 feet and 33 feet below the water’s surface, depending on the most beneficial location for the crops.

The underwater greenhouses hold about 2,000 liters of air, have carbon dioxide and oxygen sensors that monitor air quality, illumination and temperature around the clock.

The project’s aim is to create “an alternative system of agriculture for those areas where environmental conditions make plants growth difficult,” Ocean Reef’s website states.

Maintaining the conditions the plants need, such as a constant temperature, light and fresh water, are less challenging under the sea, where temperatures rarely vary and exposure to the sun is abundant.

A 12-foot tall, half-ton wireless communication system, called the “tree of life,” uses a network of sensors and gyroscopes to ensure the pods are anchored safely and do not shift out of place. Information from the sensors is fed back to the control tower on shore. The tower monitors all data and has an intercom system that allows communication with divers inside the biosphere.

Divers can be seen in the video stepping into the pods and checking on the conditions of crops.

Crops are fed with a nutrient-rich solution that is pumped directly to the roots. A solar-powered fan creates airflow inside the biosphere, reducing humidity.

A minimal amount of water is pumped into the system since the condensation system provides plenty of fresh water for the plants.

Reducing the amount of water used in agriculture is one of the key aims of the project. Ocean Reef states that traditional agriculture methods use 70 percent of all freshwater worldwide, which the project team believes is unsustainable.

The garden is visible from the surface and can easily be seen by scuba divers and freedivers, the website states. Dive centers also offer guided tours of the site.

Further research has been spurred by Nemo’s Garden, which has been rented to pharmaceutical companies to explore an alternative way to grow plants.

“These companies believe, like us, that plants grown underwater may unveil interesting discoveries for the future,” Nemo’s Garden states. “Every year, we are discovering new possible applications for the biospheres,” Gianni Fontanesi, project coordinator at Nemo’s Garden, states on the website. “These include ecotourism, fish farming, seaweed farming, or as scientific research labs or underwater stations for monitoring wildlife, scientific research, etc.”