VIDEO: Hang In There Baby: Adorable Newborn Sloth Snuggles Up With Mom 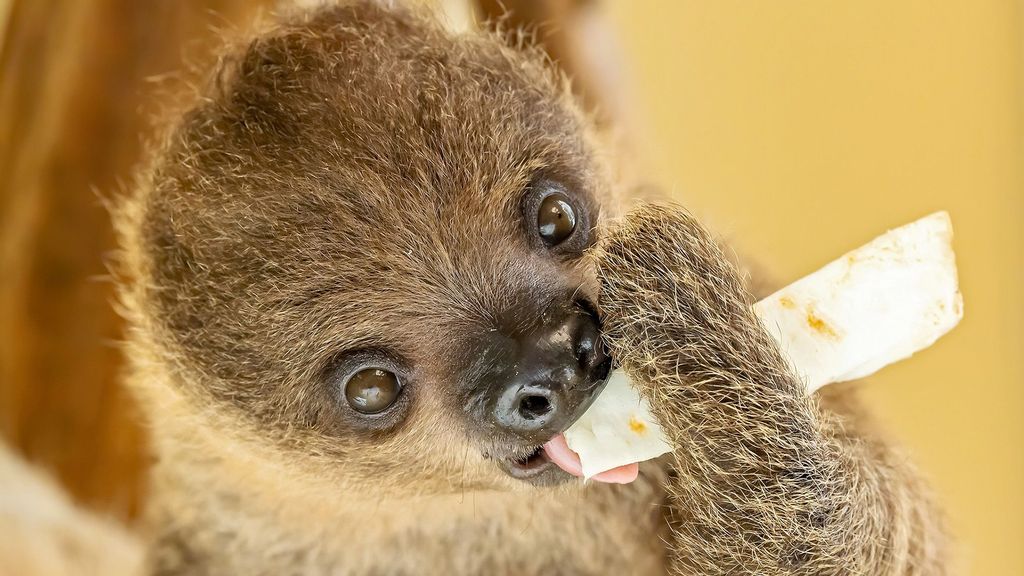 The two-toed sloth cub that was recently born in the Tiergarten Schonbrunn Zoo Vienna. It's gender is unknown, since it's still clinging to its mother. (Daniel Zupanc/Zenger)

A two-toed sloth born in an Austrian zoo is a big visitor attraction — and many saw it wrapped around its mother for the first time.

Tiergarten Schonbrunn Zoo in Vienna is now home to three sloths after mother Alberta and father Einstein welcomed their newborn on June 3.

Visitors observe the cub’s development, despite the fact it will cling to the hair of its mother’s back or stomach and hide there for its first six months.

Video shows the mother carrying her baby and attending to it.

The zoo said the cub’s gender has not been identified since it is still closely attached to its mother.

“The news of the offspring surely pleased many sloth fans. The last young sloth, Pauline, was unfortunately never seen by our visitors, due to COVID-19 measures. In the meantime, Pauline has moved to Loro Parque (in Tenerife) as part of the European Studbook and has adjusted there,” said Stephan Hering-Hagenbeck, zoo director.

The two-toed sloths are native to Central and South America. They spend most of their lives hanging upside down from trees, which is also how females give birth.

Since these predominantly nocturnal animals are unable to walk, they pull themselves hand-over-hand to move around, at an extremely slow rate. In contrast to three-toed sloths’ climbing behavior, the two-toed sloths descend head first.

They primarily feed on leaves, but also on shoots, fruits, nuts, berries, bark, some native flowers and small vertebrates. That’s in addition to the algae that grow on their fur, which they eat if they don’t get enough food.

Male sloths spend most of their days eating, sleeping and hanging around, according to the zoo. Although sloths can spend 15 to 20 hours a day sleeping, the animals are excellent swimmers.

District manager Petra Stefan said the sloth cub will be suckled for half a year. The mother sometimes carries the baby to the food bowl on her stomach, where it nibbles on vegetables such as celery and lettuce.

In collaboration with photographer Daniel Zupanc, Tiergarten Schonbrunn Zoo made a 2022 family planner, “Schonbrunn Animal Babies,” which shows a different animal each month. The young two-toed sloth is found in February.