Beetles To The Battle: Scientists Deploy An Army Of Tiny Insects To Restore Cameroon’s Dying Lake

Cameroon initiates a nature-based solution to a fast-spreading water weed that has covered 70 percent of Lake Ossa. 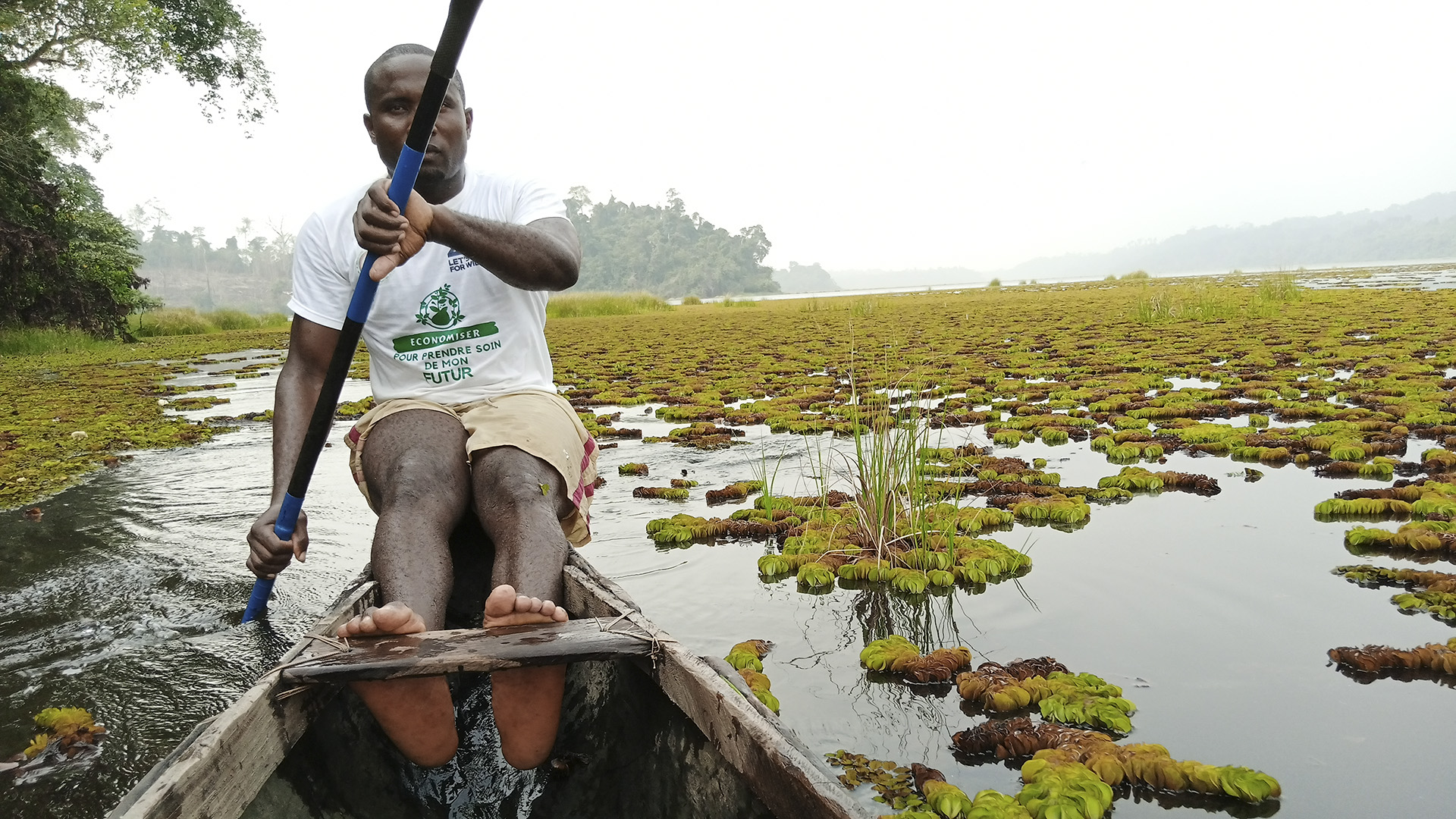 Roland Ngolle, a fisherman in Lake Ossa, says the presence of salvinia molesta makes it extremely difficult for fishermen to steer their boats in the lake. (Nalova Akua)

DIZANGUÉ, Cameroon — Scientists are preparing to deploy an army of over 6,000 water-dwelling beetles to clear an invasive water weed choking Cameroon’s Lake Ossa.

The black, subaquatic insects measuring 2-3.5-millimeter-long, called salvinia weevil, have been mass-reared for release into the lake.

Scientists experimentally released some weevils in a semi-confined lake area on July 27.

“The weevils were brought in from the Louisiana State University in the United States with the authorization of the Cameroon government,” Aristide Takoukam Kamla, founder of the African Marine Mammal Conservation Organization in Cameroon, told Zenger News.

The weed is a floating aquatic fern that thrives in slow-moving, nutrient-rich, warm freshwater. It first appeared in the lake in 2016 and regenerates within ten days, thereby decimating the lake’s ecosystem.

But the tiny weed-eating beetles could restore the lake to its former state.

“The weevil [both adults and larvae] feed on the growing buds of the floating salvinia fern,” Matthew Purcell, director of the Australian Biological Control Laboratory, told Zenger News.

The United States Department of Agriculture and the Commonwealth Scientific and Industrial Research Organisation run the facility.

“They are effective because when the bud is damaged, it will most likely cause the remainder of the plant to die and sink. It is very damaging and effective.”

The weevil feeds exclusively on the salvinia plant and will die without their host, according to scientists. This method — known as biological control — successfully suppresses invasive plant populations and restores water bodies to ecological balance.

Although native to south-eastern Brazil and northern Argentina, salvinia molesta has spread widely throughout the world during the past 50 years, choking lakes, rivers, and even rice paddies.

However, human activities fueled its spread in Cameroon.

“The nutrients [they feed on] could be coming from the industries, plantations, and hydroelectric dam reservoirs constructed upstream,” Kamla said.

“Two main nutrients needed for invasive weeds to grow are nitrogen and phosphorous coming from upstream. A 3-kilometer [1.8-mile] channel connects Lake Ossa and the Sanaga River [the largest river in Cameroon]. Once this river gets polluted, the lake also gets polluted.”

“Houses built without proper flushing systems contribute to the increase of the nutrients in the environment,” she told Zenger News.

“Pollution due to human activities favor the development of these water weeds.”

Before the weed takeover, the lake was replete with freshwater turtles, crocodiles, more than 18 families of fish, monitor lizards, snakes, aquatic birds, and the rare African manatee.

These aquatic species are now fast disappearing as a result of the presence of the water weed.

Roland Ngolle, 36, who has fished in Lake Ossa for 12 years, said the lake is losing its depth owing to the weed.

“Some portions of the lake that were three meters deep are barely a meter deep now,” he told Zenger News.

“Initially, we thought that fish were hiding beneath the weed. But we notice they are instead leaving. More than 100 fishermen used to fish in this lake every morning, but today less than five people come out to the lake each morning.”

Over 80 percent of the riparian communities used to depend on fishing for livelihoods, according to the environmental group Global Water Partnership, but have lost a similar percentage of their income.

“We are pleading with the government to assist us,” said 57-year-old Dora Sih, a mother of 12 who has been selling fish caught from the lake for the past 25 years.

“We are suffering. Things are not moving. With reduced fish supply, feeding my family is proving difficult.”

With reduced fish supply, human nutrition in riverine communities, where fish is the primary source of protein, is jeopardized, leading to poor health, according to Kenfack.

Since its first release at Lake Moondarra, Australia, in 1980, the salvinia weevil has been used to control the weed in several Asian, Pacific, and African countries.

“The weevil population follows the growth of the weed closely. In spring and summer, salvinia increases, and in turn, the weevils breed and build up populations that reduce [kill] the salvinia. The weevils only feed on the weed and will die without their host. They pose absolutely no risk to the ecosystem, only improving it by returning it to a more natural state.”

“We [first grew] a starter population in small basins and subsequently released the weevils on salvinia plants in the river,” he told Zenger News.

“It has irrefutably been proven that the insects do not form any danger to the environment or crops.”

He has coordinated tropical ecology and weed control projects in various parts of the world, mainly in Africa.

“We still do get some new infestations appearing, and once weevils are released, we typically get clearing with a season.”

“Some salvinia must be tolerated, as this sustains a population of the weevil, and complete eradication never occurs.”

Because the weevils have successfully been used in Africa to control this weed, prospects in Cameroon are excellent, Purcell said.

“Most control is achieved within three years.”