VIDEO: Spa Trek: How NASA’s Mars Curiosity Rover Is Finding Out Where All The Water Went

Rover’s samples will reveal how long the water survived on the red planet and what could have lived there. 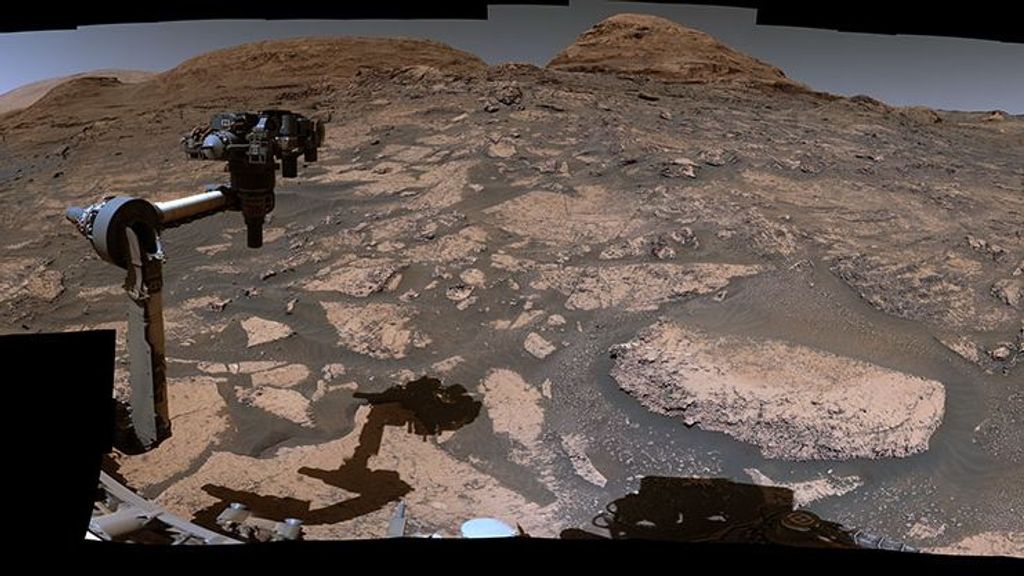 NASA’s Curiosity Mars rover captured this 360-degree view near a peak known as Rafael Navarro Mountain on July 3, 2021. The panorama is made from 129 individual images and color-corrected to simulate what daylight conditions would look like on Earth. (NASA/JPL-Caltech/MSSS/Zenger)

NASA’s Curiosity rover is still sending breathtaking images back to Earth nine years after it landed on Mars. On the red planet, 18,000-foot mountains and rocky, four-story-tall hills compete for attention with rippled fields of black sand and a horizon view that stretches 20 miles on a clear day.

Curiosity sent its latest pictures from 1,500 feet above the Martian plain, on its way up the side of Mount Sharp. The peak’s 18,000-foot height would make it America’s second-tallest mountain, eclipsed only by Alaska’s Denali — formerly Mount McKinley.

Mount Sharp sits within Gale Crater, a 96-mile-wide basin. Scientists hope they can determine what happened to the liquid that geological features suggest was once everywhere on the red planet.

“The rocks here will begin to tell us how this once-wet planet changed into the dry Mars of today, and how long habitable environments persisted even after that happened,” said Abigail Fraeman, Curiosity’s deputy project scientist, at NASA’s Jet Propulsion Laboratory in Pasadena, California.

NASA digitally stitched together 129 of the rover’s snapshots from a single day — July 3 — into a single panoramic picture. The 360-degree look at the Martian surface, NASA says, is particularly sharp because it’s wintertime, meaning there’s not much dust in the air.

Curiosity also drilled the latest in series of 32 core samples into the Martian surface, part of an effort to understand what kind of material is on the planet’s outer crust. NASA said readings from its network of spacecraft orbiting Mars show Curiosity is roving somewhere between a region enriched with clay minerals and one dominated by salty minerals called sulfates.

Analyzing what Curiosity pulls out of the holes it drills does not involve sending them back to a laboratory on Earth: It has its own on-board equipment. The mobile lab uses a drill to break samples down into a powder, and then moves them to Curiosity’s chassis where instruments determine which chemicals and minerals are present.

NASA says the mountain’s layers could reveal how, and how long ago, the ancient environment within Gale Crater dried up. Similar changes are seen across the planet.

Curiosity landed in the crater on Aug. 5, 2012, on a mission to study whether different Martian environments could have supported microbial life in the planet’s ancient past when it was home to lakes and groundwater. The rover has moved 16 miles within the crater since it arrived.

Next up for Curiosity is a trip along a winding trail between Rafael Navarro Mountain and one of those four-story hills. Then it will return to the Greenheugh Pediment, a slope with a sandstone cap that it briefly visited in 2020.

NASA has sent five rovers to Mars since the 1970s. Three are no longer operational. Curiosity was joined on the planet’s surface earlier this year by the Perseverance, whose first attempt to collect samples of Martian dirt was unsuccessful, according to NASA.