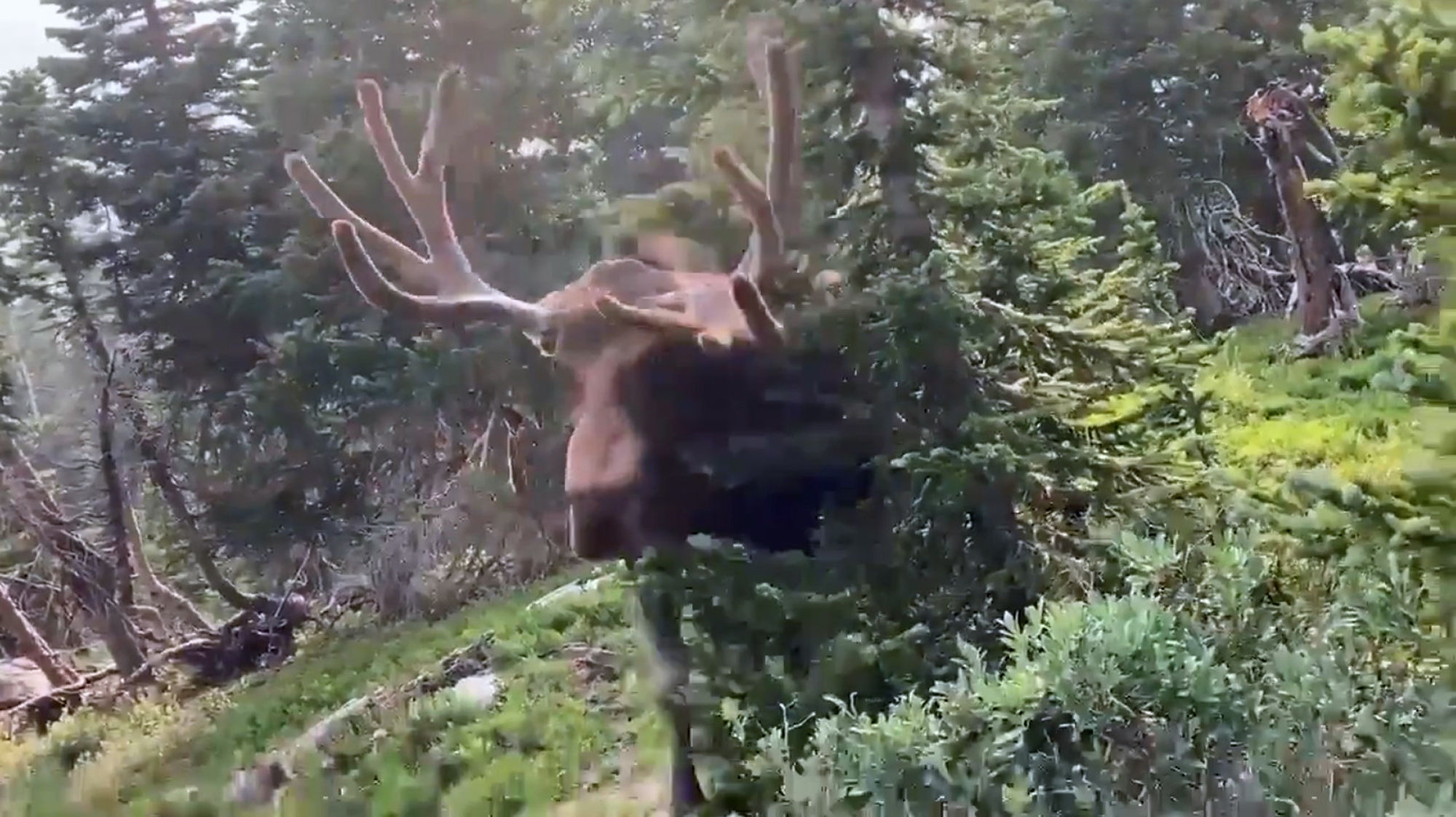 The unidentified hiker, hiding behind a tree, captures video of the bull moose as it charges. (@CPW_NE/Zenger)

A bull moose nonchalantly eating leaves suddenly charges a hiker, who hides behind a tree, fortunately hitting the tree and not the person.

Colorado Parks and Wildlife (CPW) posted video of the incident on Twitter on Aug. 8 to warn visitors about the dangers of getting too close to moose.

The video is from Clear Creek County.

“The individual just by chance came upon the bull walking along a willow bottom heading towards a lake,” CPW stated. “Thankfully no injuries occurred. This person managed to get behind a tree and the moose hit that.

“This video is an example of being too close to a bull moose and how quickly they can decide to charge on you.”

Colorado has a large moose population, “found in sagebrush, high in the mountains above timberline, as well in the more traditional willow, aspen, pine and beaver pond-type habitats,” according to CPW.

The CPW warns visitors that moose are protective of their territory and young. Since 2013, CPW has received reports of at least 15 moose attacks resulting in minor to serious injuries to visitors. In all but two cases, accompanying dogs were considered the cause of provoking the attack.

“Moose react to all dogs as they would to a wolf — one of their primary predators — by attempting to crush it with their hooves. … CPW officials recommend keeping dogs on a leash and under control when recreating in the backcountry, or consider leaving the dog at home,” the website states.

Moose have few natural enemies in the wild, CPW’s site states, “and, as a result, do not fear humans as much as most other big-game species. Moose tolerate humans longer and at closer distances. These formidable beasts need their space and must be given command and respect when observed in the wild.”

Signs of moose aggression include laid back ears, raised hairs on the neck and licking of the snout. “If a moose displays aggressive behavior or begins to charge, run as fast as you can and try to put a large object between you, such as a boulder, car or tree,” CPW advises.

“Moose tracks are very large and often show dewclaws in snow or mud. Moose sounds are limited to grunting, with bulls being the most vocal during the mating season.”

The wildlife service says moose prefer to travel in small family groups or to remain secluded.

“Moose are excellent swimmers and very much at home in the water, which can be a good place to view them,” says CPW.