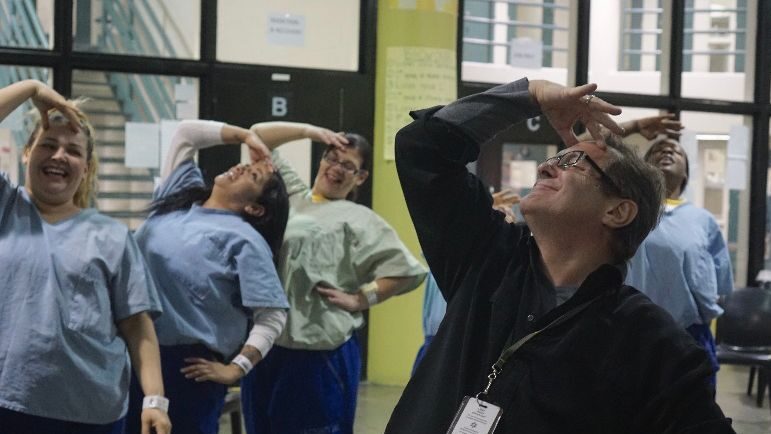 And it eventually led to an unexpected career twist — becoming director of arts education for the New York City Department of Correction.

In a conversation with writer Cris Franco, his longtime friend and fellow cast member in “Zoot Suit,” Demenkoff talks about how the power of art can heal and inspire.

Cris Franco: Tommy, how did you come to direct one of the nation’s most extensive corrections arts education programs?

Tom Demenkoff: After decades of performing, I was introduced to our incarcerated community and was blown away at the number of talented artists behind bars. I had no choice but to accept when then-Commissioner Joseph Ponte asked me to assist in establishing what is now the Fine & Performing Arts Unit within the Programs Division or DOC-Arts.

Our mission is to provide “a robust, arts education presence within all jails, by maintaining a diverse professional interdisciplinary resident arts faculty, developing support for strong and sustainable community partnerships, and cultivating reentry opportunities for our individuals in custody who wish to pursue their artistic talents and passions upon release.”

What on your professional or personal background led you to become the program’s director?

My first bowl of menudo.

Under the direction of Luis Valdez, I was privileged to experience his bold Teatro Campesino-style approach to storytelling. Immersing myself in the pachuco culture was a history lesson and acting master class in one. It forever changed me as an actor and as a human being.

Let me backtrack a little. Having been born and raised in upstate New York hardly prepared me to play a gritty pachuco in “Zoot Suit.” I acquired the necessary backbone to play the Anglo surviving in the tough streets of “East Los” from my generous Chicano cast mates, who instructed me in the nuanced language and legacy of this vibrant Latinx community of the 1940s.

During our shared meals between shows on matinée days, my friend and cast mate Miguel Delgado convinced me to try my first bowl of authentic menudo. “Zoot Suit” showed me how opening yourself up to other cultures frees you to life’s possibilities.

I was also greatly influenced by my mother, Janette Demenkoff. Mom was an activist and inspiring educator who championed literacy in public schools and launched the first national Missing Children’s Nonprofit: Child Find.

Can you recount any moments that illustrate how your program has benefited members of the incarcerated population?

There are so many inspiring stories from inside. Like when one detainee told me, “Thank you for allowing me to feel freedom today,” simply because I helped him write a haiku. Our men performed “Othello” for an invited audience, and afterward, one of the performers told me: “If I had found out how much I loved acting before I got here, I wouldn’t be here right now. I’d be on TV.”

The most memorable experience was at the Los Angeles County Jail, where I was privileged to introduce a large group of women to Maya Angelou or the writings of Pablo Neruda, Gil Scott-Heron, Nikki Giovanni or Amanda Gorman. I saw the wave of enlightenment wash over them as their words are devoured off the page.

A student who had been isolated for an extended period expressed how much he hated the national anthem. I listened and then asked him to write a new one. He did, and I surprised him by bringing in 16 vocalists from New York City’s historic Cantori Chorus to sing his version live outside his cell door. He got on the phone, called his mom, and had the chorus do an encore for her. With experiences like these, my “average” days are always way above average.

What are the challenges of running an art school in a jail?

Many. But we keep our creative options open and transform any available space into a theater, dance studio or writer’s lab. This [attitude] reinforces what we teach our students: Anyone can create art anywhere at any time. It’s empowering for students on the inside to know that artists can own their space and their work.

What type of streaming programs do you provide to your students?

There is a wide selection of programming: social services, reentry information, law library resources, high school and college courses, movies, games and arts enrichment programming. We have developed courses for all our providers to sustain their presence before COVID-19, and now … this content remains our arts education resource library.

What percentage of your students are Spanish speakers?

Approximately 33 percent, so we try to offer programming that reaches everyone’s cultural interests.

What type of programming is most popular among the [incarcerated] population?

We also offer creative writing at every level, nurturing poets, novelists, lyricists and playwrights. Playwright and fellow “Zoot Suit” cast mate Evelina Fernández allowed us to stream her yearly pageant during La Virgen de Guadalupe’s celebration presented by the Latino Theater Company. It was very well-received. Our drawing and crafting programs bring our facilities alive with beautiful murals. And, of course, comedies are popular.

I received many compliments when you requested to include “57 Chevy” into your programming.

When I heard you had turned your true-life boyhood stories about you, your dad and his beloved classic car into a play, I knew it would be an excellent offering for our students — and that it would be funny. And funny works in jail.

I chose to present “57 Chevy” because it’s about the “familia,” an important topic when you’re in jail. People in custody are constantly seeking ways to connect to those waiting for them on the outside. Because “57 Chevy” provides a lighthearted look at a normal family, it offers a natural segue into discussions about the humor in normal everyday life. (Which is what all my students hope for — a normal everyday life.)

How do you feel being part of this program has impacted your understanding of how creativity impacts our humanity?

It’s time to get real. For a good part of my early career, I was your typical self-absorbed actor. I had my share of successes, enjoyed the trappings that came with it — and wanted more.  I forgot I had set out to have a purpose in life. Sharing my acquired skills with those in jail was the dramatic change I needed.

What advice do you have to those educators interested in bringing arts to disadvantaged or disenfranchised communities?

I was fortunate that in the 1970s while performing in the original NYC production of Steven Schwartz’s musical “Godspell,” I signed up for an outreach event with the cast. I went out to Rikers Island to perform the show. It was my first time in jail and what struck me was how actively the audience interacted with the show. It was jarring at first and then quickly became something more meaningful.

My advice is to encourage young creatives to take a leap. Go act, write, sing or dance where there is no writing, acting, singing or dancing. Sign-up for all the outreach endeavors in which your theater company or productions might be involved. And, if there are none, start one. Or two. Or a dozen. There are many schools, community centers, museums, hospitals, therapeutic communities and prisons in desperate need of arts programming.

Art is a celebration of our humanity through a glorious expression. No school will train you how to do this level of outreach, so work under the guidance of an experienced professional. And don’t be afraid to volunteer. Show up. Soar!

For more information on how you can contribute creative content or develop a partnership with the New York City Department of Correction, write to Tom Demenkoff via: [email protected]