About 1.2 million people, including 540,000 children, have been affected by the powerful earthquake that hit Haiti. 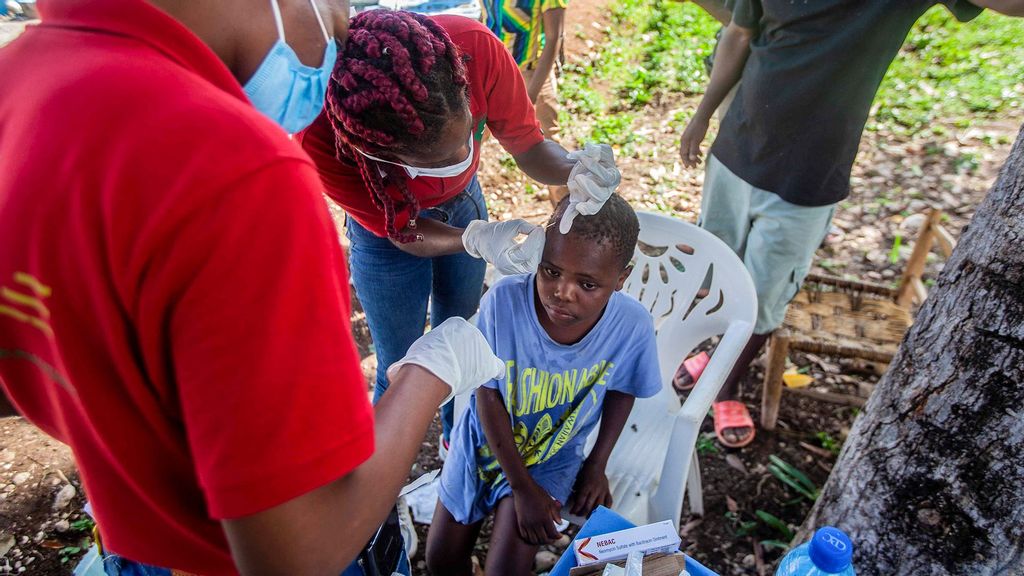 A boy is tended to after a 7.2-magnitude earthquake struck Haiti on Aug. 18, 2021 in Boiron Zone, Camp-Perrin, Haiti. (Richard Pierrin/Getty Images)

PORT-AU-PRINCE, Haiti — The United Nations Children’s Fund said that about 1.2 million people, including 540,000 children, have been affected by the powerful earthquake that hit Haiti on Aug. 14.

Already battered, departments of South, Nippes, and Grand’Anse are now getting drenched by the Tropical Depression Grace, which is further disrupting access to essential services like water and shelter, said United Nations Children’s Fund in a statement.

“Magnitude 7.2 #earthquake in Haiti Much damage reported in the South and Grande Anse. Move away from your homes to avoid further shaking. Take care of the children,” tweeted United Nations Children’s Fund Haiti.

Flooding and mudslides are likely to worsen the situation of vulnerable families and further complicate the humanitarian response.

Search and rescue efforts are underway, with official reports of over 1,941 deaths and 7,000 injured.

More than 84,000 houses have been damaged or destroyed, including public infrastructure, including hospitals, schools, and bridges.

“Today, I’ve toured many schools with the Minister of Education Marie Lucie Joseph and assess. But the situation is a disaster. In the Sud Department, 20 schools are fully destroyed, and 74 others are partially so,” tweeted Maes.

“Countless Haitian families who have lost everything due to the earthquake are now living literally with their feet in the water due to the flooding.”

“Right now, about half a million Haitian children have limited or no access to shelter, safe water, health care, and nutrition,” said Maes.

Criminal violence and insecurity complicate the humanitarian response, and gangs control the main road from Port-au-Prince to the country’s south. Nevertheless, United Nations Children’s Fund could reach affected areas with medical supplies within hours of the earthquake.

In the courtyard of one hospital, United Nations Children’s Fund installed tents to shelter patients who feared the building could collapse.

United Nations Children’s Fund estimates that it will need $15 million to respond to the most urgent needs of at least 385,000 people, including 167,000 children under the age of five for eight weeks.

The UN agency said that this initial funding requirement will be reviewed and adjusted in the coming weeks as the impact on children and families becomes clearer.

US President Joe Biden expressed his condolences regarding the incident.

“In what is already a challenging time for the people of Haiti, I am saddened by the devastating earthquake that occurred in Saint-Louis du Sud, Haiti, this morning,” said Biden in a statement.

“We send our deepest condolences to all those who lost a loved one or saw their homes and businesses destroyed. I have authorized an immediate US response and named United States Agency for International Development Administrator Samantha Power as the senior US official to coordinate this effort.”

«Previous Post
VIDEO: Shark Gives Birth To ‘Miracle’ Baby Despite Never Having A Male In Her Tank»Next Post
The US To Roll Out Covid-19 Vaccine Booster Shots In September: Health Officials