The study shows that when a collective group consumes resources together, the surrounding ecosystem is more resilient.
By Zenger News Desk August 19, 2021
Facebook
Twitter
Linkedin
Email 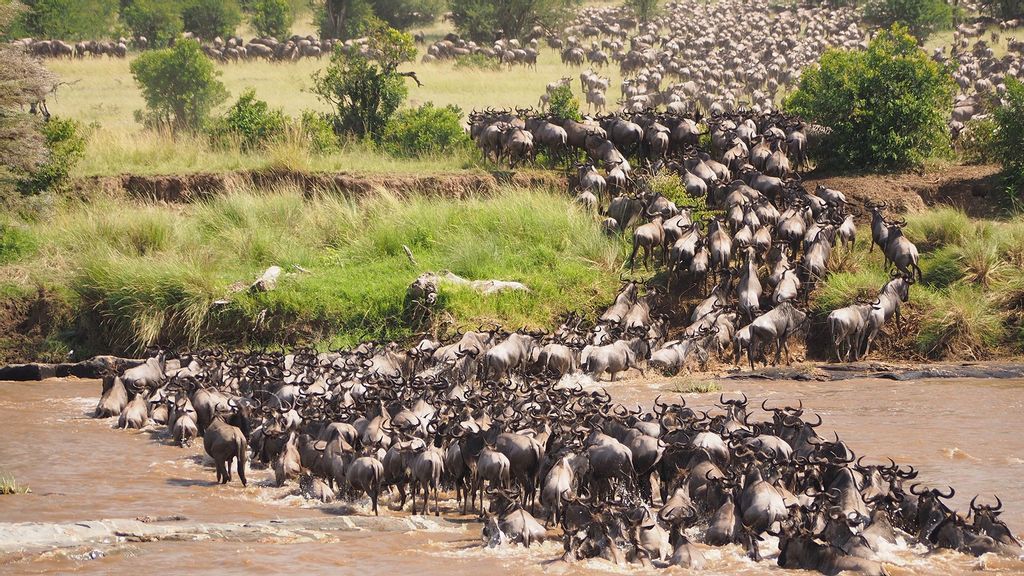 (Representative image) New research has shown that schools of herring, herds of wildebeest, and countless other groups of organisms that act in concert can help complex ecosystems maintain their diversity and stability. (Jorge Tung/Unsplash)

WASHINGTON — New research by Oregon State University has shown that schools of herring, herds of wildebeest, and countless other groups of organisms that act in concert can help complex ecosystems maintain their diversity and stability.

The study “Collective behavior can stabilize ecosystems” is published in the journal “Nature Ecology and Evolution.”

The study demonstrated that when individuals band together to consume resources as a collective group, the surrounding ecosystem is more resilient and supports a more comprehensive range of species.

The findings could be an essential step toward understanding how living systems stay on an even keel; collective behavior is ubiquitous on the planet, playing a prominent role in everything from bacterial biofilms to human cities.

“These collectives show highly organized, large-scale patterns in behavior that emerge spontaneously from localized interactions among nearby individuals,” said Benjamin Dalziel of the Oregon State University College of Science.

“Our question was, what is the significance of collective behavior in ecosystems?” said Dalziel.

Dalziel and colleagues found emergent social-ecological feedback between the size and structure of the collective groups and the level of resources in an ecosystem. This feedback buffered the system against crashing. The feedback dampened fluctuations in resource abundance and allowed more consumer species to persist using the same resource instead of the stronger competitor pushing, the weaker one to extinction.

Dalziel, a population biologist, led a collaboration that examined the ecological significance of collective behavior through the lens of two enduring ecological puzzles: the paradox of enrichment and the paradox of the plankton.

The paradox of enrichment is seen when, in a predator-prey model, an increase in available food for the prey results in the predator’s population growing unsustainably big and destabilizing.

The paradox of the plankton refers to diverse ecological communities, such as different types of phytoplankton, persisting even though lots of similar species are vying for finite resources.

“It is not a given that complex ecosystems will be stable — if you just throw a bunch of species together in an environment, theory tells us the result will likely be ecosystem collapse,” said Dalziel.

“That means real ecosystems must have some kind of special sauce that allows them to persist with a diverse array of species,” said Dalziel.

It turns out that collective behavior — occurring among plants and microorganisms, animals and people — could be a potent ingredient of the sauce, the researchers found.

Dalziel and Mark Novak of the College of Science, plus James Watson of the Oregon State College of Earth, Ocean, and Atmospheric Sciences and Stephen Ellner of Cornell University, started with a standard model of a simple food web: two generic “consumers” feeding on a shared resource.

A battery of equations expresses the model’s multiple variables: consumer mortality rate and per-capita resource consumption. Still, in this model version, the consumers differ only in the efficiency with which they capture the resource.

“We constructed simulations in such a way that we could turn collective behavior on and off without changing anything else in the system,” said Dalziel.

“What we found was that adding collective behavior was a game-changer in the simulations — it stabilized ecosystems that ecological and evolutionary theory clearly say should not otherwise be stable,” said Dalziel.

That was a piece of the knowledge puzzle that had been missing, he said, noting that much work had been done to understand how individual local behavior scales up to affect group-level behavior and how those groups process information, but not much about why collective behavior happens in the first place.

“Amidst the challenges we face with the spread of misinformation online, which also involves collective dynamics, here is an example where collective behavior plays a fundamental role in supporting life,” said Dalziel.

“And I also think it’s neat that such an aesthetically striking aspect of ecosystems — the flocks of birds, etc. — could also play an important role in their stability and diversity,” Dalziel concluded.

The National Science Foundation, the Defence Advanced Research Projects Agency, the National Institutes of Health, and NASA supported this research.