Food For Thought: Cuttlefish Have Sharper Memories In Old Age Than Humans

Can you remember what you ate for dinner last Tuesday? These fish can.
By Martin M Barillas August 19, 2021
Facebook
Twitter
Linkedin
Email 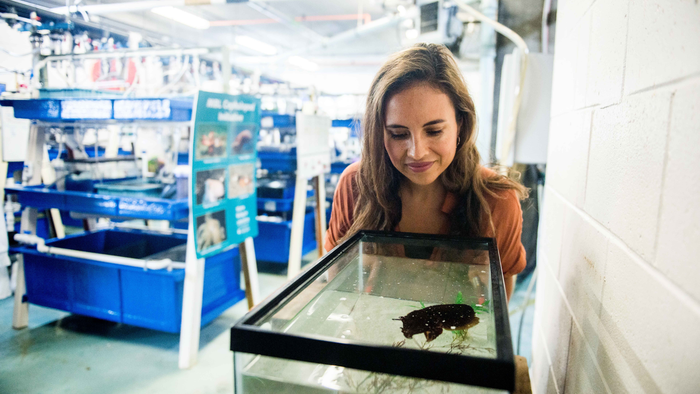 The University of Cambridge's Alexandra Schnell at a tank containing cuttlefish used in a recent study on memory at the Woods Hole Marine Biological Lab. (Grass Foundation)

Unlike humans in old age, cuttlefish can remember when and what happened to them even to the last days of life, a new study on their feeding habits has found.

“Cuttlefish can remember what they ate, where and when, and use this to guide their feeding decisions in the future. What’s surprising is that they don’t lose this ability with age, despite showing other signs of aging like loss of muscle function and appetite,” said Alexandra Schnell of the University of Cambridge, lead author of the study published Aug. 18 in the Proceedings of the Royal Society B.

Cuttlefish resemble their cousins, the octopus, squid and nautilus, and are found in oceans around the world. An international team of scientists conducted tests with 24 specimens of Sepia officinalis, the common cuttlefish, and found the first evidence of an animal whose memory of specific events does not fail with age.

Over time, humans typically lose their ability to recall events that occurred at particular times and places. For example, people forget what they ate a week ago. This episodic memory, and its decline, may be due to a region of the brain called the hippocampus.

Cuttlefish live just 2 years, which makes them good subjects for testing whether memory declines with age. It is not possible to test whether animals consciously remember anything, so the study’s authors used the term “episodic-like memory” to refer to cuttlefish’s ability to remember what, where and when specific things happened.

Half of the cuttlefish studied were 10–12 months old, while the other half were 22–24 months old — equivalent to people age 90 and over.

The researchers experimented with the cuttlefish after training them to approach a specific place in their aquarium marked with a black and white flag. Then they learned that two foods they commonly eat were available at specific flag-marked locations and after specific delays.

At one spot, their less-than-favorite food, king prawn, was provided after a black and white flag was waved. They were offered their favored live grass shrimp at a different spot where another flag was waved — but only every three hours. This was repeated for four weeks.

The cuttlefishes’ memory of which food would be available, and where and when, was tested. To prevent the cuttlefish from simply learning a pattern, the two feeding locations were unique each day.

Cuttlefish, young and old, were observed watching which food first appeared at each flag and then selecting the best feeding spot at each subsequent flag-waving. According to the authors, this may mean that episodic-like memory does not decline with age among cuttlefish, unlike in humans.

Cuttlefishes’ memory also serves them in finding mates, which comes only near the end of their lives. Because they remember their previous mates, and how long ago they mated, the researchers concluded that this allows them to mate with as many partners as possible and thus disperse their genes more broadly.

“The old cuttlefish were just as good as the younger ones in the memory task — in fact, many of the older ones did better in the test phase. We think this ability might help cuttlefish in the wild to remember who they mated with, so they don’t go back to the same partner,” said Schnell.

The study could wind up having some wider-ranging implications, researchers say.

“We have studied cuttlefish extensively in the field and laboratory for decades, but these sophisticated behaviors are a surprise even to us,” said Roger Hanlon of the Marine Biological Laboratory at Woods Hole, Mass., where the experiments were carried out. “There are many discoveries still to come in the link between brain and behavior.”

In addition, “These initial results suggest that cuttlefish are valuable models for investigating the natural mechanisms that protect complex memory from the effects of aging,” the study’s conclusion notes.