#FixTheCountry: Ghanaians Take To The Streets And Social Media To Demand Constitutional Changes

Ghanaians protest over a range of issues, including a limping economy and suppression of press freedom. 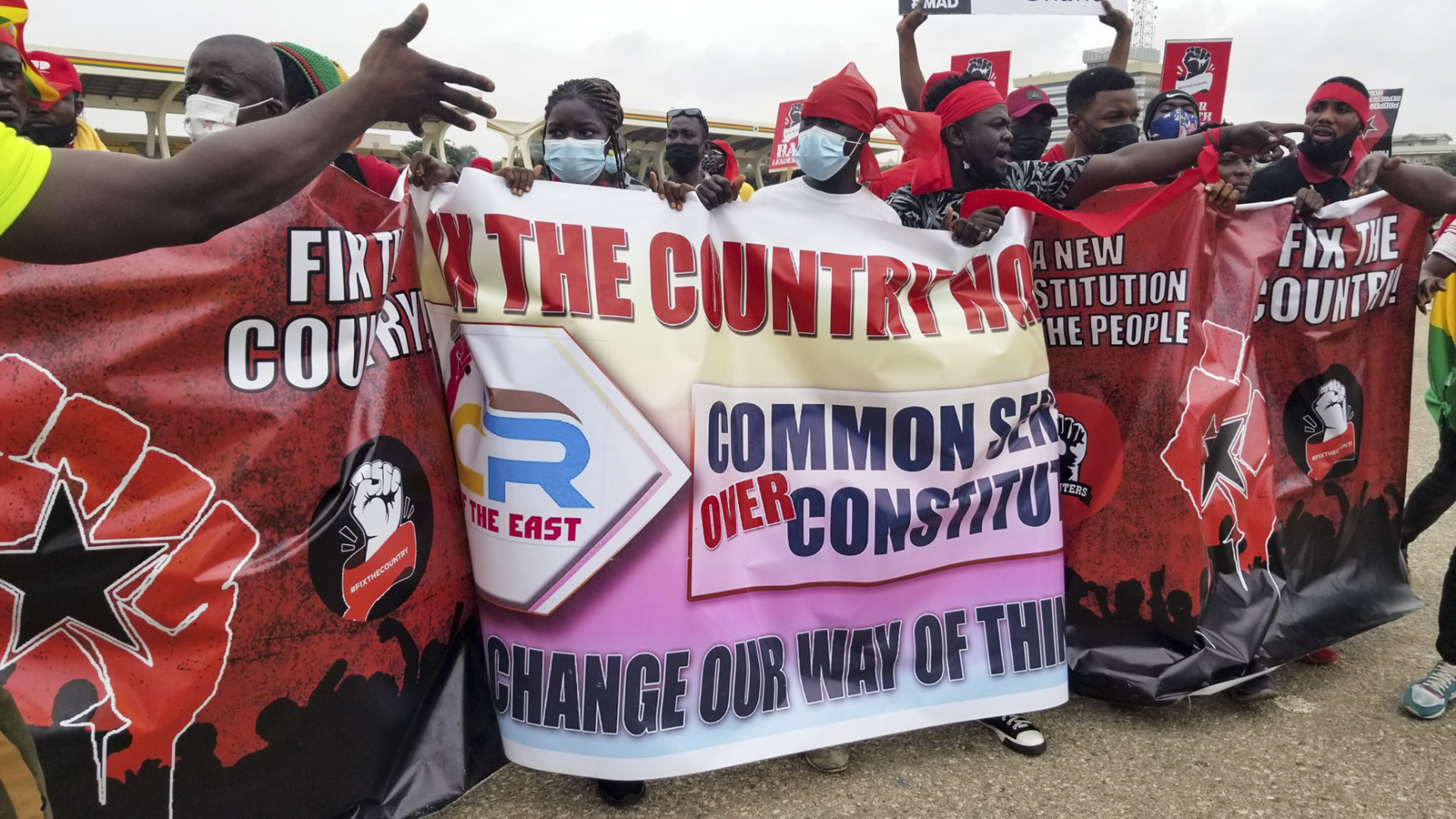 Protesters wielded banners with inscriptions like “#FixTheCountry: Common Sense Over Constitution” as they marched on Aug. 4 in Ghana. (Zubaida Mabuno Ismail)

ACCRA, Ghana — All his life, Solomon Quao Kummey, 72, from Nungua in the Greater Accra region in Ghana, had never participated in an anti-government demonstration.

But on Aug. 4, aided by a walking stick, he joined thousands of young people in the capital Accra protesting the country’s alleged “bad” leadership.

“This is an opportunity I have been waiting for the past 12 years [since retiring from the civil service],” Kummey told Zenger News.

“The time has arrived for me to stand with the youth and to tell them that time has come for them to liberate themselves from the economic shackles. It is the first time youth are defending themselves against bad leadership.”

Clad in white robes, Kummey, a former civil servant in the country’s oil sector, gingerly marched 15 kilometers (9.3 miles) in three hours. The destination was Black Star Square, where Ghana got its independence from Britain in 1957.

All around him, thousands of youth, wearing the red, yellow, black, and green colors of Ghana’s national flag, sang the country’s national anthem over and over.

They waved placards conveying their grievances, such as “Stop Tribal Discrimination”, “Reduce Fuel & Gas Prices”, “Ghanaians Are Tired of Dictatorship”, and “Change the 1992 Constitution”.

The peaceful demonstrations happened on Founders Day, a symbolic day to the protestors since it commemorates the birthday of the country’s founding president Kwame Nkrumah.

Organizers of the protests claimed this was the first-ever youth-led, non-partisan protest in Ghana since the coming of the Fourth Republic in 1992.

“This is a sure will for young people to liberate themselves and to speak truth to power,” Ernesto Yeboah, leader of the Economic Fighters League, one of the organizers of the protest, told Zenger News.

“We’ve been so afraid for a long time, but I want to be sure that today marks the beginning of the end of that fear. What you see here is the future. We’re here to say that we’re not happy with the future that awaits us, and we want it to change.”

In particular, the youth want the country’s 1992 Constitution, which has witnessed the swearing-in of five presidents under the Fourth Republic, changed.

“What we have is not a constitution; it is a notebook for stealing and rigging the state. We’re so afraid to imagine something beside NDC [National Democratic Congress], NPP [New Patriotic Party], and that’s why they’re stealing and wrecking us in broad daylight under the guise of a Constitutional leadership,” Yeboah said.

The National Democratic Congress, formed in 1981, and the New Patriotic Party, formed in 1992, have interchangeably ruled for Ghana for 40 years. However, political activists say the parties no longer embody the aspirations of the country’s youth.

Yeboah said the 1992 Constitution is a parliamentary product and did not originate from the masses; hence, the document takes care of the interests of members of parliament at the expense of the ordinary man.

For months, Ghanaians have taken to #FixTheCountry on social media to voice their frustrations over the state of affairs in the West African country.

Plans are underway to take the protests countrywide, particularly to press for constitutional changes, said Mawuse Oliver Barker-Vormawor, a Ghanaian living in Cambridge, the United Kingdom, and one of the organizers of the demonstrations.

But speaking to the media on the sidelines of the 29th anniversary of the ruling New Patriotic Party on Aug. 5, the party’s 2020 campaign manager in Accra, Peter Mac Manu, said the demonstrators’ demands are “not genuine”.

“The good people of Ghana will judge between their demands and what’s happening,” Mac Manu told Zenger News.

“I believe they were making spurious demands because where we took the country from and where we have brought it now and where we intend to move it to, the Ghanaian people will appreciate our work.”

Ghana, which prides itself on being the first African country to attain independence, is faced with 12 percent youth unemployment and more than 50 percent underemployment, both higher than overall unemployment rates in Sub-Saharan African countries.

Ghana’s economy contracted by 3.2 percent and 1 percent in the second and third quarters of 2020, respectively, pushing the country into a recession for the first time in 38 years, according to the World Bank.

The dire economic situation is one of the triggers of the protest that attracted Ghanaians from all regions and walks of life of the country to demand accountability from their leaders.

Ernest Bortey, a resident of the Greater Accra Region, said he came back to Ghana from the United States of America in 2016 to start businesses. But his business dreams have withered in Ghana’s harsh business environment.

“I own three businesses, but I can hardly feed my family and pay bills,” Bortey told Zenger News.

“We are subjected to slavery abroad and cannot be slaves in our motherland.”

Nepotism and cronyism allegations have bedeviled the government of Akufo-Addo, who appointed his cousin, Ken Ofori Atta, Ghana’s finance minister, in 2017.

There are also worries about deteriorating press freedom in Ghana the country.

“It’s time to demonstrate and live the talk of what we have been talking about on radio and TV.”

Critics, however, say the protests are not institutionalized long enough to guarantee their longevity and will fizzle out soon.

“These are usually one-time spontaneous activities,” Kobby Mensah, a political marketer and a lecturer at the University of Ghana Business School, told Zenger News.

“It’s erroneous to suggest that because of the media attention on it is gradually waning; it means that it hasn’t been in the consciousness of people. What is important is the message. Have they driven home the message? Of course, they have. The frantic efforts by the government to deliberately quash any dissent tells you that it’s been effective. The organization itself will not exist for long, but the most important thing is the message has been driven home.”

Mensah said that the #FixOurCountry movement could affect the political fortunes of the ruling New Patriotic Party in 2024 when Ghana goes to parliamentary and presidential polls.

“They promised so much, and they’ve done little. And definitely, it will impact negatively on this administration because people would not have the same level of confidence that they did before they started in 2016.”