Afghan Military Officers: We Fought Hard But Biden ‘Abandoned’ Us

Afghan National Army officers who vainly fought to save Kabul say their defeat was manufactured in Washington, D.C. 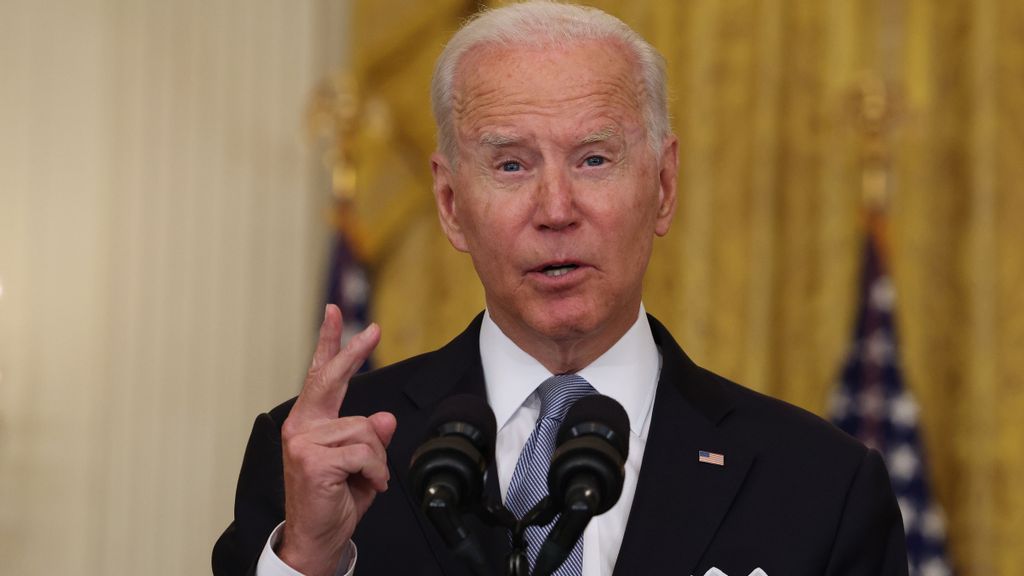 U.S. President Joe Biden gestures as he gives remarks on the worsening crisis in Afghanistan from the East Room of the White House August 16, 2021 in Washington, DC. Biden cut his vacation in Camp David short to address the nation after the Taliban seized control in Afghanistan two weeks before the U.S. was set to complete its troop withdrawal after a costly two-decade war. (Anna Moneymaker/Getty Images)

While President Joseph R. Biden faults Afghanistan’s leaders and soldiers for their own defeat, Afghan National Army officers, who vainly fought to save Kabul, say their defeat was manufactured in Washington, D.C.

As the Taliban reached Kabul’s outer ring of defenses, Zenger reporters in Pakistan and India used their personal networks to conduct a series of interviews with senior Afghan military officers who were leading active fighting units. Their accounts differ sharply from the White House’s published talking points.

Biden said Afghan forces were “not willing to fight for themselves” and critically noted President Ashraf Ghani’s sudden departure as Taliban forces closed in. “Mr. Ghani insisted the Afghan forces would fight,” Biden said, “but obviously he was wrong.”

These Kabul-based military officers point the finger of blame in the other direction. The U.S. made it all but impossible for the Afghans to fight, said one Afghan National Army lieutenant colonel. Zenger reporters spoke to him over a series of days as he led a portion of the defense of Kabul, then retreated with his unit into the city while fighting a series of street battles. He is now in hiding with his family.

The army officer is one of several Afghan officers interviewed by mobile phone during the siege and fall of Kabul.

He explained why he thinks the blame lies with President Biden, not the Afghan president or the Afghan army. The Afghan army relied on a network of planes and helicopters to deliver food, fuel, and ammunition to outlying outposts. Helicopters were needed to ferry the wounded and deliver replacement soldiers. Even the bases on Kabul’s mountainous approaches had to be supplied by helicopters.

While the Afghan Army had one of Central Asia’s largest fleet of choppers, he said, virtually all the mechanics and maintenance crew were U.S. contractors, many of which were withdrawn months ago. Helicopter repair facilities and spare-parts warehouses were largely located at Bagram Air Base, which was shuttered by the U.S. military several weeks before the Taliban took control. Fuel, once delivered by the U.S., was also in short supply. “The Americans abandoned us,” the 36-year-old Afghan National Army lieutenant colonel told Zenger. “The plan was not to abandon a country in a situation like this.”

From Washington, the Afghan defeat is seen as a lack of willpower. Biden had “said in July that the Afghan military had the capability to fight the Taliban,” he said Sunday. “But they had to demonstrate the will. Sadly, that will did not materialize.” President Biden’s speech mirrored a talking points memo that House Speaker Nancy P. Pelosi distributed to fellow Democrats on Monday.

The Afghans see their defeat as stemming from a lack of logistics, not a shortage of fighting spirit. The U.S. “did not give us the opportunity to reorganize the requirements for our defense and security forces, or to manage what we needed for this war,” the Afghan lieutenant colonel said. “As you know, they only gave three months … that’s not sufficient.”

The Americans were racing to leave before President Biden’s Aug. 31 deadline. The final scraps of U.S. military support stopped on Aug. 13, he said. The Taliban seized Kabul on Aug. 15.

Another officer, a corps commander, described a bloody fight in the corridors of his besieged headquarters in Herat, a sprawling city that sits atop a strategic and ancient trade route to Iran. Kabul, 500 miles to the east, had few working helicopters to provide relief or rescue. The Afghan soldiers had fought on longer than anyone thought they could.

Ultimately, the corps commander was forced to surrender on Aug. 12 as Herat fell. His men were captured and kept “without water, food, anything,” he said. He’s unsure exactly for how many days he was a prisoner.

After being beaten and humiliated, he said, he and his men were given some stale bread and well water. Their captors, who describe themselves as religious students — the literal meaning of “taliban” in Pashto — stole their money and other belongings.

The Taliban, the corps commander said, also don’t differentiate between soldiers and the journalists covering them at their headquarters. “This situation which I saw with my own eyes. … They start hitting people with the butt of weapons, and all these things,” he said. “Journalists. Cameramen.”

They were released, unarmed, to walk into the wild desert lands outside Herat and find what shelter they could.

While Biden has credited the Taliban with providing “safe passage” for some 15,000 American citizens and legal U.S. residents believed to be trapped behind Taliban lines, former Afghan army officers say they see little evidence of humane treatment.

The 26-year-old corps commander describes his journey from Herat back to Kabul as a tour of abuses carried out by the Taliban. He saw roving bands of Taliban beating and robbing their own countrymen. He eventually found shelter with some of his extended family and is “very scared” to go outside. Taliban patrols are banging on doors, looking for anyone linked to the defeated democratic regime, he said.

Given the Taliban’s active hunt for Afghan National Army officers and their documented history of public executions for even minor offenses, Zenger is withholding the military officers’ names. This is an extraordinary departure from Zenger’s policy of publishing the name of every source quoted in its stories. The lieutenant colonel told Zenger that he, his wife and their children are already in danger. “I don’t want to become a prisoner for the Taliban. … I am so worried for my family,” he said.

Biden said on Aug. 19 that he had compassion for women who massed at the gates of the Kabul airport, trying to exit Afghanistan with their children. “As many as we can get out, we should,” he said. “For example, I had a meeting today for a couple hours in the Situation Room just below here. There are Afghan women outside the gate. I told ’em, ‘Get ‘em on the planes. Get them out. Get them out. Get their families out if you can.’”

But the Afghan lieutenant colonel said he and his family are marooned, without options. He has worked closely with American forces, he said, and “trained with American officers at the Army Command and General Staff College” in Leavenworth, Kansas. But the U.S. embassy in Kabul denied his request to evacuate his family before diplomats fled. “I can’t get asylum in the U.S. because they said that they don’t have the authority to provide any asylum support to an Afghan government active-duty personnel,” he told Zenger.

The corps commander is also trapped: “The Taliban is roaming here, everywhere. I am inside my house. Even I can’t go outside my house because of the high level of threat which is over here. So I am very scared, you know.”