VIDEO: It’s A Tusk Job But Somebody’s Got To Do It 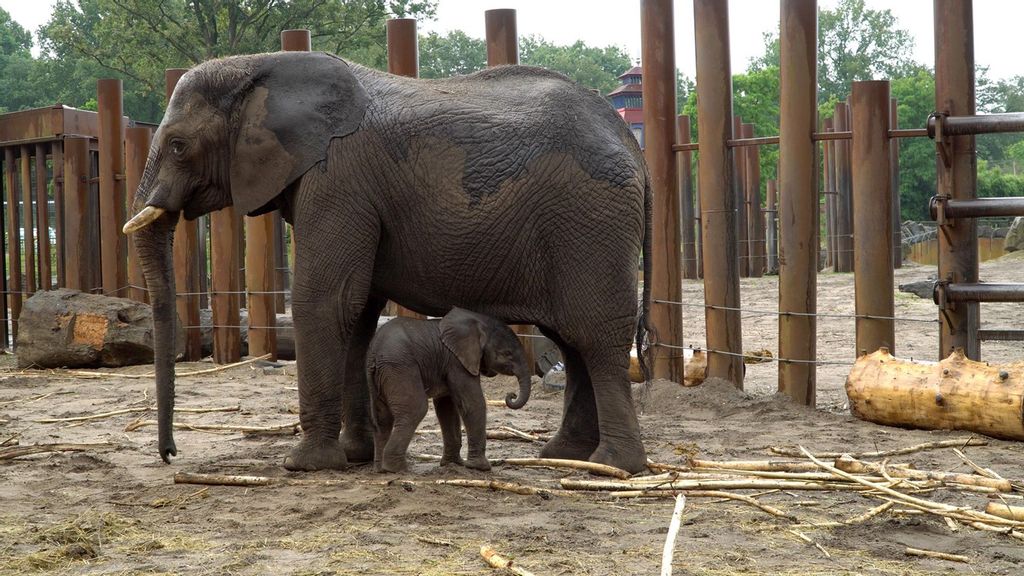 African elephant Duna gave birth to a male calf on Aug. 16 in Ouwehands Zoo in the Netherlands. The zoo is part of a project to protect the endangered species. (Ouwehands Zoo Rhenen/Zenger)

An elephant in a Netherlands zoo is allowed to keep her baby — despite the fact she attacked her previous newborn, resulting in life-threatening consequences.

African elephant Duna, from the Ouwehands Zoo in Rhenen, gave birth to a healthy male calf on Aug. 16.

Duna had unexpectedly attacked her three-day-old calf in 2018. The injuries were so severe — a broken back — the calf was euthanized.

After elephant bull Tusker came to the Ouwehands Zoo from Germany as part of an international breeding program, Duna became pregnant again in November 2019. The zoo’s goal is to keep the African elephant population genetically healthy.

The new arrival stays close to its protective mother in video posted on YouTube.

In order to prevent Duna from attacking her calf, Ouwehands zookeepers decided not to clean the enclosure for a couple of days. That meant they didn’t “have to lock them up together in one of the stables,” giving the animals added space inside and outside.

“Because we don’t have a bull, one of the females uses the bull house. They also use the outdoor area a lot now because it’s summer. The previous calf was born in the winter,” zoo staff said.

The average gestation period of an elephant is 22-23 months, but Duna gave birth earlier than expected, at 20 months. She delivered her calf at the zoo’s African elephant enclosure and was supported by her buddy, Tembo, during the delivery.

“The first 30 minutes after the birth were just as exciting, but in the end the elephant stood up on its own,” a spokesperson for the zoo said.

The calf, which has not been named, has already shown interest in his surroundings, the zoo stated.

Visitors to Ouwehands Zoo are able to see mother and calf outside, from a distance.

African elephants are listed as critically endangered on the IUCN Red List of Threatened Species. The wild elephant numbers are declining because of habitat loss and fragmentation, as well as poaching for the illegal ivory trade. Elephants are killed for their tusks.

African elephants are the largest animals on the planet. Their herds wander through 37 countries in Africa. Adults can reach 24 feet in length and 13 feet in height and weigh up to 11 tons.

To help the wild African elephants survive, Ouwehand Zoo Foundation has partnered with the Big Life Foundation to safeguard the elephants and their habitat, so they are protected from poachers and forest destruction.