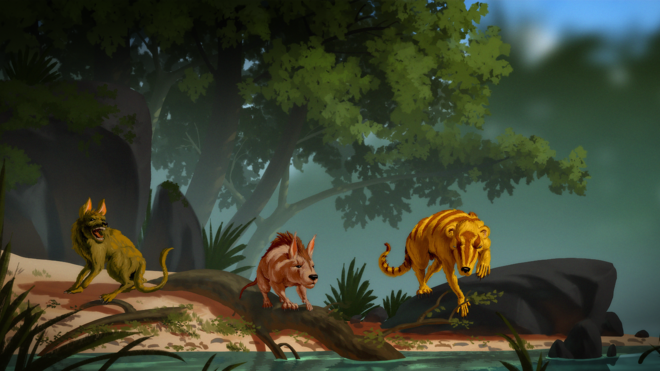 The extinction of the dinosaurs at the end of the Cretaceous Period brought the dawn of the “Age of Mammals,” and three newly discovered species from the time show that mammals were evolving and diversifying even faster than previously thought.

The new creatures differ in size; one was as large as a modern domestic cat. When dinosaurs ruled the earth, mammals were about the size of mice.

The species — Miniconus jeanninae, Conacodon hettingeri and Beornus honeyi — lived in North America some 66 million years ago. All three were placental mammals, as were other archaic ungulates (or condylarths), which are remote ancestors of hoofed animals, such as horses, elephants and hippos.

The mammals were described by University of Colorado, Boulder paleontologists in the Journal of Systematic Palaeontology.

“Previous studies suggest in the first few hundred thousand years after the dinosaur extinction (what is known in North America as the early Puercan) there was relatively low mammal species diversity across the Western Interior of North America. But the discovery of three new species in the Great Divide Basin suggests rapid diversification following the extinction,” said Madeleine Atteberry, lead author of the study.

A big focus of the study, underscoring the diversity finds, were lower jawbones and teeth.

All three creatures belong to the Periptychidae family, which are distinguished from other condylarths by their teeth.

Beornus honeyi, the largest of the three, is named for J.R.R. Tolkien’s character Beorn in “The Hobbitt.” He could take on the form of a fierce bear to defeat invading orcs. The newly discovered mammal’s name is due to its inflated, puffy molars.

Though it resembles other species of Conacodon, Conacodon hettingeri is distinguished by a difference in its last molar. Miniconus jeanninae is similar in size to other small condylarths of the early Paleocene, except for a tiny cusp on its molars called a parastylid.

Atteberry and co-author Jaelyn Eberle examined the lower jaws and teeth of 29 fossil condylarth species to determine their anatomical differences and how they related to each other and other condylarths of the early Paleocene period in the U.S.

“These new periptychid condylarths make up just a small percentage of the more than 420 mammalian fossils uncovered at this site,” Atteberry said. “We haven’t yet fully captured the extent of mammalian diversity in the earliest Paleocene and predict that several more new species will be described.”

All three species exhibit swollen premolars and unusual vertical enamel ridges. Researchers theorize their teeth evolved to grind plants and meat, suggesting they could be omnivores.

“When the dinosaurs went extinct, access to different foods and environments enabled mammals to flourish and diversify rapidly in their tooth anatomy and evolve larger body size,” Atteberry said. “They clearly took advantage of this opportunity, as we can see from the radiation of new mammal species that took place in a relatively short amount of time following the mass extinction.”