By improving resolution, the model allows scientists to follow the gas in flux across the galaxy in much greater detail.
By Martin M Barillas August 18, 2021
Facebook
Twitter
Linkedin
Email 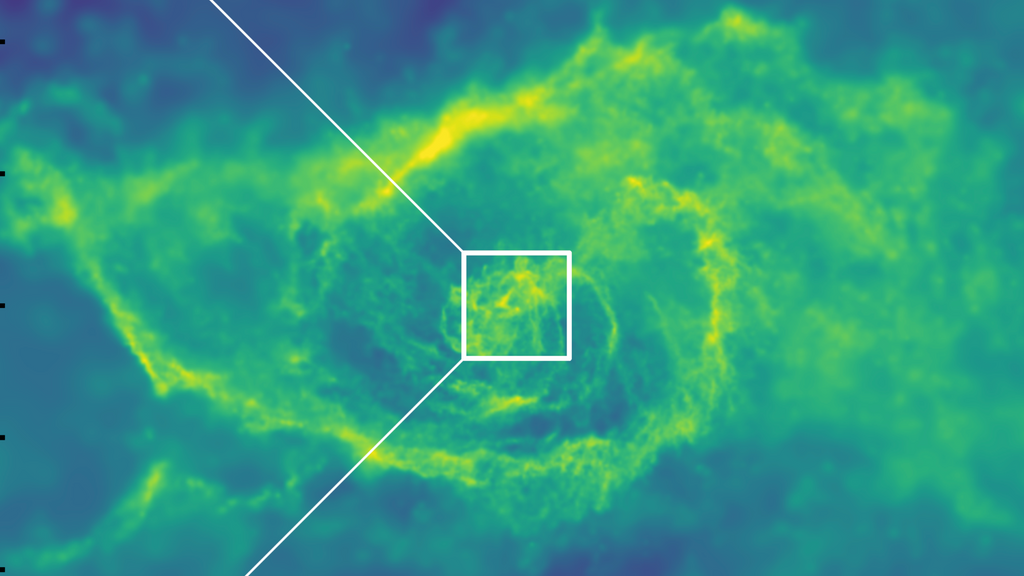 A still image from the simulation, showing the nuclear region of a massive galaxy. The square marks the galaxy's center, which is home to its central supermassive black hole. (Anglés-Alcázar et al. 2021, ApJ, 917, 53.)

A new computer simulation is powerful enough to show how black holes grow — at a resolution 1,000 times higher than previously thought possible.

“It turns out, it is very important to connect all these processes at the same time,” he said.

The new tool, from researchers at Northwestern University, accounts for the many factors that affect the growth of black holes. It details how gas flows across the universe, before being scooped up by a galaxy’s spiral arms, which are made of young stars, to feed the supermassive black hole at its center.

Anglés-Alcázar said major events like a supernova — the massive explosion at the end of a star’s life — releases a lot of energy and influences the evolution of a galaxy.

“So we need to incorporate all of these details and physical processes to capture an accurate picture,” he said.

Researchers developed their model to include various factors, such as the expansion of the universe, feedback from massive stars, and gravity gas hydrodynamics to get a better picture of the galactic environment around a black hole.

Following the work of the Feedback In Realistic Environments (FIRE) project, the new simulation improves model resolution, allowing it to follow the gas in flux across the galaxy in much greater detail.

“Until now, theorists developed explanations relying on patching together different ideas for how matter in galaxies gets crammed into the innermost one millionth of a galaxy’s size,” he said.

“The light we observe from distant quasars is powered as gas falls into supermassive black holes and gets heated up in the process,” said Faucher-Giguère.

“Our simulations show that galaxy structures, such as spiral arms, use gravitational forces to ‘put the brakes on’ gas that would otherwise orbit galaxy centers forever,” he said. “This braking mechanism enables the gas to instead fall into black holes and the gravitational brakes, or torques, are strong enough to explain the quasars that we observe.”

Next, the authors want to study large statistical populations of galaxies and their central black holes to understand how they form and grow.