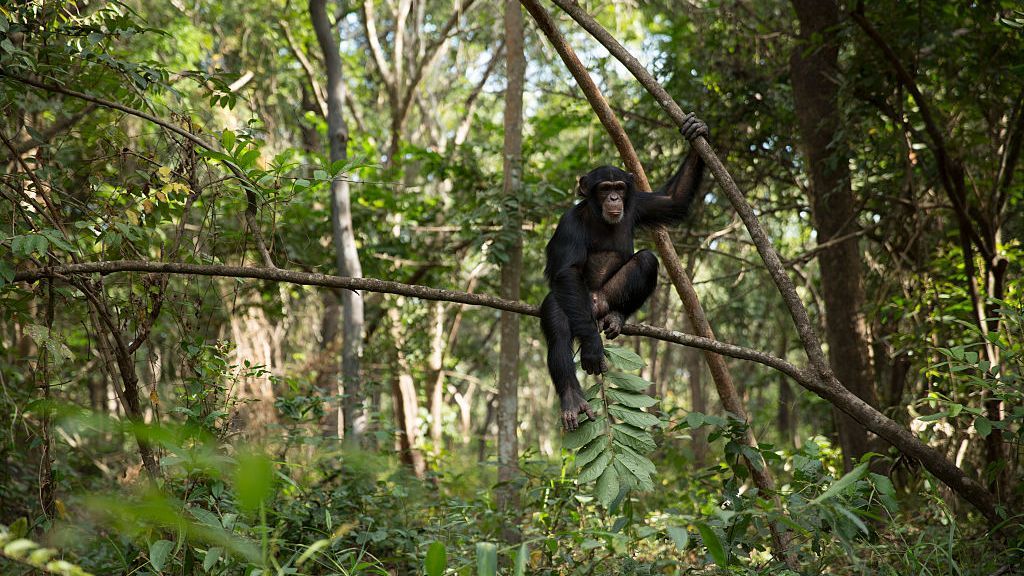 Male chimps who form strong relationships with other males have greater reproductive success, according to a new study, which may help explain friendships and cooperation among humans, too. Pictured, Sam sits in a tree during one of his daily bushwalks at the Chimpanzee Conservation Centre on November 30, 2015 in Somoria, Guinea. (Dan Kitwood/Getty Images)

Male chimpanzees that form close relationships with the boss, or other males, are more successful when choosing mates, new research shows.

To find out why making friends is important at mating time, researchers at the University of Michigan joined others to study the link between male social relations and mating success by looking at behavioral and genetic data from chimpanzees living in western Tanzania.

The researchers examined a group of chimps that are part of the long-running study begun by the renowned Jane Goodall at Gombe Stream National Park in 1960.

They found that males who build strong bonds with the alpha male or a larger network of other males in the group show better results in siring baby chimps.

Study co-author Ian Gilby, an associate professor in the School of Human Evolution and Social Change at Arizona State University, said chimps are the primates closest to human beings, and that the study serves to “help us to identify which features of human social life are unique.”

Gilby said the research suggests “strong bonds among males have deep evolutionary roots and provided the foundation for the more complex relationships that we see in humans.”

“One big question that biologists have had for a long time is why you see so many friendly behaviors such as cooperation and alliance in animals,” said lead author Joseph Feldblum, assistant anthropology professor at the University of Michigan.

“One would expect to see these social bonds — or strong, friendly social relationships — only if they provide some sort of fitness benefit to the individuals,” Feldblum said. “Males wouldn’t spend all this time grooming other males and forgoing trying to find females or food unless you get some kind of benefit from it.”

No previous studies have looked at the link between social relationships and reproductive success in chimpanzees. Female primates, which are focused on getting what they need to reproduce, have been heavily studied. Feldblum contends that the biggest task for males is gaining reproductive access to females.

“Chimps cooperate frequently, and often in these very dramatic ways: You see things like grooming, all kinds of complex alliance formation and group territorial defense,” Feldblum said. “The question is: What do males get out of it and how?” The answer is: more offspring.

To find the link between reproductive success and sociality researches looked at genetic and behavioral data collected about the chimpanzees.

After developing a model to account for male age, dominance rank and genetic relation to the mother, they looked at 56 siring events between 1980 and 2014 with known paternity. Next, they added measures of male social bonds to the model, to see if they would help predict which male sired a given offspring.

They found that males with the highest number of social bonds with other males were more likely to reproduce. Indeed, having two additional strong association ties with other males improved the likelihood of siring a given offspring by 50 percent.

To determine the effect of having a relationship with the alpha male, researchers looked at 45 siring events by non-alpha males. They compared the previous model to models that also measured bond strength to the alpha male.

The most predictive model was the “composite sociality index,” which includes measures of grooming and chumminess with the alpha.

They found that subordinate males with strong bonds with the alpha, as well as subordinates with many strong association ties, were more likely to produce a given offspring.

“Sucking up to the boss is nothing new,” said co-author Anne Pusey, Distinguished Professor Emerita of Evolutionary Anthropology from Duke University. “We show that it’s always paid off.”

But sucking up to the boss is not the only way to court females in chimp world. Researchers found that males that form strong association ties are more likely to form coalitions and thus gain opportunities to mate and advancement in rank position.

The authors say the study, published in the journal iScience, may offer clues to how friendships sprung up among early humans. But Feldblum says there’s still more to learn.

“Is it that if your ally is nearby, you’re more likely to mate with an estrus female, or does having your allies around you protect you from harassment from other males? Or because your ally will support you if a conflict erupts, your stress levels are lower, and you can devote more energy to mating efforts? This last step we still don’t know,” he said.