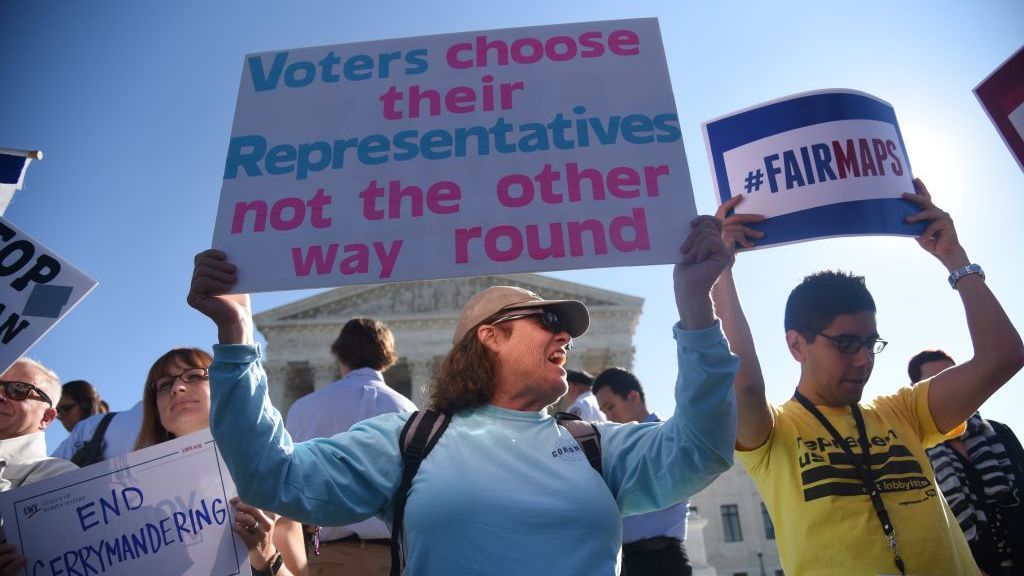 Demonstrators gather outside of the U.S. Supreme Court in Washington, D.C., to to call for an end to partisan gerrymandering in Oct. 2017. (Olivier Douliery/Getty Images)

New 2020 U.S. Census data has laid the groundwork for highly politicized skirmishes across the country that will influence political developments for a decade.

The redistricting of U.S. House of Representatives electoral boundaries to account for changed state populations — unveiled by the Census data last week — is already underway. About half of the 50 states will set new district boundaries by the end of this year, with some finalizing maps by next month. The remainder will follow suit by early 2022.

The redrawing of districts is raising concerns about gerrymandering, the practice of a party drawing distorted boundaries to artificially maximize their electoral representation from a given vote.

“We expect a festival of gerrymandering this year, and unless people speak out, it could be the worst cycle we’ve ever seen,” Corey Goldstone, senior communications manager at the nonpartisan Campaign Legal Center, which aims to “advance democracy through law,” told Zenger. “People living in states with one party control of state houses are at high risk of gerrymandering. Politicians in those states will try to maximize partisan advantage to cling to power, regardless of the will of the people.”

States slated to gain one additional House seat after the reapportionment are Montana, Oregon, Colorado, North Carolina and Florida. Texas, on the other hand, will pick up two more seats in the House. Meanwhile, Michigan, Ohio, Pennsylvania, New York, California, Illinois and West Virginia will all lose one seat.

While states have a variety of methods to create new maps, half leave the responsibility to their legislatures, with most subject to the governor’s approval. This means the potential for gerrymandering is strongest in those states where one party controls all branches of government, said Kathay Feng, national redistricting director at Washington, D.C.-based watchdog Common Cause.

“States where there is tripartite control by one party always raises concerns because it means that the legislature there can push through maps, potentially get the support of a governor of the same party and draw lines that unfairly decimate the minority party,” Feng said.

The major parties each have their own infrastructure to help with the process.

The National Republican Redistricting Trust will help GOP legislatures draft their new maps and defend them against court challenges, while the National Democratic Redistricting Committee, founded by former Attorney General Eric Holder, will help the Democrats.

But it’s the GOP that could have the most advantage this time around, said David Daley, senior fellow at FairVote, a nonpartisan advocate for election reform, and author of two books on gerrymandering and election reform.

“Republicans have more opportunities on this current map to pick up seats than Democrats do,” Daley told Zenger. “On the Republican side, you’re going to see a lot of energy focused on Florida, North Carolina, Georgia and Texas. There are probably at least 10-12 seats that Republicans could pick up there through rewiring districts alone.”

The Democrats, meanwhile, will be looking for advantages in New York and Illinois.

“Those are the two states where they probably could make the most gains with a tilted map of their own,” Daley said.  And then the other state would be Maryland, where they could try to shoot the moon and move the 7-1 map into an 8-0 map.”

Thirteen states determine their congressional redistricting through independent or bipartisan commissions, and a few others have independent bodies that propose redistricting plans while saving the role of approving them for the state legislature.

But these precautions have not always been so successful, said Feng.

“New York has at the state level an advisory redistricting commission, and New York also has in the past had its maps ultimately thrown to the court,” she said. “The biggest or most interesting challenge there is that the advisory commission has had a history of having the legislature essentially step in and draw the lines that they really wanted.”

Problems could also arise in Ohio, a “purple” state where the GOP controls the legislature and governor’s office. The state voted in 2015 to establish an independent redistricting commission, but some “disturbing signs” have emerged, Feng said.

“They had a single hearing. That hearing was for nine minutes, which does not bode well for transparency and public inclusion. And they’re only just now starting to talk about what they’re planning on doing, and our concern is that it will be for show while partisan operatives manipulate the lines the way they really want to behind closed doors.”

Fighting back against gerrymandering may also be a challenge after the U.S. Supreme Court ruled in 2019 that questions of partisan gerrymandering could not be adjudicated in federal courts. The ruling leaves just a few avenues open for contesting new maps.

“Without that threat, lawmakers are really going to have a green light to go ahead and draw some wild lines,” Daley of FairVote said. “But state courts remain open, and they have been a winning path for voters who have challenged maps.”

Gerrymandering lawsuits in state supreme courts have led to some success, such as orders for new maps to be drawn in Pennsylvania in 2018 and North Carolina in 2019 after their state legislatures were ruled to have drawn lines to maximize the governing party’s power.

However, concerns persist that state courts may not always serve as effective checks. In Florida, for instance, Republican Gov. Ron DeSantis has made a slew of appointments to the state’s supreme court since taking office in 2019, creating worries for some observers.

“Florida has had a long history of incumbents manipulating lines,” Feng said.

Ultimately, Daley added, it is voters who lose when it comes to gerrymandering.

“We often talk about this in sort of partisan advantage, but it’s the voters who kind of keep getting short-shrifted in these maps,” Daley said.

“If Democrats draw an 8-0 map in Maryland, that’s every Republican in the state effectively having no voice, and if Republicans do the same thing … and draw unrepresentative maps in the states where they can do so, that too tilts our politics in dangerous ways.”

With the electoral boundaries to be set in stone until after the next U.S. Census in 2030, there’s a lot at stake for communities that are divided between different electoral districts so that one party stands a better chance of winning, said Goldstone. A community’s ability to lobby representatives dictates its ability to ensure that fundamental services — such as schools, hospitals and fire departments — are available and receive funding, he said.

“Voting districts drawn this year will shape our lives and our communities for the next decade,” Goldstone, of the Campaign Legal Center, said, calling on lawmakers to eschew the practice.

“Communities should expect transparency and accountability from the map drawing process.”