A second Bharatiya Janata Party leader was killed in the third such attack in a week.
By Zenger News Desk August 18, 2021
Facebook
Twitter
Linkedin
Email 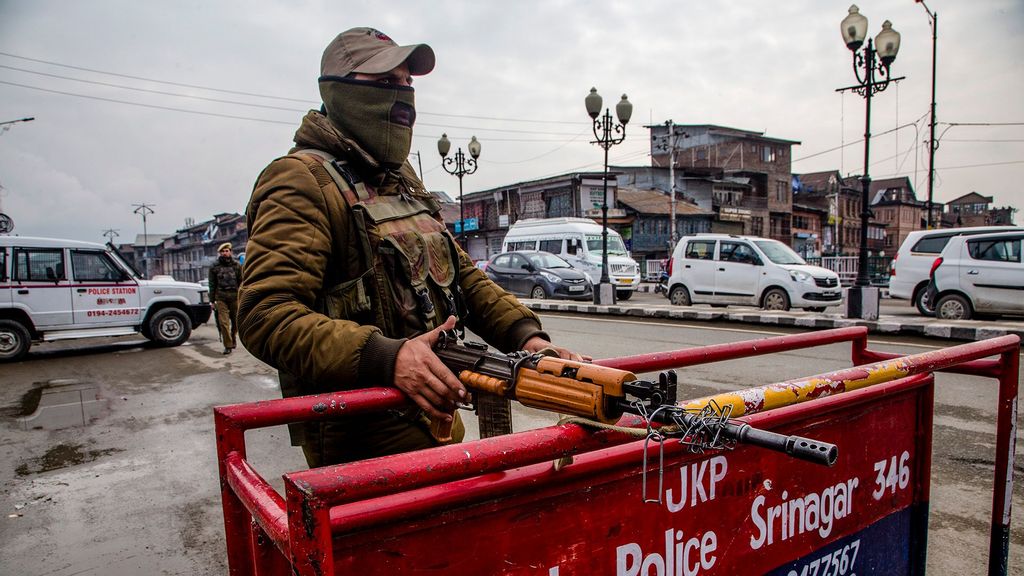 A policeman stands guard on a checkpoint in the middle of the main road, in Srinagar, Kashmir, India. (Yawar Nazir/Getty Images)

SRINAGAR, — A second Bhartiya Janata Party leader was shot dead on Aug. 17 in the Kulgam district of India’s far-north union territory of Jammu and Kashmir, a week after a functionary was killed by unidentified gunmen in a district northeast of Kulgam.

Bhartiya Janata Party is the ruling party in India.

The incident is the latest in a series of attacks targeting leaders from the Bhartiya Janata Party, the single biggest political party and second after the incumbent People’s Alliance for Gupkar Declaration in terms of electoral constituencies.

Javed Ahmad Dar, who was in charge of the Homshali Bugh constituency in Kulgam, was killed in what has been labeled a terrorist attack. He was the 21st party activist to be killed in the past two years, nine of whom were reported in the Kulgam district alone over the last year, as per the Bhartiya Janata Party.

“A shameful and cowardly act by terrorists. My deepest condolences to them, and prayed for courage to the bereaved family to bear the irreparable loss.”

The Jammu and Kashmir Bhartiya Janata Party condemned the attack in a tweet.

Omar Abdullah, former Chief Minister of Jammu and Kashmir, too, denounced the attack.

“Terrible news from Kulgam,” Abdullah tweeted. “Javed Ahmad was gunned down in cold blood. I unreservedly condemn this terror attack and send my heartfelt condolences to Javved’s family and colleagues. May Allah grant him a place in Jannat.”

Earlier, on Aug. 17, unidentified shooters had fired upon a civilian at Brazloo-jagir in the Kulgam district. He had been shifted to a nearby hospital.

More details are awaited in this matter.

Meanwhile, the Bhartiya Janata Party unit in Jammu and Kashmir visited the house of Mandal President Jasbir Singh, whose house was attacked by terrorists. Several members of the family were injured, and a four-year-old child was killed.

Singh’s family was attacked just four days after a district head of the Bhartiya Janata Party, Kisan Morcha, and his wife were shot and killed by unidentified gunmen in Jammu and Kashmir’s Anantnag on Aug. 9.

The central government had in 2019 revoked the special constitutional status of Jammu and Kashmir under Article 370 of the Indian Constitution that granted administrative autonomy to the erstwhile state and special protection to its citizens.

«Previous Post
If I Can, Why Not You: World No.3 Para-Badminton Player Inspires Indian Youth»Next Post
India Announces Duty Rebate Rates To Boost Exports