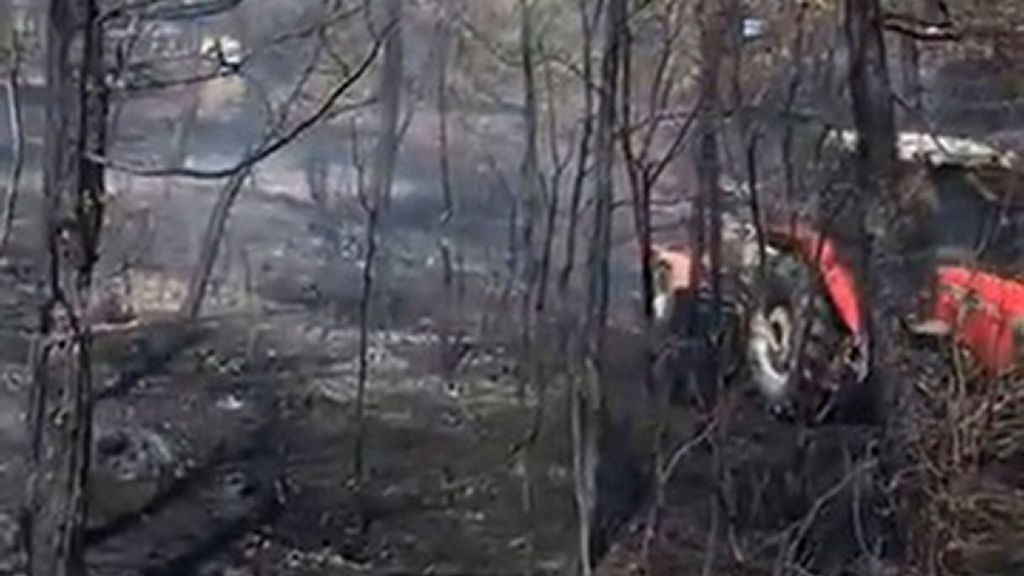 A man filming firefighting efforts in Denizli, Turkey, is drenched by water from a helicopter on Aug. 14. (@Mguzel20/Zenger

A man is drenched by a firefighting helicopter as it tries to extinguish a forest fire in Turkey, which as been ravaged by hundreds of wildfires since late July.

Mehmet Guzel, a Pamukkale University staff member, went to the fire in the Kurtluca neighborhood of Denizli on Aug. 14, along with other villagers. While waiting for the authorities, they filled their tractor-trailers with water and rushed to the forest to try to put out the flames.

Guzel was broadcasting live on Facebook when he heard the incoming chopper. He turned his camera skyward, where he saw the fire-extinguishing helicopter directly overhead.

The helicopter released its wall of water, and Guzel captured the moment he is engulfed and turned the camera on himself to show he was soaked.

He finds humor in his situation:

“He’s throwing it on me right now!”

“The helicopter dumped it on us, and we’re all wet.”

Guzel posted that the fire was quickly extinguished, though efforts to keep the area damp will continue.

The 299 forest fires in Turkey, raging since July 28, had been brought under control as of Aug. 12, according to a tweet by Minister of Agriculture and Forestry Bekir Pakdemirli.

Floods have also damaged vast areas in Turkey in recent days, and on Monday, the agriculture minister was addressing that disaster as well.

“We are in Bartin, which was affected by the flood disaster,” he tweeted. “We met with our citizens in Akron village and listened to their demands. Hopefully we will complete the work quickly … .”

An average of 51,299 acres of land are burned every year in Turkey, and this amount has increased by 755 percent in the last eight months, according to the European Forest Fire Information System. Between January and August, nearly 439,000 acres of forest are reported to have burned.

In addition, 15 million tons of carbon dioxide (CO2) emissions were released by forest fires in Turkey this summer, according to the calculations of Nic Surawski, an environmental engineer, and a senior lecturer at Sydney University of Technology.

The amount of CO2 released by the fires has essentially canceled the reduction in CO2 emissions that TURKSTAT reported in March.

«Previous Post
Olding Back The Tears: Heartbreak As Europe’s Oldest Chimp Dies»Next Post
Gas Prices Remain High, But Relief At The Pump Could Be Right Around The Corner