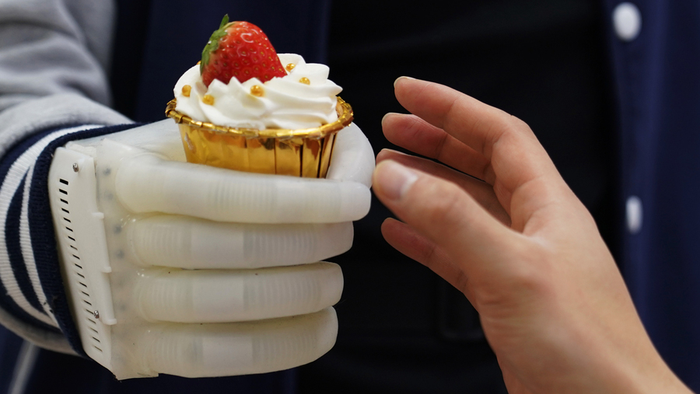 A new inflatable robotic hand is lighter and more flexible than its metal predecessors. (Xuanhe Zhao, Massachusetts Institute of Technology)

A new inflatable “smart” hand has been developed that’s available for a fraction of the cost and with better results than the motorized bionic prosthetics that currently dominate the market.

More than 5 million people worldwide who have undergone upper-limb amputation have long had to contend with bulky, mannequin-like artificial appendages. Highly articulated bionic limbs — neuroprosthetics — that sense amputees’ residual muscle signals and robotically mimic their intended motions are also available. Such appendages are costly, however, and their metal skeletons and electric motors are heavy and rigid.

To address those shortcomings, engineers at Massachusetts Institute of Technology and Shanghai Jiao Tong University in China designed an inflatable, soft, lightweight, and low-cost neuroprosthetic hand. In a study that appeared this week in Nature Biomedical Engineering, amputees using the inflatable robotic hand performed daily activities, such as pouring a carton of juice and petting a cat, in some cases better than those with rigid neuroprosthetics.

The new neuroprosthetic is a fraction of the cost of a rigid smart limb — using about $500 worth of materials and weighing around half a pound. It has a system for tactile feedback, which researchers found restored some primitive sensation in a volunteer’s residual limb. Surprisingly durable, the inflatable robotic hand quickly recovered after being struck with a hammer or run over by a car.

Two volunteers with upper-limb amputations were outfitted with the neuroprosthetic, learning to use it by repeatedly contracting the muscles in their arm while imagining making five common grasps. Following 15 minutes of training, the volunteers performed standardized tests to demonstrate manual strength and dexterity.

They turned pages, wrote with a pen, lifted heavy balls, stacked checkers, and picked up fragile objects. The volunteers also performed the tasks with a rigid, commercial bionic hand, finding that the inflatable hand was as good or better than its rigid counterpart.

A volunteer used the inflatable prosthetic to shake a person’s hand, pet a cat, and touch a flower, intuitively using it for daily activities, such as eating and handling object and tools such as laptops, food and hammers. The researchers also observed that a blindfolded volunteer could discern which of the prosthetic fingers poked and brushed an item. Additionally, he could “feel” bottles of different sizes that were placed in the prosthetic hand, lifting them in response.

The researchers believe that amputees can regain a form of sensation and real-time control with the inflatable hand. MIT has applied for patent on the prosthetic.

“This is not a product yet, but the performance is already similar or superior to existing neuroprosthetics, which we’re excited about,” said study co-author Xuanhe Zhao of MIT, whose co-authors on the paper are Shaoting Lin, Guoying Gu, Xiangyang Zhu, and collaborators at Shanghai Jiao Tong University.

“There’s huge potential to make this soft prosthetic very low cost, for low-income families who have suffered from amputation,” he said.

Made from EcoFlex, a soft, pliant elastomer, the prosthetic’s five balloon-like fingers feature embedded fibers resembling articulated bones in human fingers. These are connected to a 3-D-printed “palm” in the form of a human hand. In place of the electric motors used in other neuroprosthetics, it uses a simple pneumatic system to inflate fingers and bend them in specific positions. Paired with a pump and valves worn at the waist, the system offers a significant weight reduction.

Using a computer model they developed, researchers could relate a finger’s desired position to the corresponding pressure a pump would have to apply to achieve that position. A controller inflates the fingers to mimic common grasps, such as a fist, a cupped palm, and pinching two and three fingers together.

With signals from electromyography (EMG) sensors fitted at the prosthetic’s opening, where it is attached to the user’s limb, electrical impulses generated by human motor neurons to control muscles are measured. The sensors pick up signals from the residual limb, for example, when an amputee imagines making a fist.

Muscle signals are then decoded and related by the researchers to common grasp types, using an algorithm to program the controller for the pneumatic system. For example, when an amputee imagines holding a wine glass, the sensors pick up the residual muscle signals and the controller translates them into corresponding pressures. The pump then applies those pressures to inflate each finger and produce the amputee’s intended grasp.

The researchers also sought to enable tactile feedback — which is not found in most commercial neuroprosthetics — by stitching a pressure sensor on each prosthetic fingertip. When touched or squeezed, it produces an electrical signal proportional to the sensed pressure. Each sensor is wired to a specific location on an amputee’s residual limb, so the user can “feel” when the prosthetic’s thumb is pressed, for example, versus the forefinger.

“We now have four grasp types. There can be more,” Zhao said. “This design can be improved, with better decoding technology, higher-density myoelectric arrays, and a more compact pump that could be worn on the wrist. We also want to customize the design for mass production, so we can translate soft robotic technology to benefit society.”