International students inoculated with non-FDA or non-WHO-approved vaccines may need to get another jab.
By Xinran Wang and Stella Lorence August 17, 2021
Facebook
Twitter
Linkedin
Email 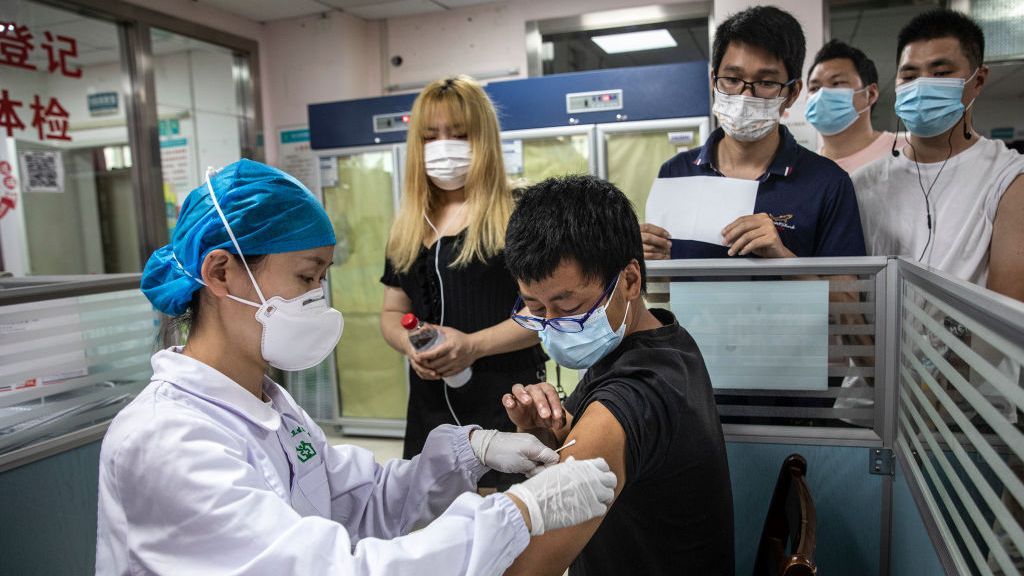 A medical worker administers a dose of COVID-19 vaccine to a resident in Wuhan, China, on June 21. American colleges and universities are weighing whether international students will need to get new jabs if they received vaccines not approved by the U.S. Food and Drug Administration or the World Health Organization. (Getty Images)

More than 500 colleges and universities in the United States will require students to get a COVID-19 vaccine before attending the fall semester, but a patchwork of rules about which vaccines satisfy the mandate is creating uncertainty for international students.

Most universities will require students to get new jabs if they received vaccines not approved by the U.S. Food and Drug Administration or the World Health Organization. Among the vaccines in this category are Russia’s Sputnik V and EpiVacCorona, India’s COVAXIN, China’s Ad5-nCoV and ZF2001, Cuba’s Soberana 02 and Abdala, and Kazakhstan’s QazCovid.

Yamin said there is no clear framework in place to evaluate the efficacy of various COVID-19 vaccines, and that leaving the decision up to individual institutions is producing “enormous inequities.”

“They need to be able to use governmental and intergovernmental institutions’ approvals as proxies for making their own protocols and policies,” Yamin said.

A database from The Chronicle of Higher Education shows that hundreds of campuses will require students or employees to be vaccinated.

Some colleges, including Boston University, the University of Washington and the California State University system, will accept students who have received any vaccine.

Among the schools accepting only FDA/WHO-approved vaccines — those produced by Pfizer-BioNTech, Moderna, Johnson & Johnson, AstraZeneca and Sinopharm — are Georgetown University, University of Chicago and New York University.

“Requiring vaccinations is consistent with our intent to minimize the spread of COVID-19 within our own community, and more generally in New York City, and to enable more in-person on-campus activities,” New York University Provost Katherine Fleming said in an April statement.

Under NYU’s requirements, students who received other vaccines also need to quarantine.

“All students who are not fully vaccinated and spend 24 hours or more in a country with a CDC Level 4 Travel notice in the 10 days immediately prior to arriving at NYU will be required to quarantine,” the statement says.

“It makes sense politically,” said Zoe Chen, a New York University student from Beijing, “but individually, I’ll feel like ‘why don’t you just admit my vaccine? You are creating more trouble for me.’”

Chen said she has concerns about the safety of repeated COVID-19 inoculations.

“I will have some health concerns because I’m not sure if you can get re-vaccinated in a short period of time,” she said.

Few studies have been done on the safety of mixing vaccine brands.

Early findings from a UK study suggest that it’s safe and effective to mix a viral vector vaccine such as the Johnson & Johnson or AstraZeneca shot with an mRNA vaccine like that produced by Pfizer. Both vaccines used in the study were approved by the WHO, and the study’s subjects were all older than 50.

The Centers for Disease Control and Prevention states that “people are not recommended to receive more than one complete COVID-19 vaccination series,” but its guidance for people vaccinated outside the U.S. with a non-FDA- or non-WHO-approved brand recommends they get vaccinated again.

“You always have to look at any of these vaccines from the perspective of the safety of receiving the vaccine itself and then, will it work,” said Jessica Justman, an associate professor of medicine in epidemiology at the Columbia University Mailman School of Public Health.

Though there are few studies currently available using non-WHO-approved vaccines, the “logic makes sense,” Justman said, since other kinds of vaccines have been shown to be safe together.

“I’d accept getting re-vaccinated,” said Jing Tan, an international student at Stony Brook University in New York state. Jing was vaccinated with the Sinopharm vaccine, the Chinese-made variant approved by the WHO but not the FDA. “There must be some quality problem if a vaccine is not approved by the FDA.”

China has given out the largest number of shots in the world, with just under 1.8 billion doses and six vaccine types as of Aug. 16, according to WHO data. Of those six vaccines, only three have been approved by the WHO.

India has distributed the second-highest number of vaccines — 519 million — with only one of the three types approved by the WHO.

Justman said the United States has a bigger problems than whether the vaccines received by returning international students are as effective as those from Pfizer and Moderna.

“Really, all the authorized vaccines have very, very high rates of efficacy when it comes to preventing severe disease, hospitalization and death,” Justman said.

“The ‘booster’ that the U.S. needs right now is for everyone to get vaccinated.”

About 1.1 million international students were enrolled in U.S. institutions of higher education in academic year 2019-20, according to the Migration Policy Institute.