One of the most vulnerable groups faces social and physical challenges.
By Julio Guzmán August 17, 2021
Facebook
Twitter
Linkedin
Email 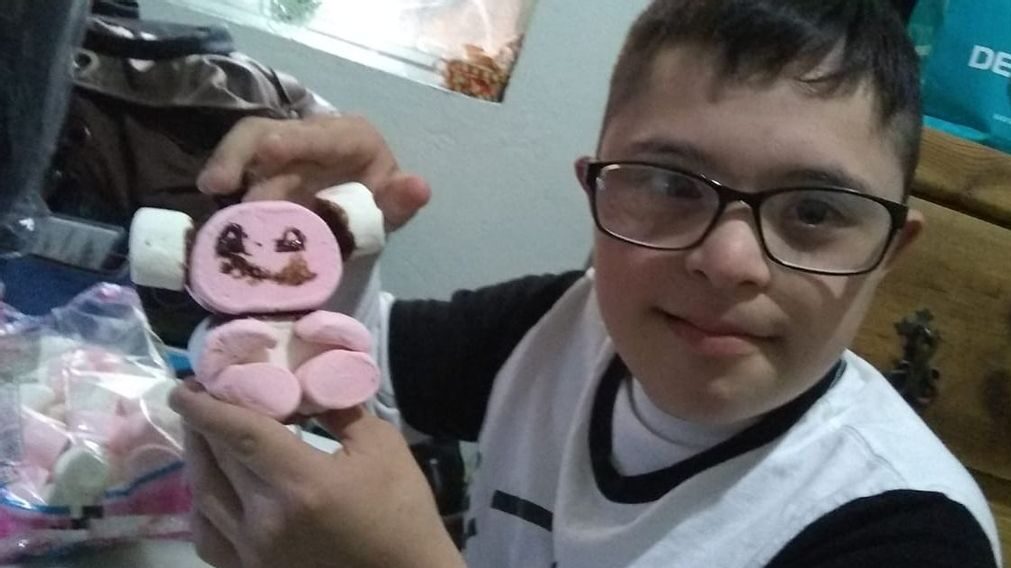 Isolation during the pandemic has led many students with disabilities to experience socialization problems. (Courtesy of Remedios Ortega)

The quick shift to remote education at the beginning of the COVID-19 pandemic was a challenge for parents and students worldwide. But families of students with disabilities have had a tougher time.

Lack of socialization may impact these students’ physical and emotional health, and parents may not know how to provide the support their children need. In addition, some of them may be at a higher risk of having complications if they get infected with COVID-19. The overall result may be a massive increase in school dropouts or huge lags in their education.

Pavel Linares Ortega is currently an eighth-grade student. He likes to run and exercise and has secured several athletic medals for his school. He also enjoys watching cartoons.

Pavel has Down syndrome and hearing impairment. He is 14, but his behavior resembles that of a 10-year-old boy. He has communication problems and cannot read or write. Like many other students, Pavel had to shift to remote education when the pandemic began.

“Pavel got very excited when online classes began because he was able to see his classmates,” said Remedios Ortega, his mother. She explained that throughout the pandemic, Pavel refused to go out and did not exercise. “All he did was be in class, watch television or be entertained with something else. He did not go jogging, swimming or do pull-ups.”

After such a dramatic change in his social life, Pavel became shier. Socializing or even wanting to leave the house has become more challenging for him. Neighbors his age do not invite him to play. “I don’t know if they think that he is not going to understand them, but that’s not the case,” said Ortega.

“Lack of socialization affects the children’s learning ability and functionality. It slows them down and worsens their mood,” said Julia Beatriz Barrón Martínez, a doctor in psychology and postdoctoral research professor at the Zaragoza School of Higher Education (FES), which is part of Mexico’s National Autonomous University.

“Many may suffer from anxiety, depression, catatonia, or may not want to move due to their slowed metabolism. They may suffer from obesity or hypertension, and when it comes to COVID-19, they are an at-risk group.”

Now that Pavel takes online classes, Ortega has had to adjust her life, which has not been easy. She works and must spend extra time monitoring her son’s lessons and helping him with his homework, in addition to taking care of another daughter.

Although Ortega has the support of her husband, it has not been enough. She would like her son to return to school as soon as possible, but there is a risk: Pavel has not been vaccinated yet.

Students with disabilities in Mexico
Sixteen out of every hundred people in Mexico live with some limitation to their sight, hearing, speaking or communication, according to the country’s 2020 Population and Housing Census. Disabilities can be intellectual or physical. Down syndrome, Angelman syndrome, Prader-Willi syndrome and autism are considered intellectual disabilities. Physical disabilities limit a person’s capacities or mobility, preventing them from performing certain activities.

Mexico’s Ministry of Public Education has created programs for students with disabilities or who require special education.

The Ministry’s program serves gifted students, too, as they have special educational needs as well. The number of gifted students enrolled in school in that same period was 20,690.

Before the pandemic, the Ministry served these students through the 1,669 Multiple Attention Centers, specializing in students with severe disabilities, and the 4,646 Regular Education Support Service Units (USAER) for students with special educational needs. However, everything changed with the lockdown.

“If it was hard for us before, [once the pandemic began] it became twice as hard,” said Elba Ríos Pérez, a support teacher at USAER’s Unit 8. “It has been a huge challenge to work with the students remotely because not all of them can do the work that suits their needs,” she said.

Ríos Pérez works with 17 students with different types of needs — four with intellectual disabilities, one with autistism spectrum disorder, four gifted students and the others with severe learning difficulties and Attention-Deficit / Hyperactivity Disorder.

She believes that not all parents are prepared to give their children what they need, “not because they don’t want to, but because the families’ economic or cultural conditions are often a barrier,” she said.

The Ministry of Education launched the “Aprende en casa” remote education program during the pandemic. It broadcasts educational content but has had its flaws. There are no televisions in rural areas or regions below the poverty level, and the program has standardized content, which means they have not been adjusted for students with challenges, including those with disabilities.

“There are people who cannot see or hear. They cannot use these resources because they would need a translation tool. … Some classes provide sign language interpretation, but sometimes that is not enough. Students who are just beginning elementary school or preschool are still consolidating their sign language, and it’s a limitation,” said Dr. Socorro Asalia Juárez Bravo, supervisor of USAER’s zone 09. Dr. Juárez Bravo overviews USAER units in five municipalities in the state of Puebla.

With all these challenges and the lag that students with disabilities already had, educational authorities fear dropouts.

“Many families downplayed the importance of school. The connection between the family and the school failed. Parents downplay the importance of this connection and [some] decided that their children stop attending. It is very disturbing,” said Juárez Bravo, explaining that it would take political will to create programs that help students with disabilities get caught up with what they have lost through the pandemic.

The 2021–2022 school year will begin on Aug. 30, 2021. Some states, especially those with a green epidemiological traffic light indicating lower rates of COVID, will resume in-person classes. The choice between remote or in-person education will depend on the infection rate in each region. In Puebla, students with Down syndrome will return to classes in January due to their increased risk in case of infection.

Meanwhile, Barrón Martínez recommends that parents of children with disabilities provide them with an environment that does not deprive them of socialization. “As they are able to establish communication, they learn to overcome challenges every time they face them. Socialization allows the children to learn, be functional, and understand social rules,” she said.