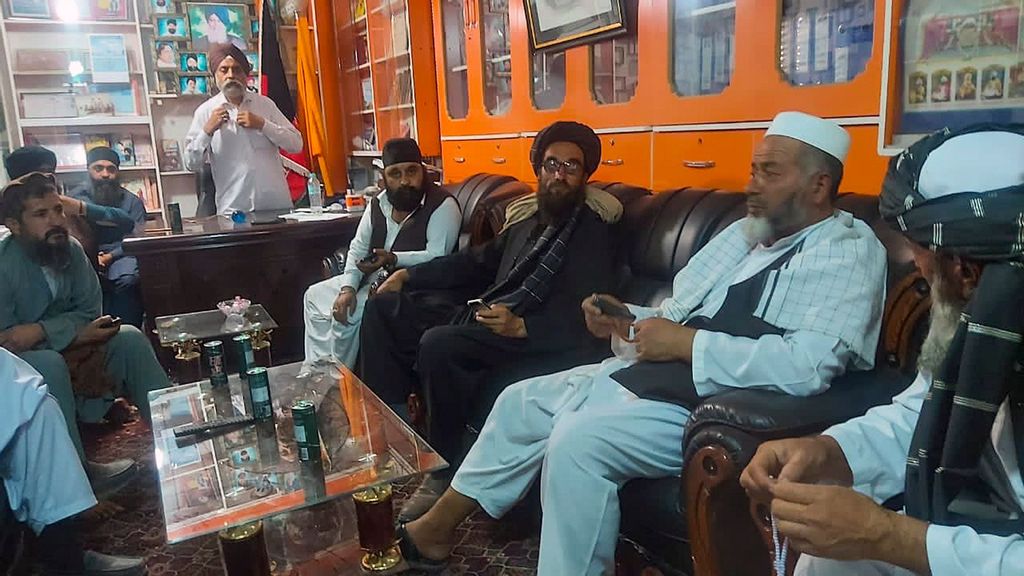 NEW DELHI — The people from Sikh and Hindu communities have taken refuge at the Karte Parwan Gurdwara in the Afghan capital of Kabul amid a deteriorating security situation in Afghanistan after the fall of the capital to the Taliban, said Manjinder Singh Sirsa, chief of the Delhi Sikh Gurudwara Management Committee.

He said that the Taliban leaders have met the Gurdwara Committee of Kabul and Sangat president and assured them of safety.

“Taliban Leaders have met them and assured them of their safety,” tweeted Sirsa.

“We are hopeful that Hindus & Sikhs would be able to live a safe/secure life despite political & military changes happening in Afghanistan.”

“My request from @DrSJaishankar ji is that efforts should be made to bring back to India Hindu Sikh people taking shelter in Gurdwara Karte Parwan Sahib and staying in hotels near Embassy,” said Sirsa in another tweet.

“I am in constant touch with President, Gurdwara Committee of Kabul and Sangat who have told me that more than 320 people of minorities living in Ghazni and Jalalabad (including 50 Hindus and more than 270 Sikhs) have taken refuge in Karte Parwan Gurdwara in Kabul in the wake of recent developments,” said Sirsa.

Ministry of External Affairs and others responsible for it will make all the arrangements, said Hardeep Singh Puri, India’s Union Minister of Housing & Urban Affairs & Minister for Petroleum and Natural Gas.

I am in constant touch with President, Gurdwara Committee of Kabul & Sangat who have told me that 320+ people of minorities living in Ghazni & Jalalabad (including 50 Hindus and 270+ Sikhs) have taken refuge in Karte Parwan Gurdwara in Kabul in wake of recent developments @ANi pic.twitter.com/WW2XZqPwG6

Meanwhile, the Ministry of External Affairs said that the Indian government closely monitored all developments in Afghanistan and was in touch with Indian nationals who wish to return.

“We are in constant touch with the Sikh and Hindu community leaders in Kabul. Their welfare will get our priority attention. @capt_amarinder @HardeepSPuri,” said Subrahmanyam Jaisankar, India’s Minister for External Affairs, in a tweet.

Ministry of External Affairs spokesperson Arindam Bagchi said the situation in Afghanistan is being monitored “constantly at high levels,” and the government will take “all steps to ensure the safety and security of Indian nationals and our interests in Afghanistan.”

Bagchi said they are in constant touch with the representatives of Afghan Sikh and Hindu communities and will facilitate repatriation to India of those who wish to leave Afghanistan.

He said several Afghans had been India’s partners, and “we will stand by them.”

“We have been issuing periodic advisories for the safety and security of Indian nationals in that country, including calling for their immediate return to India,” said Bagchi.

“We had circulated emergency contact numbers and had also been extending assistance to community members. We are aware that some Indian nationals in Afghanistan still wish to return, and we are in touch with them.”

The spokesman said the repatriation efforts would resume after the resumption of flights to Kabul.

“Commercial operations from Kabul airport have been suspended today. This has forced a pause in our repatriation efforts. We are awaiting the resumption of flights to restart the process,” said Bagchi.

Furthermore, to help the Afghan students studying at the Indian Institute of Technology, Bombay, the institute has decided to allow them to stay on the campus.

“Nine Afghan students who were offered admission this year are continuing online classes from there. Now they realize that things aren’t going to be as easy as they were. They sought permission to stay at the campus here as a special case,” said Shubhashish Chowdhary, director of the Indian Institute of Technology, Bombay.

The Taliban have taken control of Afghanistan’s capital city, Kabul, on Aug. 15.

The terrorist group is now everywhere in the capital, walking the streets of Kabul with ease (and with American weapons in hand).

The Taliban’s influence on the city is becoming visible throughout, with men proactively painting over images of uncovered women outside of several beauty salons.