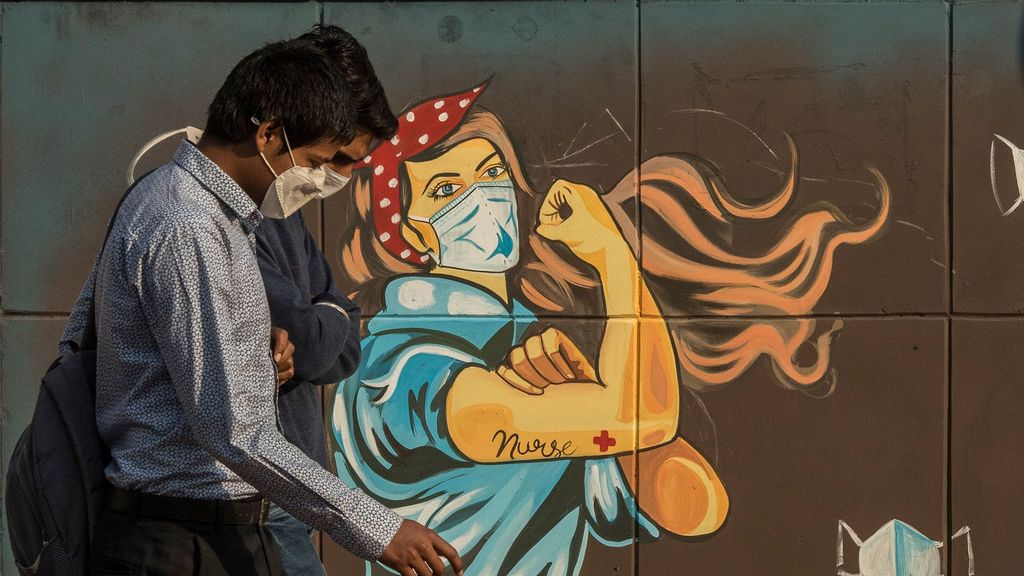 A man walks past a mural referring to the Covid-19 coronavirus painted on a wall in New Delhi, India. (Anindito Mukherjee/Getty Images)

NEW DELHI — The deal activity in India during the first half of 2021 amounted to $40.7 billion across 710 deals, including both private equity and strategic acquisitions, as per a report by consulting major PricewaterhouseCoopers.

“The deal activity displayed a decline owing to the pandemic,” the report said.

The second wave of infections resulted in lockdowns across states, thereby hampering ongoing deal activities, it said in the report titled ‘Deals in India: Mid-year review and outlook for 2021 — resilience and recovery.’

However, various timely policy and credit measures announced by the government to revive the economy and make it more resilient, and a stable banking system, have resulted in the growth of positive sentiments within the investor community.

The deal value of $40.7 billion recorded in the first half of 2021 was two percent higher than the second half of 2020, when deals worth $39.8 billion were recorded despite the unstable economical environment.

However, the deal value in the first half of 2021 was 14 percent lower compared to the same period last year.

The surge in deal activity was fueled by billion-dollar buyouts and numerous large fund-raising rounds by startups, boosting many of them into the unicorn club.

The report said private equity investors are also shifting their focus towards sectors such as technology and healthcare, which show more substantial potential for growth.

Strategic acquisitions’ activity remained tepid yet mainly operational due to the few mega outbound deals recorded in the first half of 2021.

The mergers and strategic acquisition deals space dominates domestic deals, with activity worth $6.2 billion recorded in the first half of 2021.

The private equity deal value in the first half of 2021 surpassed the previous comparable periods in 2020 despite the large deals closed by the Reliance Group last year, totaling $17.3 billion.

This trend is expected to continue as companies are looking for scaling operations in international markets, acquiring complementary business capabilities, and filling the gaps in their existing portfolios through acquisitions at lucrative valuations.

The report said key themes emerging in 2021 due to the uncertainty are growing divergence in asset valuations, the acceleration of deals in digital and technology, and increasing attention to environmental, social, and governance matters.

“India has one of the world’s largest startup ecosystems with over 40,000 startups and 50 unicorns,” the report said.

“There is a tremendous potential for striking cross-border deals, and special purpose acquisition companies (SPACs) could provide a boost to entrepreneurship by enabling access to capital. EdTech is the emergent sector as major players like Byju’s and UpGrad continue to raise funds.”