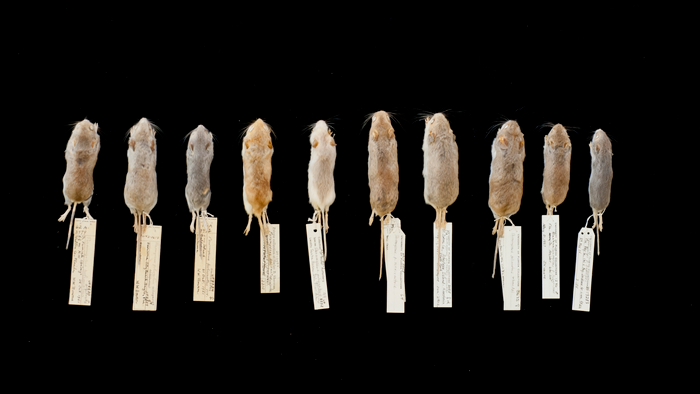 An analysis of nearly 140,500 measurements from more than 100 species collected over 80 years shows city-dwelling mammals are bigger than their rural cousins. (Kristen Grace/Florida Museum of Natural History)

Researchers found that urbanization is making animals bigger over time, contrary to expectations, after observing that mammals living in cities are longer and heavier than their rural counterparts.

Researchers at the Florida Museum of Natural History looked at 140,500 measurements from some 100 North American mammal species collected in the field and at museums over the course of 80 years.

The new study, published in Communications Biology, found that food readily available in areas densely populated by humans may account for the larger size.

“In theory, animals in cities should be getting smaller because of these heat island effects, but we didn’t find evidence for this happening in mammals,” said lead author Maggie Hantak.

Buildings and roads not only cause greater water runoff than natural environments, but they also trap and re-emit a greater degree of heat than natural landscapes.

“This paper is a good argument for why we can’t assume Bergmann’s Rule or climate alone is important in determining the size of animals,” she said.

While bigger may often be better, a diet of human leftovers may have consequences for urban mammals that haven’t yet been determined, Hantak said. “When you change size, it could change your whole lifestyle,” she said.

Hantak and collaborators used several databases for the study and created a model to examine how climate and human population density in a given area influence the size of mammals.

As temperatures dropped, body length and mass increased in most mammal species studied, in accord with Bergmann’s Rule. However, this trend was stronger when there were more people. The researchers suggested that urbanization rivals or exceeds climate as a cause increasing mammal size.

“That wasn’t what we expected to find at all,” said Robert Guralnick of the Florida Museum. “But urbanization represents this new disturbance of the natural landscape that didn’t exist thousands of years ago. It’s important to recognize that it’s having a huge impact.”

Global climate change, scientists had theorized, means that some animal species would decrease in size over time. Shrinking body size, they cautioned, could mean that smaller animals may have fewer and smaller offspring, thus putting pressure on meat-eating predators that would in turn become smaller.

“When we think about what’s going to happen to mammalian body size over the next 100 years, a lot of people frame that as global warming, causing animals to get smaller,” Guralnick said. “What if that isn’t the biggest effect? What if it’s that urbanization is going to lead to fatter mammals?”

The researchers also investigated how the behavior and habits of some species may temper or amplify the effects of climate and urbanization. Some species used hibernation or torpor to temporarily slow down metabolism and drop body temperature, shrinking more dramatically in response to increases in temperature than animals without these traits.

Hantak said this could have important implications for conservation. “We thought species that use torpor or hibernation would be able to hide from the effects of unfavorable temperatures, but it seems they’re actually more sensitive.”

Urbanization not only radically changes the natural landscape, but also bring new opportunities and threats for animals. The lack of predators, coupled with ample water, food and shelter help some species do better in urban areas than their rural counterparts.

“Animals that like living in urban environments could have a selective advantage while other species may lose out because of the continued fragmentation of landscapes,” Guralnick said. “This is relevant to how we think about managing suburban and urban areas and our wildlands in 100 years.”