Sequel has several positives, including another strong performance from Stephen Lang, but the script stretches credulity too far.
By Jacob Smith August 16, 2021
Facebook
Twitter
Linkedin
Email 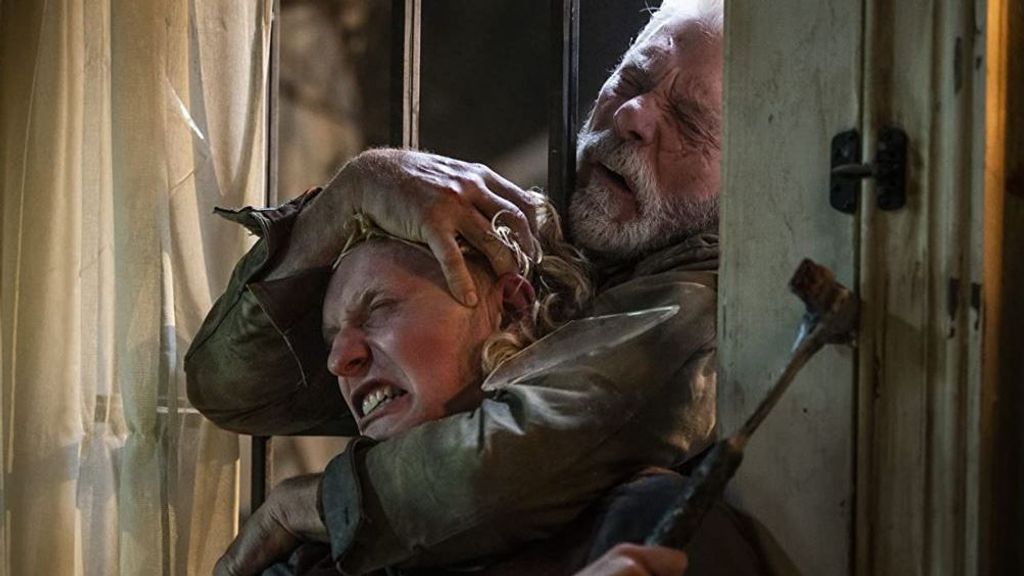 Several years on, and not much has improved in Detroit and its environs

In 2016, Screen Gems released one of the best horror films in the last couple of decades, “Don’t Breathe.” The premise involved a group of thieves breaking into the home of an old, lonely, blind man in Detroit, only to discover the man is far more dangerous than they expected.

What made “Don’t Breathe” such a cinematic thrill-ride was its stylistic horror similar to older “Resident Evil” games. The massive box-office success made it primed for a sequel, even though creative ideas and COVID-19 restrictions kept those plans on ice for a few years longer than the filmmakers expected.

The Story: “Don’t Breathe 2” takes place eight years after the events of the first film. Norman Nordstrom (Stephen Lang) lives in near isolation with his now 11-year-old “daughter” Phoenix (Madelyn Grace) and their Rottweiler in the suburbs of Detroit.

Nordstrom lies to Phoenix and tells her that her mother died in a house fire years ago, in order to conceal the fact that her real parents were meth addicts who caused the explosion. Nordstrom took Phoenix in and raised her as his own, but Phoenix yearns to live like a normal kid with friends.

One night, an armed gang attacks Norman’s house and seemingly wants the girl. It is discovered that the leader of the gang, Raylan (Brendan Sexton III), is Phoenix’s real father who was sentenced to eight years in prison after the explosion and now wants to reclaim his daughter. Phoenix is now in a psychological tug of war between the man who raised her and her biological father, and both men are deadly.

Bright Spots: “Don’t Breathe 2” continues the trope of twisting who viewers believe are the heroes and villains of the story. Lang was the standout in the first part and continues to be the best part of the sequel. Lang is given the impossible task of making audiences empathize with a man whose past includes kidnappings, murder and rape. Nordstrom, by his own definition, is a monster not worthy of redemption, so the film focuses the story not on his redemption arc, but on Phoenix.

The film’s empathy lies in Phoenix being forced to deal with being the daughter of two violent parents and her guardian who is only barely more respectable than them. She only wants a normal life, but that’s not in the cards. Grace is solid in her role and carries the load of portraying the only character that audiences root for.

The sequel turns up the brutality, as there are many more bodies to pummel and break this time. Much of what audiences liked in the first film is present in the second, but fans of the original will likely have some moral questions about the sequel.

Weak Spots: The biggest obstacle of the film is working around the narrative. Turning the character of Nordstrom into a hero when he was a psychotic villain in the last film is nearly impossible to pull off without making us hate the villains even more. Screenwriters Fede Álvarez and Rodo Sayagues try their hardest to work around this moral issue, but one can’t help to point out how the villain’s motivation is too far-fetched because of it.

The story feels contrived when the motivation of Raylan and his gang is revealed. The other bitter pill from a logical perspective is the “Daredevil”-like blindness displayed by Nordstrom. In the first film, it was completely logical for an old blind man to know the layout of his own home and have the leg up on his enemies, but in this film, Norman is apparently aware enough to find our antagonists anywhere in the city, which strains the suspension of disbelief.

The Takeaway: “Don’t Breathe 2” is a clear step down from the brilliance of its predecessor, but it is still a strong enough horror thriller to recapture the same gritty style as the first. Lang is still brilliant in his role as a crazy old man, whether you are rooting for him or against him.

See or Skip: “Don’t Breathe 2” is still a strong enough horror film to be worthy of a recommendation, even if it lowers the bar that its predecessor set five years ago.