Manny Pacquiao’s Jaw May Be Perfect Target For Yordenis Ugas

Styles make fights: Ugas may just have the ‘right’ one to defeat the legendary Pacquiao. 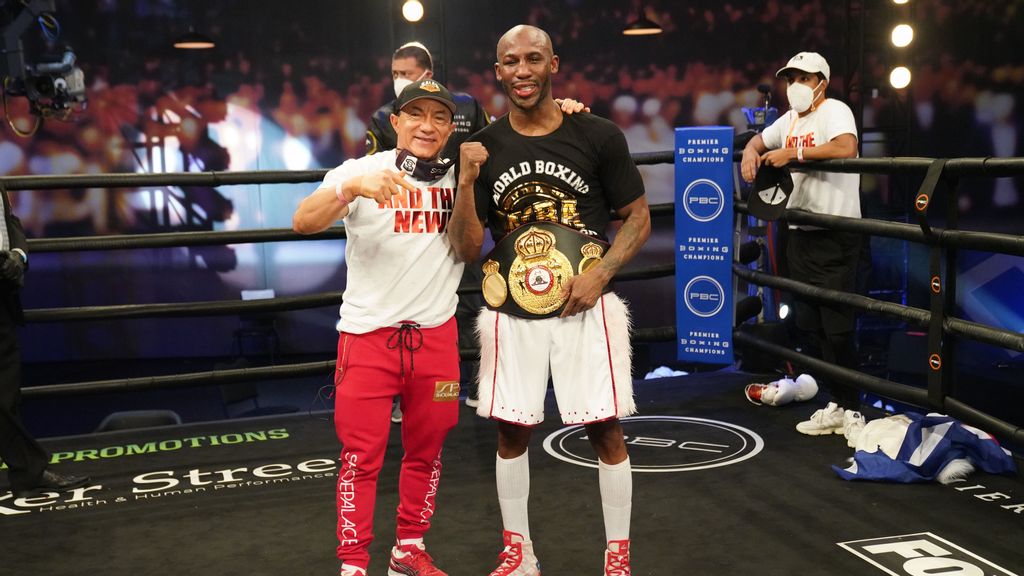 Juan Manuel Marquez’s right floored southpaw Manny “Pac Man” Pacquiao once each in the third and last round of his welterweight sixth-round knockout victory in December 2012. A similar scenario played out for Yordenis “54 Miracles” Ugas during a fourth-round TKO win in September 2016, his right dropping left-hander Bryant Perrella in the first and final rounds.

While Marquez left Pacquiao face-down and out cold, improving to 1–2–1 against his fallen foe, Ugas hammered a defenseless Perrella — who entered at 14–0 (11 knockouts) — with unanswered head and body blows in a corner of the ring to force a referee’s stoppage.

Those years-ago fights have taken on new relevance and significance, as Ugas (26–4, 12 KOs) may pursue a strategy on Aug. 21 like the one he used against Perrella, in defense of his WBA welterweight title against Pacquiao (62–7–2, 39 KOs), a Filipino 12-title/eight-division champion he meets at T-Mobile Arena in Las Vegas.

“Manny Pacquiao is one of a kind. He’s explosive and moves in and out,” Ismael Salas, Ugas’ legendary Cuban trainer, told Zenger. “But Manny Pacquiao is not Superman. Pacquiao’s coming up in weight and getting old, something we plan to make very clear.”

Part of Ugas’ strategy could be to soften Pacquiao with body blows as he did Perrella, causing Pacquiao to drop his hands and leaving open the left side of his jaw.

If that happens on Aug. 21, Ugas could cash in on a Kryptonite right hand against “Pac Man.”

“If Pacquiao gets hit by Yordenis, then he will go down,” said Salas. “If we get the opportunity, we will go for it.”

A 2008 Olympic bronze medalist for Cuba, Ugas is 11–1 (5 KOs) under Salas at 147 pounds, including a 3–0 mark against undefeated fighters. Ugas’ lone setback was by disputed split decision to then-WBC champion Shawn Porter in March 2019.

A former sparring partner for Pacquiao, Porter was cut around his right eye by a legal 10th-round punch from Ugas, and considers the Cuban to be every bit the threat Salas claims he is.

“Ugas uses a really tight shell defense,” Porter said of an awkward style he found difficult to navigate. “Ugas throws a mean, overhand right, nice uppercuts and body punches that don’t usually come from the outside.”

“I’m watching tape on him, and he’s going for the home run a lot,” said Roach, a seven-time Trainer of the Year. “He threw a big overhand right in one of his fights. He started from a little bit too far away, missed and fell to the floor. I said, ‘This guy is just going for the f—ing kill.’”

Ugas is 5–1 (3 KOs) against southpaws as a pro, including 3–0 (2 KOs) against left-handers since linking up with Salas. Perrella had scored 11 consecutive knockouts before joining two other southpaws vanquished by Ugas under Salas.

Ugas earned a pair of victories over left-handers in 2018, scoring a seventh-round TKO of Ray Robinson (February) as well as a unanimous decision over Cesar Miguel Barrionuevo (September).

Ugas’ past three victories are a one-knockdown, near shutout unanimous decision over previously undefeated former champion Omar Figueroa Jr. (July 2019), and, in 2020, a seventh-round stoppage of Mike Dallas (February) as well as a title-winning split decision over rugged Abel Ramos (September).

With his victory over Ramos, Ugas became the first Cuban 147-pound champion since Jose Napoles defeated Curtis Cokes in April 1969.

“Yordenis’ fundamental skills are very deep,” Salas said of Ugas, who stands 5-foot-9 to Pacquiao’s 5-foot-6 with a narrow reach advantage of nearly 70 inches to “Pac Man’s” 67. “Yordenis is a big, solid, strong 147-pounder with a good chin, a good punch, a great heart and a threat to anyone.”

Ugas was just announced on Aug. 10 to replace IBF/WBC champion Errol Spence against Pacquiao in their Aug. 21 bout, but he has won at least three fights on short notice, including those over current interim champion Jamal James (August 2016) and title challenger Thomas Dulorme (August 2017).

“I’m used to taking fights at the last minute. It’s really nothing new to me,” said Ugas. “When I got the call that I was going to face one of the best fighters in history [Pacquiao], it just pushed my excitement to new highs.”

“Once I knew I was fighting Pacquiao, I got right back to work. I’m always ready to fight anyone they put in front of me,” said Ugas. “Fighting Manny Pacquiao means the world to me. I’m fighting for my legacy and for my country. This is the most important fight of my life.”

“Yordenis is always ready for the worst-case scenario,” said Salas. “It’s like he was born ready. It never takes him by surprise.”

“I never thought I would be defending a title against Manny Pacquiao, but for the past five years I’ve been one of the most active and successful boxers and I’m ready to prove myself once again,” said Ugas.

“I’m well aware that Pacquiao is the favorite, but at the same time, I’m a champion. I have full confidence in my ability to get a victory. Underestimating Manny Pacquiao is out of the question. He’s going to be ready. I have prepared to face the best so that I can become the best.”

Pacquiao, 42, is 8–2 with one knockout since Marquez exploited the flaw in his offensive wizardry. He will end a 25-month ring absence since his one-knockdown, split-decision victory dethroned Keith Thurman in July 2019, dropping “One Time” to 29–1 (22 KOs).

“Underestimating Manny Pacquiao is out of the question,” said Ugas. “He’s going to be ready. I’ve prepared to face the best — Manny Pacquiao — so that I can become the best.”

“There is nothing Manny Pacquiao can do to surprise us,” said Salas. “This fight is the perfect dream matchup for Yordenis, and he is ready.”

«Previous Post
Fixing Supply-Chain Snags A Top Priority In Several U.S. Sectors»Next Post
3 Movies Not Playing At A Theater Near You