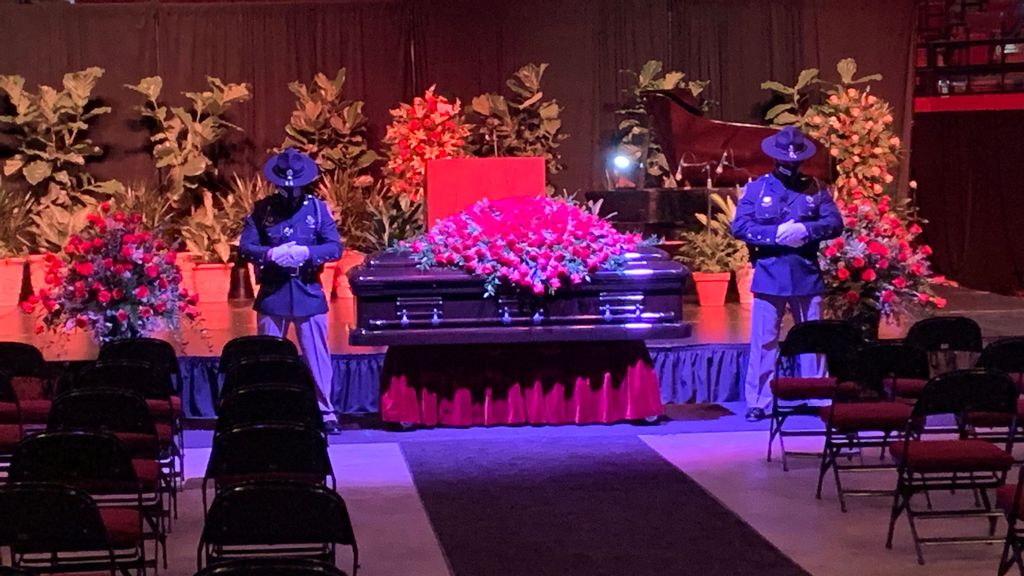 Hall of Famer Bobby Bowden, who coached 44 years at Florida State University, lies in honor at the Florida Historic Capitol in Tallahassee on Aug. 13. Hundreds turned out for his memorial service on the FSU campus on Aug. 14. (Hamil Harris/Zenger)

TALLAHASSEE, Fla. — The memorial service for legendary Florida State University head coach Bobby Bowden was nothing short of a celebration.

Generations of football players and coaches joined his family over the weekend to honor a man whose life was dedicated to faith, family and football.

Only Bowden, who died at age 91 pancreatic cancer on Aug. 8 of, could have had a service led by a 12-year NFL veteran and a Southern Baptist pastor and music that went from “Oh Happy Day” by the Florida A&M gospel choir to the school’s war chant played by the FSU Marching Chiefs.

“We come today to celebrate a life that is worthy of celebration,” said the Rev. Bobby Butler, an outstanding FSU cornerback who played for the Atlanta Falcons for 12 years. Butler, who played on Bowden’s first FSU team, officiated the funeral, more appropriately designated a “Celebration of Life” at the Donald L. Tucker Civic Center at FSU in Tallahassee, before a crowd of hundreds.

The most touching moments came from Bowden’s family, as Ginger Bowden Madden read a letter her father had written after her husband was killed in a car accident on Sept. 10, 2004.

“When the tragedy occurred, I saw again the bond of love our family has for each other,” he wrote. “I witnessed the inner strength of Ginger in a time of mortal crisis and the love of her mother, brothers, sisters.” Before he ended the letter, he wrote: “I choose Jesus as my savior and commit to him each night, this is my fervent prayer, Love Dad.”

Tommy and Terry Bowden said their father’s favorite place was at his desk in the basement, where he studied the Bible. Tommy said he waited most of his life to hear the words ‘I love you’ but they didn’t come.

“I looked over at him and said: ‘Dad I love you.’ And he said, ‘Thank you, appreciate that,” said Tommy, whose comments sparked a wave of laughter at the civic center. “Dadgum, I waited for 67 years, and this is it.”

Bowden was returned Sunday to his home in Birmingham, to lie in repose at Samford University (formerly Howard College), where he played football and baseball and ran track. He was buried in a private service with pastor Raines and FSU and NFL legend Deion Sanders in attendance.

When Bobby Bowden first arrived at Florida State University in 1976, Doak Campbell Stadium was a towering collection of steel beams and concrete ramps to hold the 40,500 fans who grew used to mediocre seasons.

“He disguised his intellect with his self-depreciating humor,” said Jeff Hubright, an Air Force ROTC recruit who arrived on the campus the same year as Bowden in 1976. In his freshman year, FSU was stomped by rival University of Miami 47-0.

But for the next three decades (1976 to 2009), the stadium doubled in size as Bowden built FSU into a national football powerhouse. Major opponents, such as Michigan, Nebraska and Ohio State, were often blindsided by Bowden’s coaching prowess and his “ah, shucks” style.

While big-time football programs today rely on their facilities, high-tech scouting and recruiting magazines, Bowden was FSU’s best recruiter. His base was international and his success was due to his faith, charm and Southern-fried humor that won hearts for four decades.

“When he saw me, he asked, ‘Would you like to play football at Florida State?’” said Billy Allen, who Bowden recruited out of the military. “I was the player of the year for the Air Force, and I had never heard of Florida State. I said. ‘Where is that? Is it near Miami?’”

Bowden won Allen over with his heart.

“He was sincere, and he never forgot players,” said Allen, an outstanding running back and defensive back at FSU in the 1980s, who was drafted by the New Orleans Saints. “He loved everybody he met. If he didn’t remember your name, he remembered you. He told me: ‘I can’t give a scholarship, but what I can give you is an opportunity.’”

During Bowden’s early years at FSU, some of his best players were walk-ons, those who aren’t recruited but may receive scholarships later. He was great at identifying and recruiting talent, including Larry Key, Willie Jones, Bobby Butler and All-American nose guard Ron Simmons.

Former NFL player and FSU All-American Derrick Brooks talked about Sue Hall — described as the gatekeeper for Bowden —and how she was the last person to encourage him after he was summoned to Bowden’s office.

“Coach Bowden said: ‘I am really disappointed in you,’” said Brooks, who had no idea what he had done on or off the field. But Brooks had made a C on his report card, and Bowden had called his mother.

Fred Jones, who was a linebacker at FUS, went from being a walk-on to being a scholarship player. “I came from a small town, and Coach Bowden gave me the opportunity to play college football when other programs did not,” he told Zenger. “He treated me like a father.”

So many other players told similar stories. Some had scholarships, but others were walk-ons who simply were given the opportunity to play football.

The day before the memorial service, family members walked past Bowden’s statue outside Coyle E. Moore Athletic Center on the FSU campus, where hundreds paid their final respects. Long after the family was gone and the sun was setting, former players were still telling their stories in the parking lot of the stadium.

“He stayed consistent with his message,” former NFL running back Warrick Dunn said in an interview after the memorial service. “Eventually, it is coming down to values.”

Bowden was the second-winningest college coach of all time, after Penn State’s Joe Paterno. The football field at FSU is named in his honor.