VIDEO: With Nowhere Else To Go, Thousands Flee Taliban Takeover To Kabul Park

Afghans are pouring into displacement camps set up in Kabul less than a week ago, but there’s no food, security or toilets. 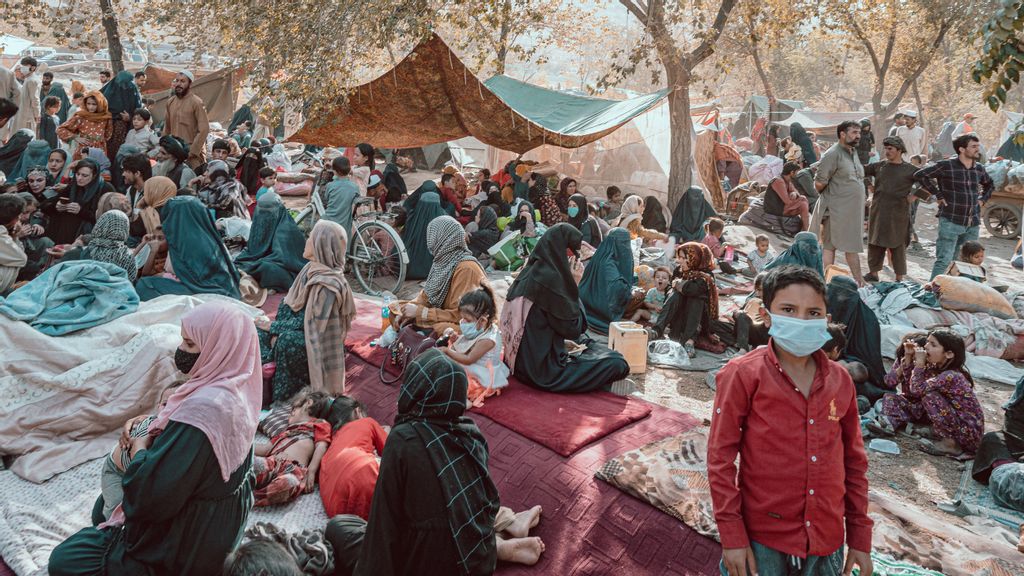 In the last few days, the capitals of the Afghanistan provinces of Kunduz, Takhar and Baghlan have fallen to the Taliban. This park houses up to 2,000 people who have fled the fighting in the northern areas of Afghanistan. It is one of the many parks that are being used to house the internally displaced. (Jacob Simkin/Zenger)

KABUL — Crammed into cars, hundreds of Afghans are fleeing their once quiet villages every day as the Taliban battles to take back control of Afghanistan. Some are headed to the homes of family in the government-controlled capital of Kabul, but others are lucky to find a patch of hard earth on the sweltering edges of the city.

The rapidly deteriorating humanitarian crisis has been getting worse by the day since American forces started their withdrawal — in line with the 2020 Doha agreement — after nearly two decades in Afghanistan.

For those pouring into Kabul to flee the Taliban, it’s a situation that defies any optimism.

“I am now a widow. I have no money. I had to take a loan to leave, and have nowhere else to go,” Halima, a villager from Kunduz province, told Zenger in a makeshift camp in a park in Kabul’s Police 15 district.

She pulled up her dress sleeves to reveal scars from bullet wounds.

“Many bullets have hit me,” she said. “All we want is for the Taliban to join the peace. We want the peace.”

Halima, who is in her 40s, said her late husband, who was a police ranger, was killed three years ago in fighting with the Taliban. Then two years ago, she lost her two sons in a rocket attack during a Taliban assault. She still carries around their identification documents — her only possessions, and her only protection from the sun.

“I am here with my daughters. I told them we had no choice. We couldn’t bring anything,” she said between guttural sobs. “We worry about the U.S. withdrawal. We would be happy for them to stay.”

“Maybe then we can go home to our villages.”

Yet the pleas appear to be futile.

The U.S. withdrawal from Afghanistan is almost complete nearly two decades after American forces ended Taliban rule, with the last remaining soldiers slated to depart the country on Aug. 31.

While observers expected the Taliban to make territorial gains after U.S. forces left, the pace of the gains made by Islamic fundamentalist movement has surprised many. The Taliban rapidly cut through villages like Halima’s the north — and now even Afghanistan’s second largest city, Kandahar, in the south.

U.S. President Joseph R. Biden Jr. has stood by his decision to end the “forever war.”

“Afghan leaders have to come together,” Biden told reporters at the White House on Tuesday. “They have got to fight for themselves, fight for their nation.”

In the park for the displaced, though, many traumatized Afghans say they now feel powerless.

“If I stay in my village under the Taliban, I cannot go to school,” 14-year-old Maheen told Zenger. “But we do not want such a life, we want an education.”

“The Taliban came to my house and said, ‘you should leave,’” Samiullah Danish, 45, said from behind a blue burka. “But my husband was injured — how could I leave?”

In the end, Samiullah said, she made the gut-wrenching decision to leave behind her spouse, who was attacked by Taliban fighters in an open-air market as she fled with their children.

“We are losing our lives as they are laughing at us,” she said.

Some 400,000 Afghans have already been internally displaced this year. The U.N.’s International Office of Migration estimates about 50 percent of Afghanistan’s population of 18.5 million will need humanitarian aid by the end of the year due to the conflict, which has been compounded by the COVID-19 pandemic.

“There was so much fighting, and the Taliban was attacking our houses. Everyone was escaping from this battlefield,” another survivor, Mossama, told Zenger, crouching on a mat beneath the shade of a tree.

“They burned our house. They went around burning houses from one to the next. I have worked all my life like a man to build this house. If it is destroyed, who will rebuild it again? If I lose that, I can never go back.”

Mossama, who guessed she was about 40, said her husband, also a police officer, was also killed in a conflict seven years ago. Like Halima and Samiullah, she fled to Kabul with no possessions but the clothes on her back.

While she does not know her exact age, Mossama said she could remember what it was like to grow up under Taliban rule before the U.S. invasion in 2001. She said the prospect of their return was frightening.

“I am very scared because of the Taliban,” she said. “I request the world to bring peace to my country.”

According to the Foundation for Defense of Democracy’s Long War Journal, “the Taliban now threatens 16 of the nation’s 34 provincial capitals, while 18 of the provinces in their entirety are under direct threat of falling under Taliban control.” The group says Taliban-ruled districts have tripled from 73 to 221 this year.

The situation has exposed the lack of preparation to house those refusing to bow to Taliban rule.

For Mariam Sayedzada, a local women’s rights advocate and camp representative, the makeshift displacement camps now dotting Kabul are also dangerous places. While some new arrivals sleep under sagging tents or strips of material strung up around parched trees, most end up resorting to sleeping in the open air.

“There are no facilities like toilets, there are only a few volunteers, so it is very difficult to manage, and each hour more and more people are coming,” Sayedzada said. “There is no security, and we need to provide a safe place, especially for the ladies.”

Sayedzada estimated there were more than 2000 people already camping at the park in Police 15 district.

It is unclear if formal settlements for the internally displaced will be created by the beleaguered government, and Afghanistan’s Ministry of Information (MOI) did not immediately respond to a comment request.

Another new arrival to the park, 29-year-old Nadia said she and her five young children had hunkered down in a “safe room” as a battle between government forces and the Taliban intensified in her home village, before fleeing to Kabul.

“When the Taliban came, they focused on a commander’s house near us,” Nadia told Zenger. “But because my husband is prior Afghan military, he could not leave.”

In a moment of let-up, though, she said they made a run for her car, leaving her husband.

“I thought maybe the car would be damaged. Maybe we will be in an accident. We were under so much stress,” she said, explaining that she still did not know what would come next. “Maybe the Taliban will conquer all of Afghanistan. We never feel safe. We are always under stress. Every moment is horrible.”

The park has no lights or toilets, and many women say they feel especially vulnerable to assaults now. But the men, some crippled by Afghanistan’s decades of bloody battles, are also struggling.

“The Taliban was looking everywhere for someone to kill. There were two junkies on the street, and they just killed them,” said Syed Hasham, 56, who just arrived from Takhar province in the country’s northeast.

“I had to pay with all the money I had to get a car to take me here.”

Even as war had pockmarked swathes of his country, Syed said life for him had been relatively normal in recent years: He worked as a laborer, providing for his wife and six children. Now all he has is a tattered tent.

The Taliban, he said, broke into the house and stole everything, forcing him to flee.

“It is not even mine — someone donated this to me,” he said of the ramshackle tent.

Syed said that he had welcomed the U.S. forces who kept the Taliban at bay in his home village. Now, though, he said he was not sure what the future would hold for his family.

“We did not want the Taliban. If the Taliban is here, we cannot stay,” he said.

“We must leave Afghanistan.”