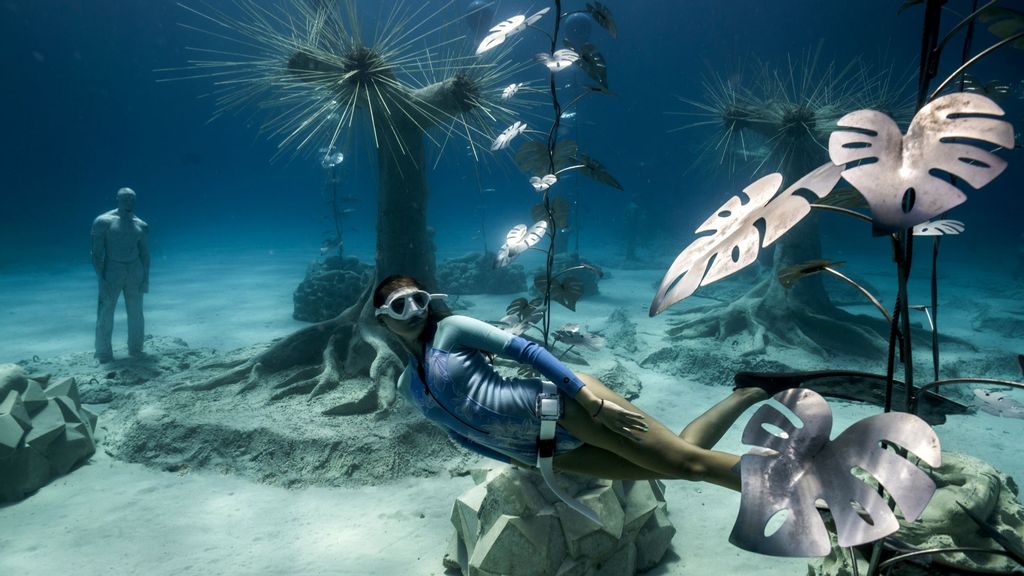 Oceans and seas fuel his creative impulses. For his latest project, he designed 93 sculptures for the first underwater museum in the Mediterranean. The Museum of Underwater Sculpture Ayia Napa (MUSAN) opened Aug. 2 off the coast of Ayia Napa, Cyprus.

The artwork at the newest site is planted at 26-33 feet deep, so the sculptures of trees, statues and children at play are accessible mainly to scuba divers, freedivers and snorkelers. Some sculptures rise all the way to the surface of the water.

Taylor is an environmental artist: All of his sculptures are made from non-toxic cement, are free of harmful pollutants and become part of the local ecosystem.

Taylor’s installations, a kind of artificial reef, “can attract a host of marine species, including corals, sponges, hydroids and algae, increasing overall reef biomass and aggregating fish species, which in turn can support an entire marine ecosystem,” according to his website.

“This particular one in Cyprus … is a museum with an entrance and an exit,” he said. “The idea is you start at the entrance and then visit all the installations, one after another. And that way it builds up a story, a narrative as you swim through it, that I hope leaves people with a different impression of the sea after the visit.”

Taylor, originally from Dover, England, also created the world’s first underwater sculpture park and museum at the Molinere Underwater Sculpture Park in Grenada, in the Caribbean, in 2006.

One of his most ambitious projects was creating the world’s largest underwater sculpture museum off the coast of Mexico, the Cancun Underwater Museum.

The sculptures at the new underwater museum in Cyprus are inspired by man and nature, and feature themes from Greek mythology.

“I think it has lots of messages built within it,” Taylor said. “It’s about the environment, and certainly it’s about creating a complex habitat space under the water.

“It’s about taking some of the values that we assign to some forests we have on land, as they are sort of centers for biodiversity, and trying to replicate that underwater.

“Within that installation, there are lots of different narratives and lots of little stories. But mostly, I think it’s a message of hope and about human intervention sometimes being positive.”

The Cyprus project is different from his previous works, Taylor said.

“It’s the first time I’ve ever built trees and sculptures that go from the sea floor to the surface of the sea. That has been quite a challenge. The first time, I really made floating sculptures.

“They go from the sea floor up to the surface, so snorkelers can also appreciate them. And they’re also designed so they aggregate fish at different levels of the water column. It was incredibly challenging because it was done during a pandemic. We were in full construction in Cyprus in March last year when the pandemic hit.”

An international crew of around 15 helped to complete the underwater art project.

“We have staff from Mexico, Spain, Bangladesh and the UK. As I’ve done projects around the world, I keep in contact with some of the best staff members, and we meet up to do the construction,” he said. “And you know, during the pandemic, that was really, really tough.

Taylor said the Mediterranean has lost a huge amount of marine life.

“Overfishing has been so predominant in the Mediterranean that a lot of protected areas, a lot of habitats, are really missing fish stock. That was quite a motivation, and I wanted to create a sanctuary for marine life.

“Also the waters of Cyprus were exciting because the conditions are very good, the extremely warm water, it’s extremely clear, but it also has a really rich maritime history. There are lots of archeological artifacts in the water surrounding Cyprus, so it has a  rich history to draw from.”

The artist is still working on a project for Australia, for the time when he is able to travel there.

“I hope to install that by the end of the year. And then I’m also looking at some quite ambitious projects in the Middle East.

“There are a lot of different pieces, and I think a lot of it is all about holding people accountable, holding industries, governments, all sorts of different people responsible for their actions. And I hope people read some of those stories within the works.”