Opposition and ruling parties blame each other for ruckus at parliament where 50 marshals were called in and chaos ensued. 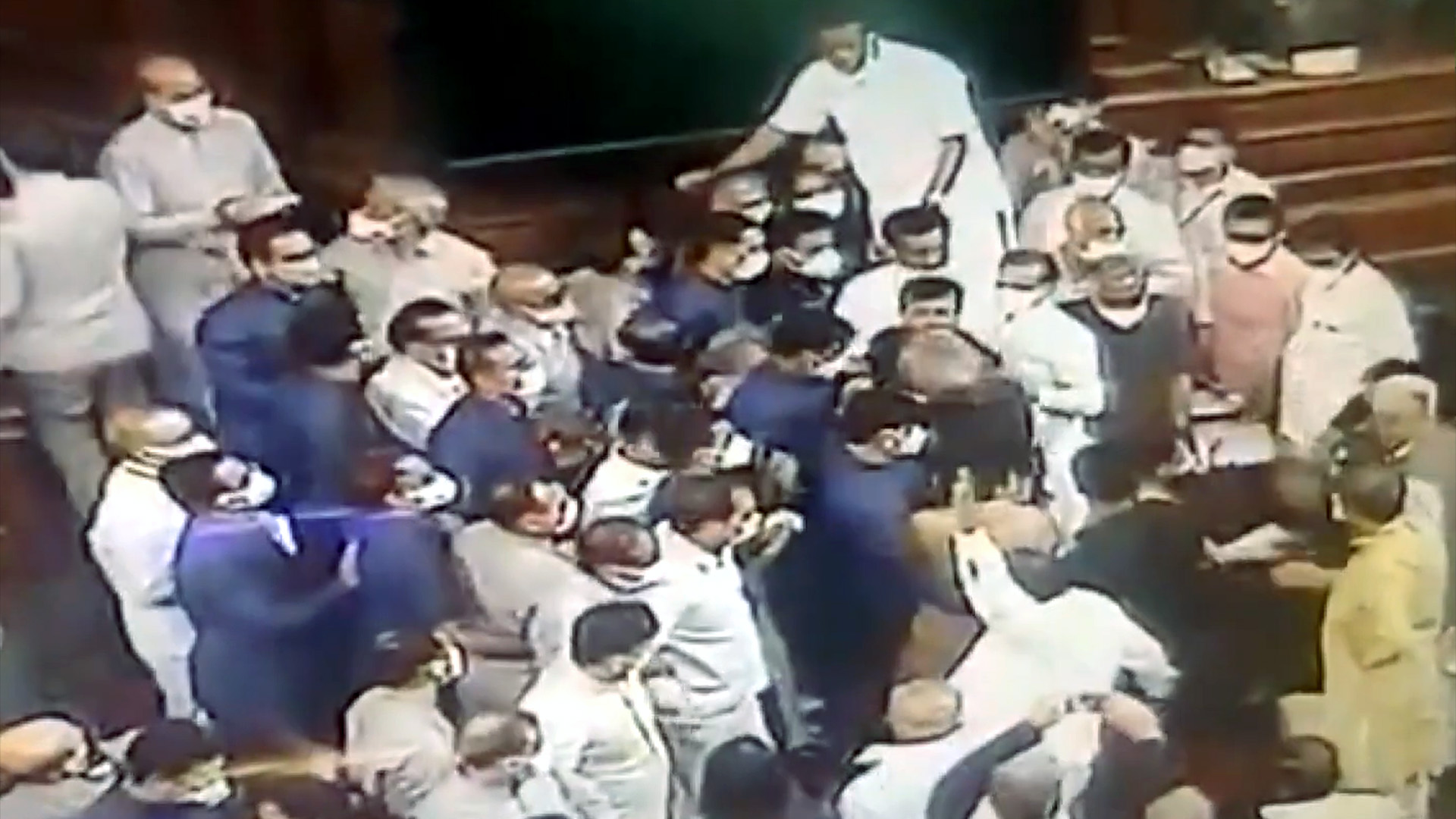 Intense scenes played out at Rajya Sabha, the upper house of the Indian Parliament, on Aug. 9 as opposition party ministers stormed the well of the house shouting anti-government slogans and tearing papers. (ANI/Youtube)

NEW DELHI — Intense scenes played out at Rajya Sabha, the upper house of the Indian Parliament, on Aug. 9 as opposition party ministers stormed the well of the house shouting anti-government slogans and tearing papers.

An internal security report of the Rajya Sabha said that as soon as the General Insurance Business (Nationalization) Amendment Bill, 2021, was introduced for consideration, opposition members stormed into the well of the house.

As opposition members started tearing the papers and throwing them towards the chair of the house, an army of 50 marshals or security staff were rushed in. But this led to further chaos and, amid this melee, opposition party members claim they were maltreated.

Two marshals have submitted written complaints about the behavior of opposition members during their protest in the Rajya Sabha.

The report states that opposition party Trinamool Congress member Dola Sen “obstructed” the way of Leader of the House, Piyush Goyal, and Parliamentary Affairs Minister Prahlad Joshi was also “pushed” by her.

Some male Members of Parliament, engaged in protests, rushed towards her and tried to breach the security cordon, according to Akshita Bhat, a security official positioned inside the Rajya Sabha chamber to protect the chair of the house.

Bhat said that “as a result of their deliberate and violent action,” she sustained “multiple abrasions, swellings, and hematoma [left shoulder] and twisted left wrist.”

Another security official, Rakesh Negi, said in his complaint that MPs Kareem and Anil Desai (from Shiv Sena party) “tried to break the security cordon made by the marshals.”

Negi said that Kareem caught hold of his neck (posterior side) during this process to drag him out of the security cordon chain, which led “to momentarily choking and suffocation.”

The bill in question was subsequently passed.

“The way the Insurance Bill was passed was not right,” Shiv Sena MP Priyanka Chaturvedi said.

“We all were protesting because it is an anti-people bill. This will lead to privatization. The way women MPs were manhandled and MPs were treated like goons, pushed, and threatened to remain silent is shameful. This is my first term. I was hoping to raise people’s voices in Parliament, but the government made attempts to crush that, too.”

“More than 40 men and women were brought into the house from outside to control the MPs. It is painful. It is an attack on democracy.”

Verma, who was allegedly seen jostling a woman marshal, said: “One of our MPs (Members of Parliament) got injured during the incident in the upper house.”

“What is the point of deploying so many marshals in the House. Why would I apologize? Who is responsible for this incident? Running parliament proceedings is the government’s responsibility. We are just putting people’s voices in the Parliament. This will happen if their voices will not be heard.”

The ruling party slammed the opposition on Aug. 12 for its bad behavior in the Rajya Sabha, terming the incident a disgrace in the history of India.

“Deplorable actions by opposition Members of Parliament have become a norm,” they said.

“Their actions in this session were not an exception but a continuation. From tearing of the rule book last year to the opposition indulging in most unparliamentary conducts ever witnessed by this House, the conduct of opposition is becoming shameful day by day.”

“The opposition questions over bills being passed in din,” said the Ministry of Parliamentary Affairs in a statement. “However, it is their refusal to allow parliamentary debate that has left no choice.”

“From merely shouting, they have shifted to violence and manhandling staff to disrupt the parliamentary process. Also, where was this concern about passage without discussion when numerous bills were passed in din during the United Progressive Alliance rule? Between 2006 and 2014, the United Progressive Alliance (UPA 1 and 2) government passed a total of 18 Bills hastily.”