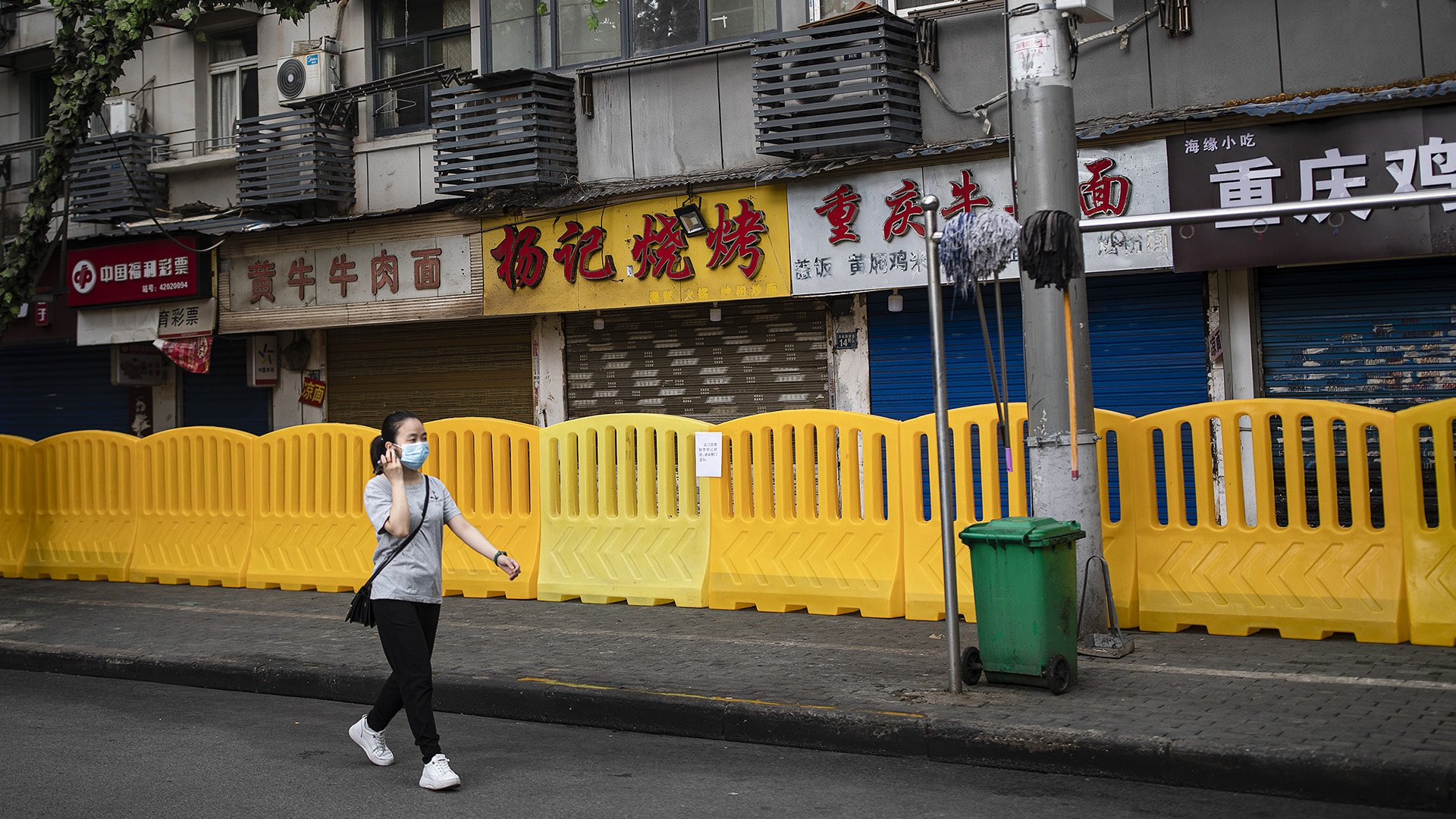 A woman wears a mask while walking past a makeshift barricade built to control entry and exit to a residential compound on Aug. 11, 2021 in Wuhan, Hubei Province, China. (Getty Images)

TAIPEI, Taiwan — As shown in the videos that are being resurfaced on social media, Chinese officials are reportedly locking up their residents inside their homes as China grapples with a nationwide surge of the Delta variant of Covid-19.

Local media claimed that it was a repetition of the extreme tactics seen in China’s Wuhan city at the start of the pandemic.

Multiple videos began to surface on Weibo, Twitter, and YouTube showing personnel in hazmat suits placing iron bars over the doors of people’s homes and hammering them in place to prevent anyone from leaving.

In one Twitter post, a man appears to be caught in the act of allegedly breaching his quarantine to “get some air” before returning to his apartment.

In a video uploaded to YouTube, the editor claims that if someone is found to have opened their door more than three times in one day, they will be locked inside by the authorities. People dressed in full PPE can be seen hammering large metal bars over a doorway in an X pattern.

Toward the end of another video, originally posted on Weibo and later uploaded to Twitter and YouTube, shows several doors being sealed and a recording being broadcast to residents, declaring that people must not go out. As soon as they are caught, their entries will be locked.

Twitter users claim one controversial video shows a young girl dancing in front of workers in hazmat suits moments before she is locked in.

A video uploaded by the Twitter account “Things China Doesn’t Want You To Know” alleged that if anyone in the apartment tests positive or is found to be a contact of a confirmed case, the entire building will be sealed for two to three weeks and potentially longer.

“The Chinese Communist Party is locking people inside their homes again,” read a tweet.

“If someone tests positive or has positive contact tracing, the whole building gets sealed for 14 to 21 days, sometimes longer.”

In a scene reminiscent of the early days of the pandemic in Wuhan, footage posted on Twitter on Aug. 8 shows people in apartment complexes in Jiangsu’s Yangzhou City screaming “Yangzhou jiayou!” (Go Yangzhou!) at the top of their lungs.

China’s National Health Commission on Aug. 9 announced 143 new confirmed Covid-19 cases in at least 17 provinces, the most reported since Jan. 20.

Of these, 35 were imported from abroad, and 108 were local cases, including 50 in Jiangsu Province, 37 in Henan Province, 15 in Hubei Province, and six in Hunan Province. In addition, the Jiangsu Commission of Health reported two cases in Nanjing City and 48 in Yangzhou City.

China has punished nearly 20 more officials in its Guangdong Province’s Guangzhou for negligence in curbing the spread of coronavirus soon after it punished about 47 officials nationwide for the same reason.

Guangzhou city on Aug. 12 announced punishments to 20 officials for their neglecting their duty in dealing with the local Covid-19 outbreak in May and June and fired the director of the city health commission and district-level party chief.

Officials, including local governments, health commissions, hospitals, and airports, were punished for negligence.

In Nanjing, the capital of Jiangsu province, 15 officials were held accountable for allowing infections to spread at the Nanjing Lukou International Airport.

Some officials were detained, while others were received penalties ranging from suspension to severe warnings.

China announced in May to fence all provinces and cities to keep out the novel coronavirus after the nation essentially banished the pandemic after it first emerged in the city of Wuhan.

The measures were hastily put in place before the summer of 2020. China’s firewall has become nearly impregnable and is being strengthened as the West edges towards loosening its entry requirements.