Not So Nuts: Leaping Squirrels Could Hold The Key To Boosting Robot Agility, Say Scientists 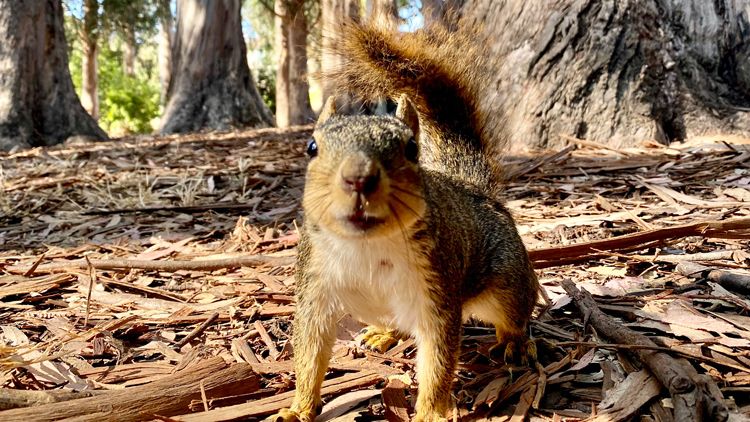 Squirrels can be cute, but they are also ninja-like — twisting in mid-air to acrobatically grab peanuts and elude predators. By modeling cognition and decision-making among squirrels, scientists say the result could be a world-first robot with the abilities of a flying squirrel.

Jumping from branches, judging unpredictable distances, and adapting in mid-leap, squirrels have an instinct for survival and adaptability that interests scientists for possible benefits in fields as varied as human surgery and physical therapy to robotics and military applications.

“I’m fascinated by squirrels and have studied them for 40 years. I did my PhD on squirrel cognition: their memory and decision-making,” said Lucia Jacobs, professor of psychology at University of California, Berkeley. Jacobs operates the Squirrel School at UC Berkeley, a lab that studies what Jacobs has dubbed cognitive biomechanics. It is part of a multi-university consortium funded by the Army Research Office (ARO).

“Biomechanics studies locomotion as it varies with the environment. Spatial cognition is used to learn, adapt, and execute routes in complex environments,” according to the Squirrel School website. “To understand these decisions, we need to integrate spatial cognition and biomechanics, into what our lab has termed cognitive biomechanics.”

While the two disciplines study animal locomotion, they had not been integrated prior to the Squirrel School’s founding to understand animal decision-making.

Trained as an evolutionary biologist, Jacobs has long been interested in squirrel foraging habits and how and where they decide to store their food. This led her to join Nate Hunt, professor of biomechanics at the University of Omaha, in research on squirrels’ split-second decisions as they search for food and elude predators.

According to a study they recently published in Science, squirrels have cognitive abilities that allow them to weigh risks before leaping for food or escaping predators such as hawks.

Their cross-disciplinary research, along with co-authors Robert Full, a professor of integrative biology, and former graduate student Judy Jinn, offers applications in many fields and can help robotics designers create robots that can move over broken ground and the rubble of collapsed structures.

Squirrels, as well as some lizards and insects, have long been known by biologists to move with agility. Jacobs and her colleagues examined how squirrels know to look before they leap or how they evaluate the biomechanical probability of a safe landing.

While Hunt had studied insect locomotion, his lab had not studied mammals. “It also had not studied the interaction of cognition and locomotion, nor had it examined cognition,” Jacobs said. “That’s the interesting question. There are a lot of studies about locomotion, climbing and leaping, in animals. But they never ask of the animal, ‘What are you thinking about? How are you learning quickly to improve your performance?’”

Jacobs is fascinated by squirrels’ ability to survive and thrive in arboreal and urban environments. She and her co-authors liken squirrels’ ability to navigate “complex and unpredictable environments” through a combination of “evolved biomechanical adaptations and learned behaviors” to acrobatic parkour enthusiasts who leap, tumble and climb, much like the character played by actor Matt Damon in the “Bourne” series of movies.

Squirrels make split-second, death-defying leaps and acrobatics that depend on their skill and learned behavior. Using simulated branches that they could manipulate for pliancy and size, scientists saw that the free-ranging fox squirrels (Sciurus niger) leapt from the unfamiliar simulated branches with ease and never fell during the experiment.

The squirrels “decided where to launch by balancing a trade-off between gap distance and branch-bending compliance. Squirrels quickly learned to modify impulse generation upon repeated leaps from unfamiliar, compliant beams.”

When posed with unanticipated challenges, the squirrels used “parkour” techniques, thus innovating on the fly. “Squirrels deciding and learning how to launch, and land, demonstrates the synergistic roles of biomechanics and cognition in robust gap-crossing strategies,” the study abstract said.

To learn how squirrels operate, researchers went to an urban park where they lured squirrels to an obstacle course that the rodents had to negotiate in exchange for peanuts. Squirrels were a bit cautious when first approaching the simulated “branches,” but their boldness and speed soon grew.

Before leaping over a gap, they appeared to make a tradeoff between the pliancy of the simulated branch and the distance to cross. In just a few trial jumps, the squirrels adjusted their launching techniques to the novel properties they encountered. It was the compliance, or flexibility, of the simulated branches that squirrels appeared to weigh more carefully than the gaps encountered.

Researchers theorize squirrels’ crafty claws are the secret to their decision-making and arboreal success, even when they fumble.

“A long-standing goal of robotics and its intersection with biomechanics is to continue improving agility in robots,” said Jinn, who trained in psychology under Jacobs. “Famous robots labs, like Boston Dynamics, use nature as inspiration, as clearly seen by the names of their robots.”

A challenge that designers face is that “robots still find something as simple as rough terrain difficult to navigate,” Jinn said. Jumping must be carefully programmed and usually constrained to previously known gap distances.

Pointing to the value of the team’s research, Jinn said, “Squirrels, though, are able to launch themselves through trees with seemingly little effort. Our paper has also shown that provided with a novel challenge, they can quickly adapt.”

“There is a space here to apply what we’ve learned from squirrels,” she said. “They are taking in the compliance underfoot prior to the jump, adjusting themselves mid-jump (such as using a vertical surface), and then even compensating for errors during landing to still successfully stick their landing.”

Learning how the squirrel mind works, Jinn said, may help programmers, even though mimicking squirrels’ other characteristics will be harder. “Squirrels are made to jump. They have powerful back legs for jumping, claws, and ankles that pivot 180 degrees to help them hang upside down. All of these are learnings that can inspire robotic design much quicker,” said Jinn.

Jacobs notes that robot designers are also studying squirrels’ remarkably flexible spines to improve robots for military and other applications. Even flying squirrel robots are possible.

Officials of the U.S. Defense Advanced Research Projects Agency (DARPA) recently released a call for research on what they dubbed the SQUad Intelligent Robotic Radio Enhancing Links (SQUIRREL) project. SQUIRREL is foreseen as a system of climbing, flying, or hybrid robots to form three-dimensional networks to support small teams of soldiers in the field with communications, even in dense tropical rainforests.