Netflix Has Not Confirmed Second Season Of ‘Julie And The Phantoms,’ But Fans Express Support

The Emmy-winning show’s soundtrack album reached No. 1 on iTunes. 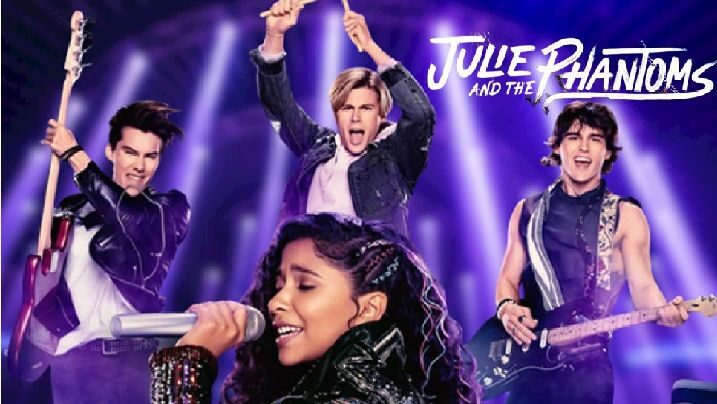 ‘Julie and the Phantoms’ is an award-winning series about a young girl who sings with three boy ghosts. Its first season was released on September 2020. (Amazon)

Netflix has not yet greenlit the second season of Daytime Emmy-winning series “Julie and the Phantoms. Fans have been more vocal — posting their support on Twitter.

“Julie and the Phantoms” is a Netflix dramedy musical produced by Jaime Aymerich and Kenny Ortega. Last June, it won three Daytime Emmys.

The show tells the story of a heartbroken teenage girl who starts a band with three teen boy ghosts. It won the coveted award for Original Song with “Unsaid Emily,” Outstanding Costume Design and Outstanding Multiple Camera Editing for a Drama or Daytime Fiction Program.

A post shared by Julie and the Phantoms (@julieandthephantoms)

Michelle Lewis and Dan Petty wrote “Unsaid Emily.” Don Brochu was in charge of the film editing, and Soyon An and Eilidh McAllister handled costume design.

“Julie and the Phantoms” starred up-and-coming actress Madison Reyes in the role of Julie Molina.

Its soundtrack album “Julie and the Phantoms: Music from the Netflix Original Series” reached No. 1 on iTunes in the U.S. and charted internationally in Australia, Brazil, Canada, France, Italy, Spain and the U.K.

Ortega, artist of Spanish descent, directed and choreographed the series. “Julie and the Phantoms,” one of many musicals on his resume. Other director, choreographer and producer credits include Michael Jackson’s “This Is It,” the “High School Musical” franchise, “Dirty Dancing,” “Salsa,” “Xanadu” and videos for Madonna, Miley Cirus and Fleetwood Mac.

Producer Aymerich credited “Julie and the Phantoms’” three Daytime Emmys and overall success to fellow executives and creatives who worked on the series. “Kenny Ortega is such an amazing artist, an auteur,” said Aymerich. “Dan Cross and David Hoge created an excellent show which culminated in this incredible acknowledgment from the Academy.”

He also recognized the Latin American roots of the musical series.

“It’s the success of diverse shows like these that prove the more we are inclusive behind and in front of the camera, we will always bring the best entertainment. We look forward to continuing this work to bring more Latinx and diverse content to the U.S. market,” he said.

A post shared by Julie and the Phantoms (@julieandthephantoms)

“Julie and the Phantoms” represents a milestone for Aymerich.

It marks his series-producing debut. He was born and raised in Mexico City, where he studied acting at the Center of Dramatic Arts. In his native hometown, he worked in theater and also appeared in various T.V. series. He moved to Los Angeles in the mid-1990s to pursue a career in Hollywood and has appeared in Showtime’s “Weeds,” Amazon’s “Bosch” and Telemundo’s “Betty en N.Y.”