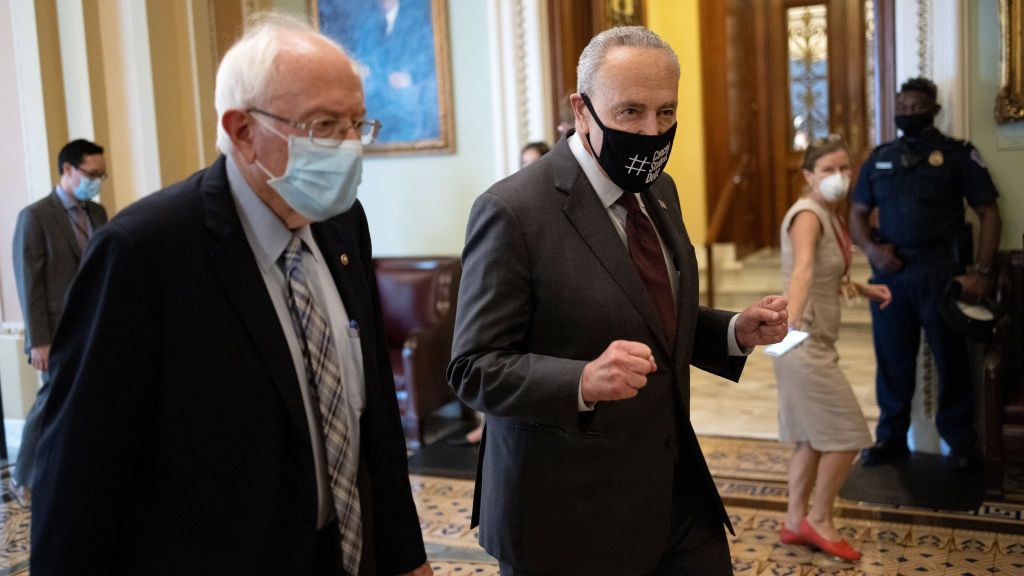 Republicans who campaign in the 2022 Congressional midterms against Democratic-led spending amounting to $5 trillion may struggle to find the same support as in years past, experts say — even if a classic GOP crusade against a “tax-and-spend” administration is not completely off the table.

The Senate this week passed a $1.2 trillion infrastructure package and a $3.5-trillion budget plan. The infrastructure bill received some Republican support and advanced after a filibuster-proof 69-30 vote. But it was Democrats who passed the budget resolution on a party-line vote of 50-49.

Both bills still need to pass the Democrat-held House, but some moderate House Democrats are worried the spending — in particular the $3.5 trillion proposed budget — could threaten the party’s slim hold on Congress. The GOP in recent decades has had some success targeting big spending during midterms — most notably during Newt Gingrich’s 1994 “Republican Revolution” and in the 2014 “Obamacare” midterms.

However, fiscal conservatism may not be the overriding issue in the 2022 midterms.

“I don’t think these various infrastructure bills have animated the electorate the way that, for instance, recent battles over health care have,” said Kyle Kondik, managing editor of election forecaster Sabato’s Crystal Ball at the University of Virginia Center for Politics.

“It’s possible that none of this will really have a major impact on the campaign next year,” he said.

Kondik said the GOP is likely searching for issues with more emotional heft.

The $1.2 trillion infrastructure package, which gained the support of 19 Senate Republicans, including Senate Minority Leader Mitch McConnell (R-Ky.), is unlikely to be much of an issue with voters from either party, analysts say.

It calls for $550 billion in new federal investments over five years, including $110 billion for roads, bridges and other transportation projects. It also includes funding for broadband infrastructure, airports, ports, waterways and water systems, as well as subsidies for electric vehicles.

The proposals in the bill were always going to be hard for GOP lawmakers to deny constituents, said Thomas Sutton, a political science professor at Baldwin Wallace University in Ohio.

“It is one that generally is more popular on both sides of the aisle because it delivers real results in terms of funding for things that people can see, in this case bridges and roads, etc.,” Sutton said.

The measure also garnered Republicans’ support, he said, “because this version of the bill eliminated a lot of the intangible pieces, such as ones that some would say were more human services-oriented that were being defined as infrastructure by President [Joseph R.] Biden by Democrats.

“The nature of it being infrastructure spending from a more conservative, traditional definition of that — I don’t see that one as being a politically challenging bill for either side,” Sutton said. “It’s really a bringing-home-the-bacon kind of bill when it comes to local benefits.”

Former President Donald J. Trump — who continues to hold sway over his party’s voter base — had vocally opposed the bill and implored GOP senators to vote against it. He framed its passage as handing a win to Biden and the Democrats ahead of the 2022 and 2024 election cycles. However, thanks perhaps to “strength in numbers,” according to Sutton, the 19 Republicans who supported the bill are unlikely to be worried about a rebuke or a Trump-backed primary challenge.

“I don’t think Trump considers this to be an issue he’s going to put much into,” Sutton said. “Clearly, he didn’t represent much of a threat in his opposition to those Republicans.”

But then there is the $3.5 trillion budget resolution. It passed the Senate without need to break the 60-vote filibuster threshold — and without the support of a single Republican. It now advances to the House. It instructs several Senate committees to craft a bill that includes funding for what the Biden administration deems to be “human infrastructure” — such as universal preschool, expanded access to affordable child care and education, and initiatives to battle climate change.

At almost triple the cost of the $1.2 trillion infrastructure bill crafted with GOP input, the $3.5 trillion bill, if passed, may more easily be leveraged against Democrats in 2022 battleground states with thin margins, including Sen. Mark Kelly of Arizona and Sen. Raphael Warnock of Georgia, said Kondik.

“It could be something that Republicans can portray as overreach,” he said.

While Arizona and Georgia have trended blue over the last few years, lawmakers in both states will be fighting uphill battles to retain their seats. Kelly barely defeated incumbent Republican Sen. Martha McSally in last year’s special election by 2.4 percentage points, while Warnock beat incumbent Republican Sen. Kelly Loeffler in a runoff special election in January by 2 percentage points.

In once strongly “red” states like these, a campaign on deficit spending may succeed.

“Fiscal conservatives are saying … ‘It’s not necessary’ and … ‘It’s going to continue to add to the deficit and the debt,’” Sutton said. “That one is politically more risky, but to be honest, the fiscal conservatives on either side seem not to be a major voice in how decisions are being made.

“In the larger scheme of things, Republicans voted for the tax cuts of 2017, and they voted for the big stimulus bill in 2020 that was supposed to be a response to the COVID crisis,” he said. “Both sides have voted for things that the other side can say, ‘Well, you’re blowing a hole in the deficit.’”

Daron Shaw, a professor in the Political Science Department at the University of Texas in Austin who previously worked as a Republican Party strategist and has written three books on election campaigns, echoed the sentiment.

“The general consensus in political science is that voters — conservative or otherwise — rarely punish elected officials for supporting spending bills,” Shaw said. “Voters often say they are concerned about the deficit or ‘out-of-control spending,’ but rarely act on this sentiment because those ideas are abstract.”

Still, with the right messaging, Shaw said, it would not be impossible for the GOP to exploit.

“Expressing concern about the deficit is more of a marker for the broader notion that government is broken,” he said. “That is, the government’s inability to ‘balance its own checkbook’ taps into the deeper feeling that government is incompetent. That is how Ross Perot used the issue in … 1992.

“A candidate who grasps this could absolutely use it effectively in 2022,” he said.