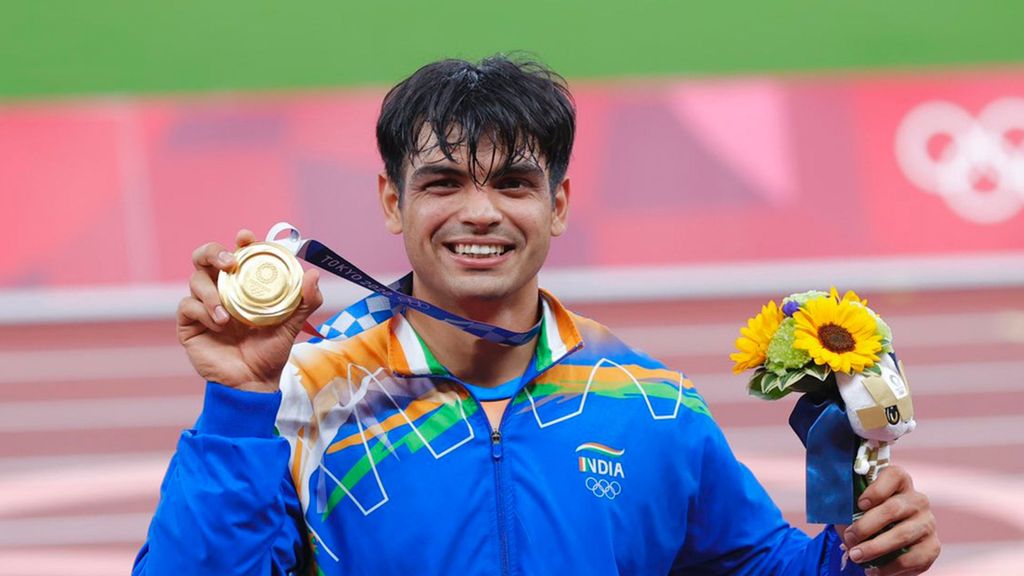 Neeraj Chopra created history on Aug. 7 as he became the first from the country to win a gold in track and field in the Olympics. (Neeraj Chopra, @Neeraj_chopra1/Twitter)

Chopra created history on Aug. 7 as he became the first from the country to win a gold for the javelin throw competitions. He threw the spear to a distance of 87.58 meters to pick the holy grail on his Olympic debut.

The 23-year-old athlete is breathing down the neck of his now-nemesis and world number two javelin thrower, Germany’s Johannes Vetter, who has a 1396 score, as per the latest update issued by World Athletics.

Chopra racked up 1315 points in men’s javelin throw after his Tokyo Olympics gold. The youngster previously sat at 16 with 1224.

Polish athlete who made the second-best throw of the season—Marcin Krukowski (89.55 meters)—finished third on the ranks with a score of 1302, failing to make the finals of the Games.

The rankings are determined by performances at the Olympics and take into account Federation Cup, the Indian Grand Prix-3, among other games. Vetter has dominated all the tournaments in the lead-up to the Summer Games with seven 90-meter plus throws this year alone. By comparison, Chopra has yet to surpass the distance.

The Olympics and other world events, however, carry more points in the determination of ranks. It is customary to release the official rankings and at the end of the competition in major tournaments.

The Haryana athlete’s historic golden throw in the Olympics—as it counts for something—has been listed as one of the 10 magical moments of athletics (track and field) in the Tokyo Olympics by the World Athletics.

“Most keen followers of the sport had heard of Neeraj Chopra before the Olympic Games. But after winning the javelin in Tokyo, and in the process becoming India’s first athletics gold medallist in Olympic history, Chopra’s profile sky-rocketed,” the intergovernmental athletics body said on its website.

Neeraj had 143,000 followers on Instagram before the Olympics but now has a staggering 3.2 million, making him the most followed track and field athlete in the world.

“Still processing this feeling,” he tweeted.

“To all of India and beyond, thank you so much for your support and blessings that have helped me reach this stage. This moment will live with me forever.”

Chopra’s coach Klaus Bartonietz recently said that he was not expecting gold from the wunderkind.

“Depending on what others do (in the final), there was a real chance to win a silver or bronze, but not gold. Nobody thought of gold,” he said.