Center To Get All Indians On Internet By 2025, Simplify Business Through Digitization: Minister 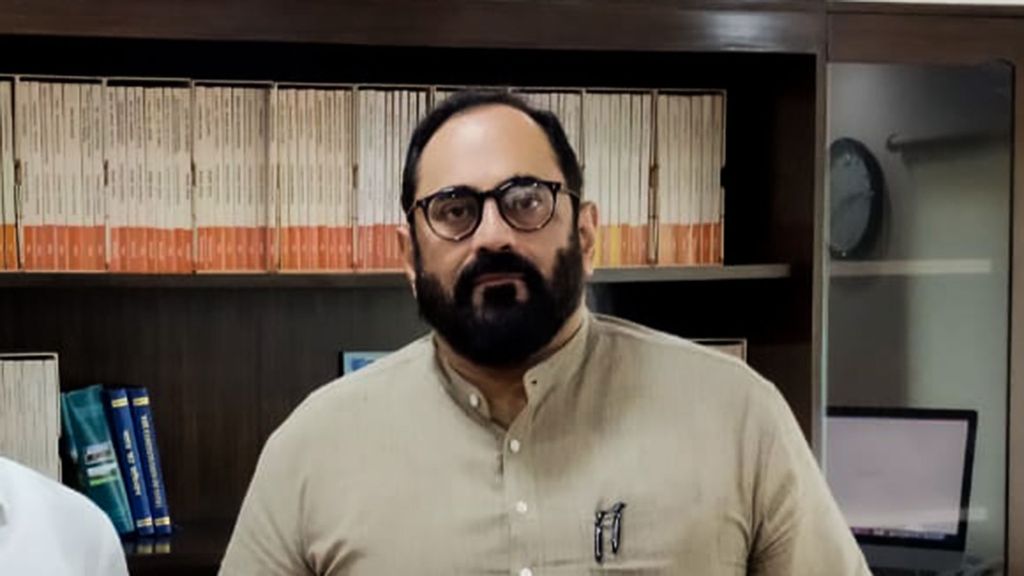 Minister of State for Electronics and IT Rajeev Chandrasekhar Addressing the Plenary on Digital- A boost to Indian Economy on the second day of the Confederation of Indian Industry (CII) Annual Meeting 2021 stated that digital will play a large role in the Indian economy in the next 25 years. (Rajeev Chandrasekhari, @Rajeev_GoI/Twitter)

NEW DELHI — The Indian government is looking at an ambitious target of signing up every Indian on the internet by 2025 (majorly through the national/rural broadband network of BharatNet), simplifying cyberlaw for ease of doing business and investing in advanced technology like Quantum Computing and Artificial intelligence, said Rajeev Chandrashekar, Minister of State for Electronics and Information Technology.

He said that digitization will play a significant role in the Indian economy in the next 25 years while addressing the “Digital— A boost to Indian Economy” conference on the second day of the Confederation of Indian Industry (CII) Annual Meeting 2021.

“(The) Prime Minister is deeply invested in the power of technology to transform governance by bridging the gap between the government and the citizens and various departments and panchayats to overcome the limitation of conventional modes of working in silos,” said Chandrashekar.

The minister elaborated on technology’s role, which has dis-intermediated the financial sector in the last several years by completely transforming them and the vast impact of Unified Payments Interface. He said that districts that have never had contact with the government in months could get direct financial transfers in the accounts during the pandemic.

Chandrasekhar envisaged between 500 and 600 companies having a turnover higher than Rs. 5000 crore ($6.7 billion) in the coming three to five years, up from only 25 such companies at present. He urged the private sector to drive innovation.

“Unlike many countries, data privacy is a fundamental right in India,” he said.

“The Government is bringing Data Protection Bill, which is with the Parliamentary Standing Committee now.”

He also said that taking reforms is a matter of conviction for the government, which is ready to take all risks in the national interest.

Prime Minister Narendra Modi at the meeting said that the country’s economic growth is picking up pace again and the domestic industry needs to enhance its risk-taking appetite.

“We have taken bold decisions. Reforms continued even during the pandemic. The government is doing reforms not out of compulsion but out of conviction,” he said while addressing the Confederation of Indian Industry (CII) annual meeting.

Every nook and corner of the industry has been transformed with digitization at its core, said Kris Gopalakrishnan, former President, Confederation of Indian Industry, Co-Founder of Infosys Limited, and Chairperson, Axilor Ventures Private Limited, speaking on the massive outreach of digitization.

“Digital infrastructure, governance, and services on demand and digital empowerment of citizens are the cornerstones of Digital India initiative as envisioned by Prime Minister Narendra Modi,” he said.

Kiran Karnik, Chairman, Confederation of Indian Industry’s National Committee on e-commerce and former President, National Association of Software and Service Companies, said: “We are well on the path of using newer technologies – be it on the Internet of Things (IoT), or Artificial Intelligence or be it in manufacturing or preventive maintenance or for increasing the efficiency of services in host areas.”

India is predicted to add 350 million internet subscribers to its national userbase (of currently more than 500 million) by 2025 in what has been termed as its ongoing or sixth era of internet evolution, with the demand driven by regional and rural folks, women, and children studying school, as per a 2020 report by World Advertising Research Center.