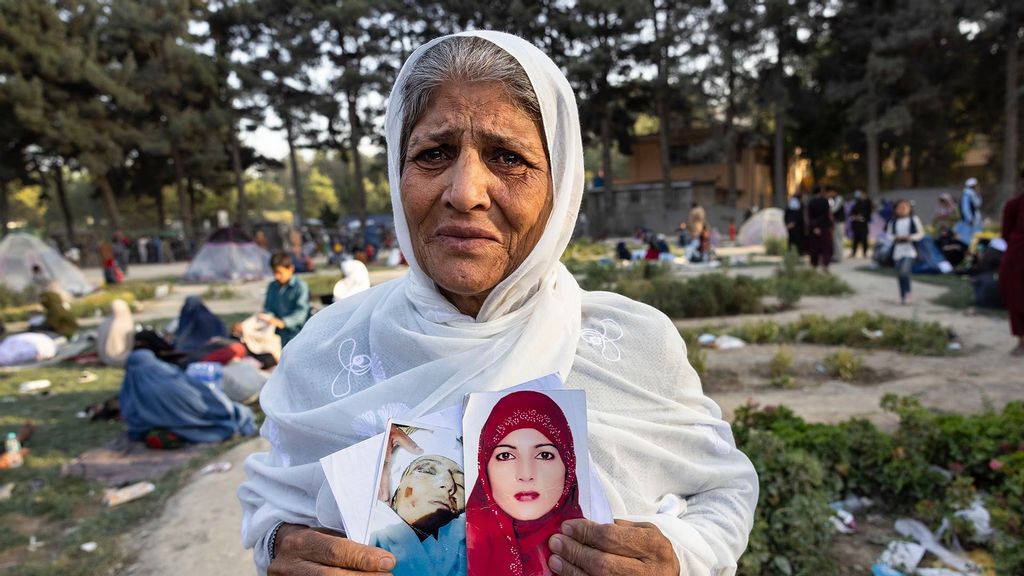 Zoohra, 60, holds the photo of her daughter who she said was killed by the Taliban one month ago at a makeshift IDP camp in Share-e-Naw park to various mosques and schools on Aug 12, 2021 in Kabul, Afghanistan. (Paula Bronstein/Getty Images)

KABUL — A social media campaign in Afghanistan is demanding sanctions on Pakistan as many believe Islamabad is behind the Taliban’s destructive offensive.

Over the past four days, Afghan social media users have put up thousands of posts on Twitter and other platforms using the hashtag #sanctiononpakistan.

Pakistani officials have denied the accusations.

But several Afghan politicians and famous figures have joined this campaign.

Afghanistan’s First Vice-President Amrullah Saleh, on Aug. 9, used the sanction hashtag in an appeal he put out to the world via Twitter.

“We call on UN [United Nations] and other international organizations to work with us in providing any assistance to the massive number of people who have sought refuge in Kabul due to brutality, revenge killing, loot, and rape by the Talibs. Painful scenes in the streets of Kabul. #SanctionPakistan,” Saleh tweeted.

This social media movement comes amid the sharp escalation in violence across the country and just days after Afghanistan’s UN ambassador, Ghulam Isaczai, pleaded with members of the UN Security Council to pressure the Taliban to engage in peace talks.

In his address to the meeting on the Afghanistan situation, Isaczai said the attacks launched around the country had been done with the “direct support of more than 10,000 foreign terrorist fighters representing 20 groups”, including Al-Qaeda and ISIS (Daesh), or Islamic State of Iraq and Syria.

Isaczai said that the Taliban “continue to enjoy a safe haven in and supply and logistics line extended to their war machine from Pakistan,” as per media reports.

“These hashtags are shared by the people, not bots,” said Fahim Ahmad Yousuzad, an information technology expert, as per the media report.

“We are burning in the flame of the war imposed on us,” said Fatima Murchal, President Ashraf Ghani’s deputy spokeswoman.

“This unbearable pain we endure due to Int terrorism requires the world to take a stance. This silence indicates a very high tolerance for terrorism. #SanctionTaliban #SanctionPakistan #EndProxyWarInAfghanistan.”

For the third day in a row, #SanctionPakistan is a top trend on all social media platforms, according to Habib Khan, a prominent Afghan journalist. “Afghans are speaking loudly and clearly. Listen, world, listen.”

“#SanctionPakistan isn’t just a hashtag trending on Twitter. It reflects the determination of Afghans, Pakistanis, and citizens of many other states to live in peace — free from invasion, proxy war, and terrorism,” Alexander tweeted.