VIDEO: Forest Fire Arsonist Arrested After Drone Catches Him in the Act 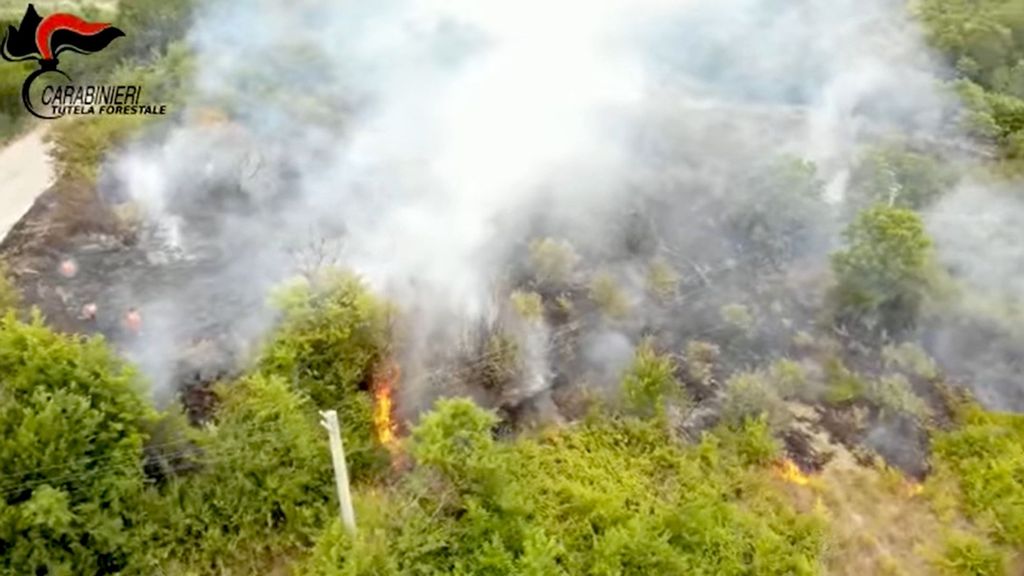 This fire in Benevento, Italy, was started by a man who was caught in the act by a drone camera. (Carabinieri per la Tutela Forestale/Zenger)

Forest rangers investigating the source of a wildfire in Italy didn’t have to look far: A drone, deployed to scout areas where previous blazes started, caught a firebug in the act.

The drone’s camera filmed the arsonist setting a fire with a cigarette lighter in a wooded area and then casually walking away. The Carabinieri per la Tutela Forestale — Italy’s forest-protection police force — arrested a man who was found nearby.

Firefighters in Montesarchio, a town 30 miles northeast of Naples, put the fire out the same day, Aug. 5. It destroyed about 5 acres of pasture and woods, despite police seeing video of the flashpoint shortly after the first flames lit up.

Police have not released the name of the man they arrested but told reporters that he is a 50-year-old sheep and goat farmer.

Italy has grappled with an unusual number of forest fires this year because of parched grasslands and forests. Roberto Cingolani, a physicist who is Italy’s minister for ecological transition, told his nation’s parliament on Aug. 5 that people start “more than 70 percent of the fires” ravaging Italy’s rural regions —most of them deliberately.

Cingolani said lightning strikes and other acts of nature cause just 2 percent of forest fires, compared with 57.4 percent that are due to arson.

Deploying drones with cameras has become a key firefighting strategy in southern Italy, with the Carabinieri per la Tutela Forestale saying forest rangers especially need the strategy during the summer months.

Alberto Brivio, president of Coldiretti Bergamo, a regional farmers’ association, said in a statement that wildfires have charred tens of thousands of acres, including olive groves, and led to a mass slaughter of farm animals.

Brivio speculated that Mafia organizations could be setting fires in order to “force farmers to sell their land” — which would then be ripe for industrial development. “Arsonists are devastating the countryside in Apulia,” he said, referring to the region of Italy in the southeast that forms the “heel” of Italy’s boot-like shape.

A report published in February in the scientific journal Drones concluded that the use of the unmanned aerial vehicles is increasing in fire-detection work all over the world — especially in drought-plagued parts of the United States.

“Experts estimate that wildland fires will increase in the coming years mainly as a result of climate change,” they concluded, while saying drones “can fly or hover over specific zones to retrieve relevant data in real time,” limiting their impact.

It’s unclear what charges the farmer will face in the arson caught on video, or what his sentence might be if he is convicted. Two college students in Northern Italy were ordered to pay more than $30 million in fines two years ago, after their unattended barbecue grill touched off a fire that devoured 2,500 acres in December 2018.