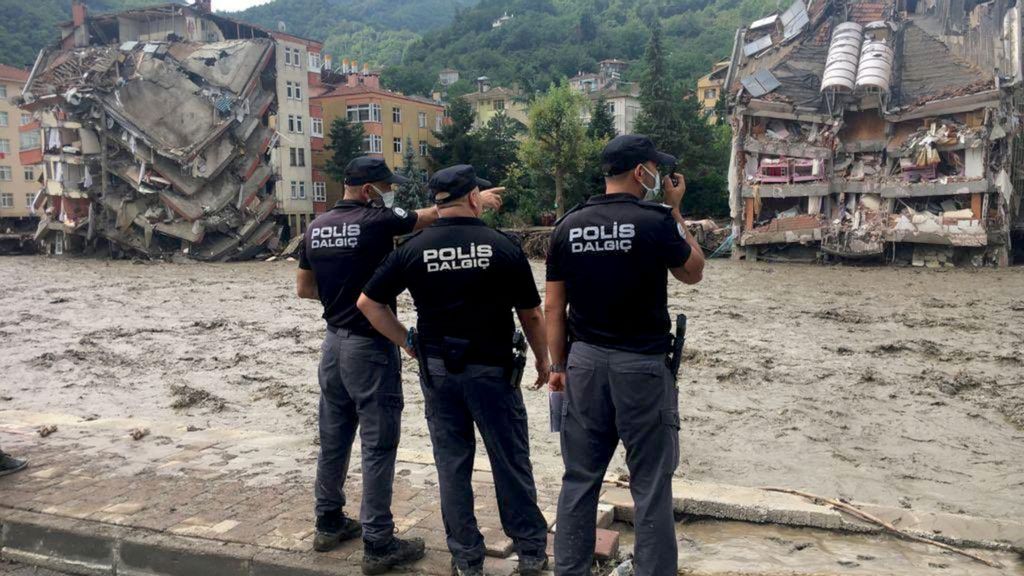 Turkey’s Disaster and Emergency Management Authority, akin to FEMA in the United States, said search and rescue teams are looking for at least one missing person.

The water level has reached 13 feet in some areas, according to the agency, following Aug. 11 rains that left entire communities seeking shelter. “There are places that we have not heard from yet,” Turkish Interior Minister Suleyman Soylu told reporters. He warned people not to leave designated safe zones while evacuations continue.

Four Black Sea provinces have seen widespread floods. Emergency responders have rescued stranded residents in inflatable boats and aboard helicopters and other aircraft — which the Turkish agency said have evacuated 19 people to safety.

In the Küre district of Kastamonu province reported 7.8 inches of rain on Aug. 11. That’s nearly half its annual total of 16.3 inches, according to Weather-Atlas.com.

In the district of Ayancik in Sinop province, about 9.5 inches of rain fell on the same day. The region’s total yearly precipitation averages 40 inches, according to data from the European Centre for Medium-Range Weather Forecasts.

Residents of flood-affected areas were evacuated Wednesday, as was the flood-damaged Ayancik State Hospital.

Eight people were hospitalized after being trapped in landslides in the land-locked Karabük province. Villages throughout the region have lost electricity, and power shortages continue to plague seaside towns and other areas.

Turkey’s Ministry of Energy and Natural Resources said in a statement that nearly 30,000 households have lost power.

“When we look meteorologically, we are faced with a disaster that may occur once in 100 years,” Minister of Agriculture and Forestry Bekir Pakdemirli said at a press conference. Pakdemirli said a hydroelectric power plant in the region, which converts rushing river water to electricity, has not been affected.

Flooding and landslides due to rainfall have been overwhelming rescuers in Turkey for more than a month. Turkish President Recep Tayyip Erdoğan said July 17 that the Black Sea region of Rize would be declared a disaster area. Six people had been confirmed dead and two missing at that time.

More than 200 wildfires have consumed large swaths of southwest Turkey since July 28, stripping away forests and vegetation that would otherwise trap water.

The series of extreme weather events has affected most communities in the northern half of the country. A Turkish Coast Guard vessel rescued a dog in early August that fled a burning forest and ran into the sea.