Popcorn With Zenger: ‘Escape From Mogadishu’ Raises The Bar For Multinational Political Thrillers

With just a $20 million budget, historical action-drama in the running for the best film of 2021.
By Jacob Smith August 12, 2021
Facebook
Twitter
Linkedin
Email 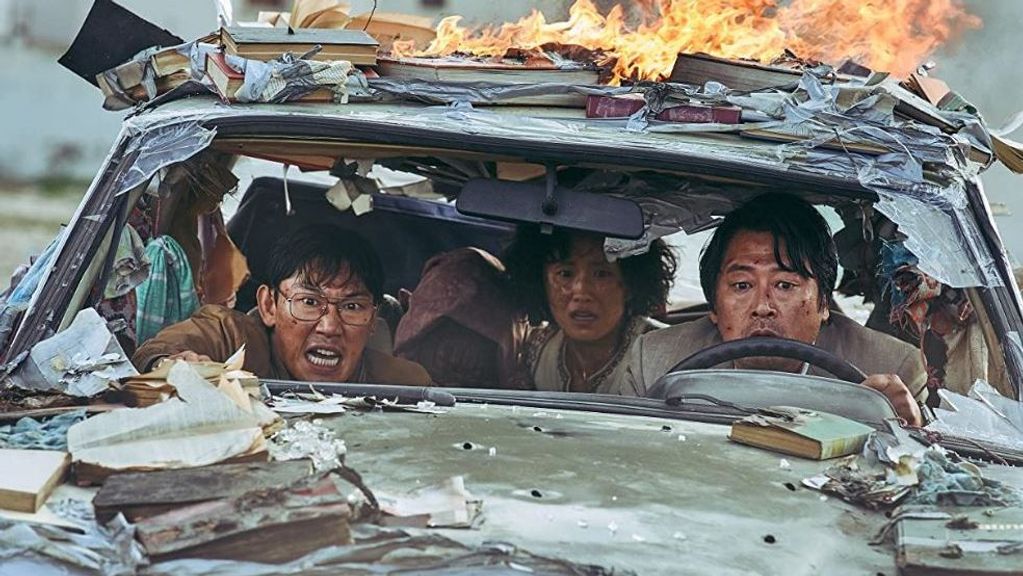 South Korean ambassadors are under attack in “Escape From Mogadishu.” (Lotte Entertainment)

While American studios struggle to recoup the cost of their big-budget bombs, South Korea’s Lotte Entertainment has produced arguably the best film of the year at a fraction of the cost.

Over the last few years, South Korea has become a powerhouse in the world of cinema. While it doesn’t have the billions of dollars to create and influence movies that China does, the country has produced outstanding films at a fraction of the cost, such as 2019’s Academy Award-winning film “Parasite.”

What separates South Korea and the U.S. film markets besides big budgets is the fact that Korea can create content without having to deal with big studio interference and mandates, meaning stories are allowed to be stories.

“Escape from Mogadishu” can be described as a historical action drama or a geopolitical thriller, but no matter your preference the film is one of the very best this year.

The Story: Set in the early 1990s in the city of Mogadishu, Somalia, a group of diplomats and their families are representing the South Korean embassy in an effort to be admitted to the United Nations. Their efforts to establish diplomatic relations are threatened when the North Korean delegation hopes to establish membership before their South Korean counterparts.

However, both delegations find themselves at the brink of survival when the Somali Civil War breaks out in the middle of their trip. Isolated with no communication to either North or South Korea, the embassies are stuck between the Somali government and the rebel forces, and both sides are extremely hostile to their foreign presence.

The two delegations, who had been forbidden to associate with one another, are forced to work together to escape Mogadishu and the firestorm of bullets and enemy forces along the way.

Bright Spots: While films based on the Somali Civil War of the 1990s are nothing new, this is one of the first films of its kind that tackles the conflict from a Korean perspective. The movie blends the tales of two separate civil conflicts together, creating one complex and riveting story of nationalism and survival.

While Somalia is the setting for the story, the focus is on the North-versus-South Korean conflict and the complexity of their rivalry. North Korean officials are not even allowed to associate with South Korean officials over fears that their representatives will defect to the South. Conspiring with the South is punishable by death, making the stakes of working together in secret that much more dangerous.

The story delivers a strong message about the evils of corrupt governments and how their policies destroy the lives of their citizens, even their own diplomats. Writer/Director Seung-wan Ryoo handles the story with grace, while avoiding editorializing the events to fit a narrative. Seung-wan doesn’t attempt to portray either the government or the rebels as the heroes, as both sides are equally dangerous to our protagonists. He also manages to sympathize with the people involved in the conflicts, without excusing the brutality of the situation.

The film does a great job of emotionally portraying the difficulty the Korean rivals experience when they are forced to rely on each other as allies in hostile territory. At one point the South Korean delegation wishes to bring the North Koreans back to Seoul as defectors but doing so will guarantee the deaths of the North Koreans’ family back home.

For a budget of $20 million, this is one of South Korea’s biggest films in years, but the money is spent wisely, sucking the audience right into the world of an early ’90s international incident. “Escape from Mogadishu” hits a cinematic home run with a charismatic cast, smart writing and intriguing storytelling.

Weak Spots: The only flaw the movie has is its pacing. For a two-hour film, the pacing is frantic and at times can feel like there is too much happening at once. The story can be trying for those with short attention spans, but it is worth it for those hungry for thought-provoking stories.

The Takeaway: “Escape from Mogadishu” raises the bar for multinational political thrillers in the world of global filmmaking. A film that displays high-level geopolitics and intelligently written dialogue takes the early spot for the best film of 2021.

See or Skip: “Escape from Mogadishu” is an escape from tiring, repetitive, creatively bankrupt cinema and is a must-watch for those who yearn for what movies can still become.