Latin Americans Travel To The U.S. To Get Vaccines Where There Are Plenty

Difficult access and slowness of vaccination programs motivate them to travel; meanwhile, many Americans reject the vaccine. 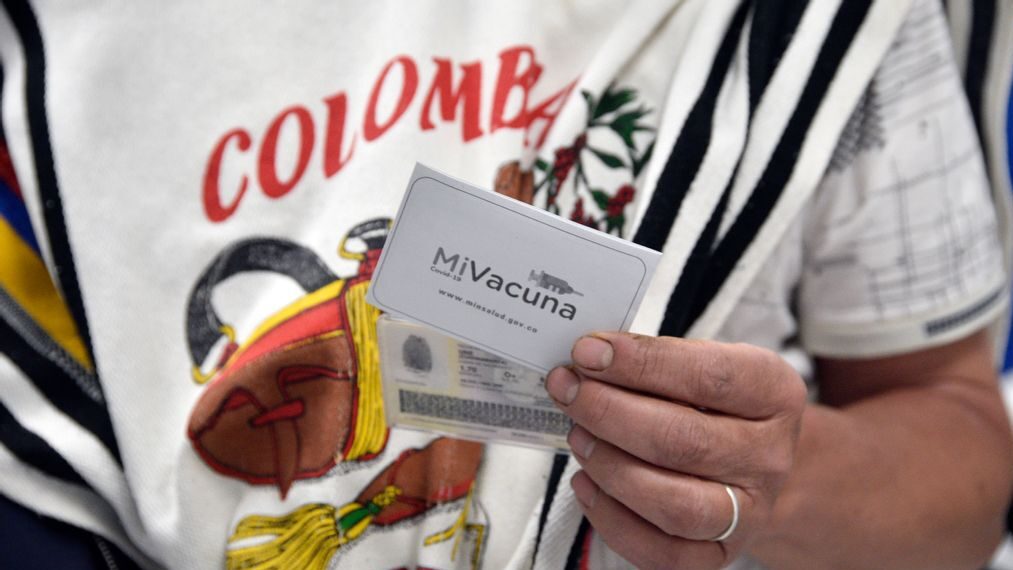 A Colombian man in the town of Nazareth carries his vaccination card. Many Latin American countries face difficulties in vaccinating their populations. Those who can afford it often travel to the United States to get vaccinated. (Guillermo Legaria/Getty Images)

CARACAS, Venezuela — The website Our World in Data estimated that by the end of July 2021, the United States had administered more than 340 million COVID-19 vaccine doses. But half of the country’s population is still unvaccinated.

Johns Hopkins University estimates that a country reaches herd immunity when at least 70 percent of its population is fully vaccinated. In Latin America, only Chile and Uruguay are close to that number.

Given the vaccine surplus in the United States and the refusal of some of its population to get the shots, certain places within the country offer tourist vaccination, and many Latin Americans consider traveling a better choice than waiting for their turn in their homelands.

“The process in Colombia has been super slow,” said Valentina Linares, a student who accompanied her mother on a business trip to the U.S. and got the single-dose Johnson & Johnson vaccine there.

She explained that two-dose vaccines had been a sensitive topic in her country. “People who got the first Pfizer shot have waited more than 21 days to receive the second one. [Vaccine] management has been terrible.”

The vaccination process in the U.S. “is very fast. … I spent no more than 20 minutes. I had to show my passport. They asked me what vaccine I wanted to get, made me sign a document saying that I was aware of the vaccine’s possible side effects, and vaccinated me,” said Linares. “There were many Mexicans, Brazilians and Colombians in line.”

“The vaccination plan in Ecuador is a bit slow. Due to my age and not having any serious disease, I was eligible only for the Sinovac,” said Verónica Rodríguez, who lives in Quito.

“But I had already planned a trip [to Atlanta]. So, I took advantage [of it] and got vaccinated here. I got the Pfizer. It was super fast. I went to a nearby pharmacy, indicated that I wanted to receive the vaccine, and they [the employees] gave me a form.”

“I only waited for 20 minutes and got the vaccine. It was free, and they even gave me a date for the second dose,” said Rodríguez.

Some traveled because they needed to choose a specific vaccine.

“I am allergic to polyethelinglycol, which is one of the components of the vast majority of vaccines. Because of my allergy, I could only receive the AstraZeneca or Pfizer shot. But the municipality where I live was only offering the Sputnik V for my age group,” said Fernando López, who traveled from Mexico City to Miami to get the vaccine of his choice.

Despite being a solution for some, vaccine tourism has caused scandals in the political arena.

“I have not used the vaccine of any Peruvian. I have gone to the United States, paid for my plane ticket and received the shot there,” said former Peruvian presidential candidate Hernando de Soto, back in April, in a television interview.

Former Argentine President Mauricio Macri was criticized for receiving his shot in Miami. He explained his position in a television interview: “My turn was about to come because I’m over 60. But am I going to use somebody else’s vaccine instead of walking two blocks and paying for mine?” Macri said on the show that he had made a work trip to the U.S. and discovered there that he could get vaccinated at a pharmacy.

“The only one who paid for the vaccine was Mauricio Macri, in Miami, where the vaccines are free,” said Argentina’s Factor UV Radio host Ursula Vargues, mocking the politician.

The United States is not the only country that allows tourists to get vaccinated. Other destinations, such as the Maldives or San Marino, have announced plans to reactivate the tourism industry after complying with the country’s vaccination plan. Russia is also considering offering tour packages that include Sputnik V vaccination.

However, only a tiny percentage of the population can afford to get a tourist visa and travel to the United States or any other country offering vaccines.

The underlying problem is Latin Americans’ lack of access to the vaccines and the governments’ inefficiency in administering the doses to their populations.

By contrast, certain places in the United States have had to throw away many doses due to a lack of demand.