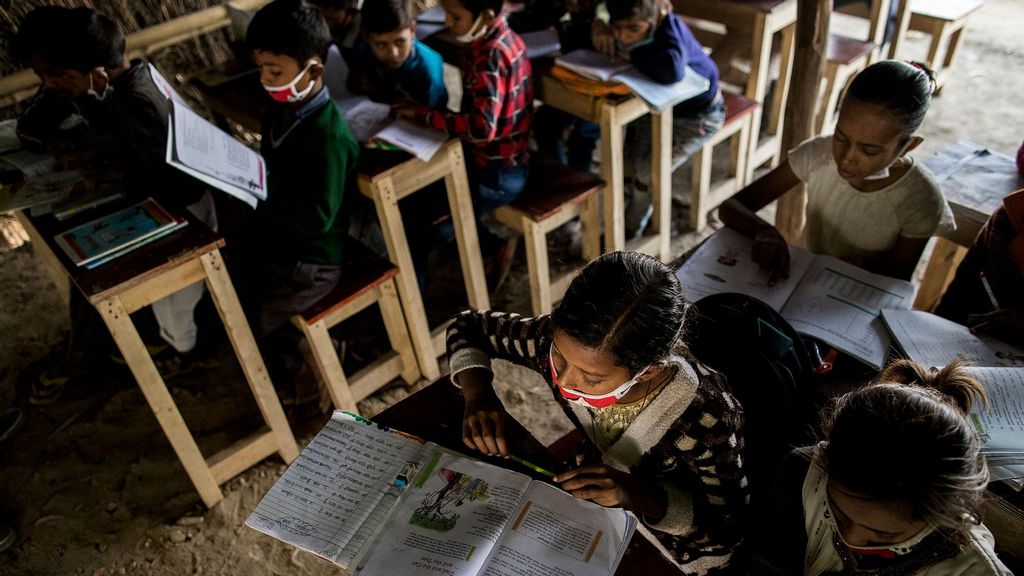 Underprivileged children study at an improvised classroom set up at a construction site on Dec 09, 2020 in New Delhi, India. (Anindito Mukherjee/Getty Images)

NEW DELHI — The apex child rights body in India, the National Commission for Protection of Child Rights (NCPCR), in a report, said that the minority schools in the country comprise 62.50 percent of students from the non-minority communities.

In comparison, only 37.50 percent belong to minority communities.

“Muslim community schools [20.29 percent] have the lowest percentage of non-minority population among their minority schools,” the report said.

The report was prepared to find a way and ensure that children from minority communities receive their fundamental rights to quality education.

The spike in schools with minority status certificates (MSC) occurred after the 93rd Amendment Act in 2006 was passed in India.

The 93rd Amendment Act makes it compulsory in private institutions but exempted minority education institutions from it.

“More than 85 percent of schools of the total schools secured the minority status certificates in 2005-09 and later,” the report said.

“Schools were found to be admitting non-minority students to a large extent. In Madhya Pradesh, Chandigarh, and Uttarakhand, the percentage of students from the non-minority communities goes up to more than 80 percent.”

The report also said that “there are many children attending schools/institutions that the government does not recognize.”

“The poor and deprived are not getting an education. NCPCR, in its report, has tried to understand the reason behind this. We tried to assess how much the benefit of this exemption is being seen in these children.”

The report was prepared with the help of all the states of the country.

The states provided the details about their minority schools and the students of minority communities. The datasheet given by the states was further checked by the Quality Council of India (QCI).

“In some states, almost 80 percent of students reading in minority schools are Hindu, which means minority students are not getting the facility,” Kanoongo said.

The report, in its recommendation, said that as per the National Commission for Minority Educational Institutions guidelines, “the state government can prescribe the percentage of the minority community to be admitted in a minority educational institution taking into account the population and educational needs of the area in which the institution is located.”

However, in the absence of clear guidelines from states and despite the significant presence of minority students in school-going age groups, minority schools are catering to less than 8 percent of the minority children population.