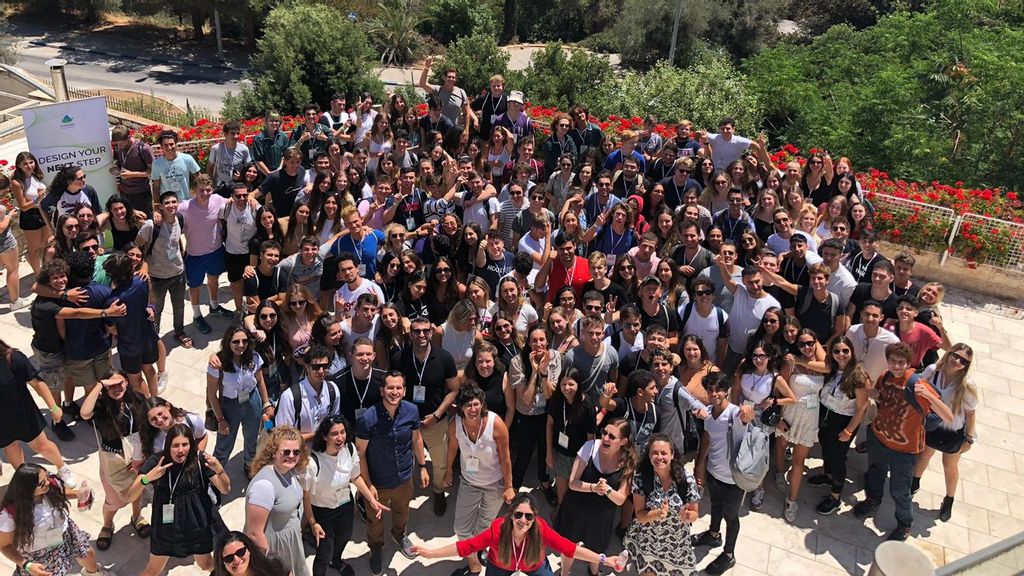 A conference for young Jewish adults at the Hebrew University of Jerusalem was held for more than 300 Masa Gap Year Fellows. They were encouraged to think about how they would transform their time in Israel into something positive. (Courtesy of Masa)

Amid a documented increase in anti-Semitic incidents, a recent conference for young adults in Israel confronted challenges students and young adults face.

Ava Nesis from Santa Monica, California, who is living in Israel on a fellowship from Masa Israel Journey, which sponsored the conference, said she was called a “rat Jew” while attending Santa Monica College.

She dropped out of college and is pursuing making Aliyah [moving to Israel, a tenet of Zionism].

Zachary Weinstein, a Masa Fellow and backend developer intern from San Diego, is taking part in an immersion program in conjunction with Masa. He also experienced anti-Semitism on campus. While he was a student at San Francisco State University in 2019, he witnessed harassment against Jews after a controversial webinar with Leila Khalid was halted.

Khalid is “a longtime active leader of the Popular Front for the Liberation of Palestine,” which the U.S. State Department has designated as a terrorist organization, the ADL states.

She “is well-known for her role in the hijacking of two civilian airliners, TWA Flight 840 in 1969 (bound for Tel Aviv from Rome) and El Al flight 219 in 1970 (traveling from Amsterdam to New York City),” the ADL states on its website.

Weinstein also said during a march marking Holocaust Remembrance Day, he saw the words “Zionists are not welcome” written on campus.

Nesis and Weinstein are among 11,000 young Jewish adults on a long-term stay in Israel this year as part of Masa Israel Journey, a nonprofit created in 2004. Since its inception, more than 170,000 young adults from over 60 countries have participated in a Masa program focused on studying, volunteer work or career development. Programs are open to those ages 18-30.

The conference was organized in response to what the ADL cited as an “uptick in anti-Semitic incidents linked to recent Mideast violence” in May.

Preliminary data from the ADL’s Center on Extremism shows “an increase in online and real-world incidents of antisemitism in the United States since the most recent outbreak of violence between Israel and Hamas,” said ADL’s chief executive officer, Jonathan Greenblatt.

“As the violence between Israel and Hamas continues to escalate, we are witnessing a dangerous and drastic surge in anti-Jewish hate right here at home.”

The Masa conference on June 15 aimed to provide Fellows with tools to enhance their lives and careers after their time in Israel ends, including global networking opportunities.

The event at the Hebrew University of Jerusalem drew more than 300 Masa Gap Year Fellows. Fellows were encouraged to pause and reflect on how they would follow their Masa experience, while considering how they would transform their time in Israel into something positive.

Tracy Frydberg, lecturer and adviser to former Israeli Minister of Diaspora Omer Yankelevitz, focused on the correlation between anti-Semitism online and in the streets. She also addressed challenges Jews face due to the rise of intersectionality, a concept developed by American lawyer and university professor Kimberlé Crenshaw. She coined the term decades ago “as a way to help explain the oppression of African-American women.”

Intersectionality, Frydberg said, helps explain the phenomenon of Palestinians and Black Lives Matter activists entering into a coalition, which was seen during anti-Israel protests.

Educator Mike Unterberg, a podcaster and consultant at Makom at the Jewish Agency for Israel, led a discussion about the differences between old and new anti-Semitism. He spoke about how “the Jewish question,” referenced by Theodore Herzl in the early days of Zionism, was not anti-Semitic. He also examined how the Nazis and Adolf Hitler used the same term in an anti-Semitic way.

“The ‘Jewish question’ isn’t necessarily a negative, it’s not necessarily a positive. It’s a question. ‘Who are the Jews, and why, if they are citizens with us, don’t they fit in? Why are they still different, and what should we do about it?’” Unterberg said.

Known as the “3D Test,” Sharansky says, it involves delegitimization of Israel, demonization of Israel and subjecting Israel to double standards. All constitute a form of anti-Semitism, he said.

In the U.S., the largest single category of hate crime related to religion was anti-Semitic incidents, according to the FBI Crime Statistics Report, released in late 2020. There were 953 anti-Semitic incidents in 2019, up 14 percent since 2018. On Oct. 27, 2018, what is believed to be the deadliest attack on the Jewish community in U.S. history occurred at the Tree of Life synagogue in Pittsburgh. Eleven people were killed and six were injured.