Nylon was saved by conservationists. Abandoned nets account for much of the plastic killing the life in our oceans.
By William McGee August 11, 2021
Facebook
Twitter
Linkedin
Email 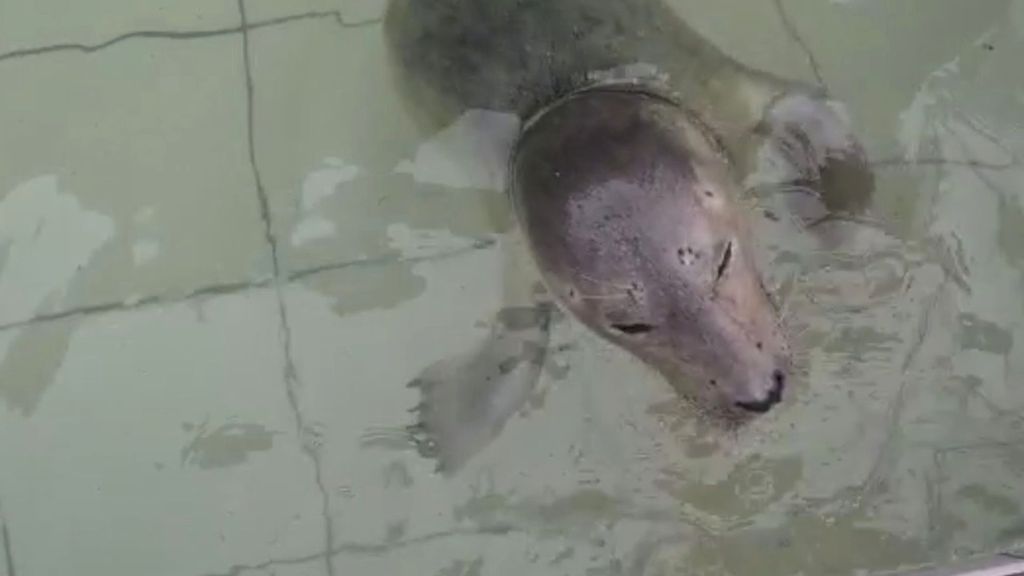 A seal, later named Nylon by rescuers, got caught in a fishing net and was badly injured. He was rescued on a beach in the Dutch Wadden Islands. (Ecomare/Zenger)

A seal whose flesh was cut by an abandoned fishing net suffered one of the worst injuries conservationists have seen, according to those who rescued him.

The young male seal, named Nylon by his rescuers, is recovering, and they are optimistic he may eventually be released back into the wild.

Staff at Ecomare, a museum, aquarium and animal-rescue center in De Koog on the Dutch Wadden island of Texel, found the seal on the beach on Aug. 9. They arrived after a passerby spotted the animal and alerted the center. Staff brought the animal back to their shelter, where a veterinarian helped free it from the net.

Nylon suffered a deep cut to his neck and the corners of his mouth were torn.

The staff determined the 66-pound seal was born last winter.

“The seal is … doing well,” said Daphna Lavy of Ecomare. “We are still not certain that he will survive, but we are hopeful. He eats by himself; that is great news.

“The vet gave him injections with antibiotics and painkillers and sprayed the wounds (with disinfectant).”

The seal must have been entangled in the net for a long time. As it grew, the rope cut deeper and deeper into its flesh, according to the Ecomare staff.

“We have had similar cases, but not this severe,” said Lavy.

The “single biggest single source of plastic choking out the life in our oceans is made up of purposefully or accidentally lost, discarded, or abandoned fishing nets, ropes, FADs (fish aggregating devices), long lines and plastic fishing crates and baskets,” according to the environmental action group Sea Shepherd.

“Approximately 46 percent of the 79,000 tons of ocean plastic in the Great Pacific Garbage Patch is made up of fishing nets, some as large as football fields,” according to a 2018 report by Sea Shepherd on abandoned nets. Researchers had expected the number of tons of ocean plastic at that time to be closer to 20 percent.

The environmental group estimates 30 percent of the decline in some fish populations is a result of discarded fishing equipment, while more than 70 percent of marine animal entanglements involve abandoned plastic fishing nets.