The “exotic” new Emira will soon be on display at the luxe mall in Manama. 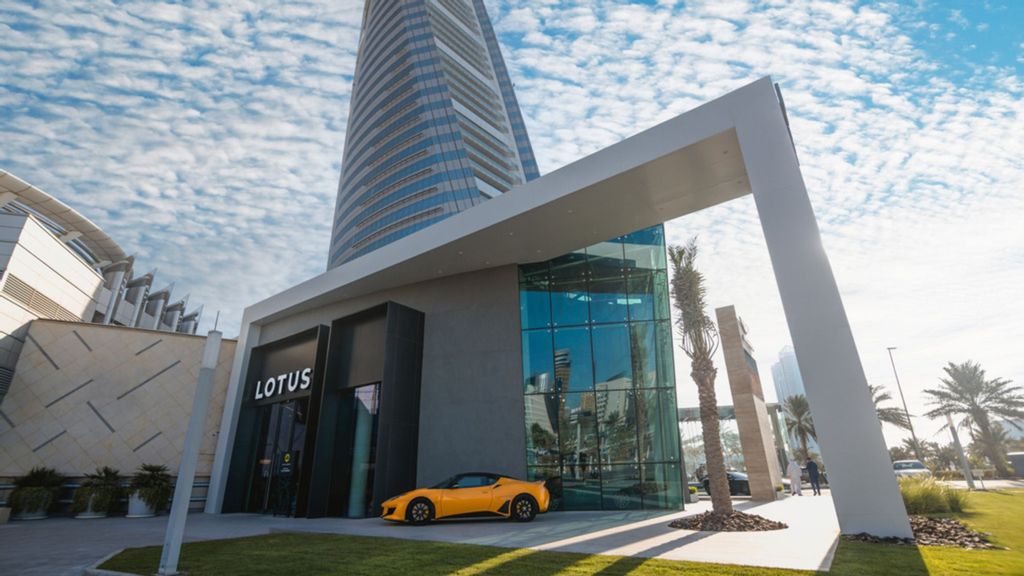 Lotus will feature its exotic and pricey supercars at its new showroom in the Moda Mall iin the Bahrain World Trade Center in Manama. (Lotus/Zenger)

Lotus’ upcoming “exotic supercar” — the $80,000 Emira — will soon be featured on the floor of the British manufacturer’s ultra-modern new showroom in Bahrain.

The showroom in the luxe Moda Mall in the capital city of Manama is the ideal setting, say executives of the carmaker, whose vehicles are for those with expensive tastes, as well as a need for speed.

Fans of Lotus, founded by Colin Chapman in 1948 and now headquartered in Norfolk, England, will also find the Lotus’ first electric “hypercar,” the Evija, and the Exige Sport 390 Final Edition at the showroom later this year or early next year.

“The mall is the perfect location for the world debut of our new retail identity, and it looks brilliant,” said Geoff Dowding, Lotus’ executive director, sales and aftersales. “Our new identity has been designed to adapt to the different markets that Lotus sells in around the world today … and to reflect the cultural nuances and different consumer preferences in those markets.”

The mall is in the Bahrain World Trade Center, a 50-story twin-tower skyscraper. The retail complex is home to about 260 designer fashion and jewelry brands, as well as restaurants, cafes, a beauty salon and a spa/gym.

The Lotus showroom is near the mall’s main entrance, close to valet parking and grouped with stores of other premium and luxury brands. The supercar brand is returning to the Middle East kingdom after more than a decade.

Taking center stage in the showroom until the arrival of the Emira is the Lotus Evora GT.

“This year is a pivotal one for Lotus, particularly with our sports cars, because we reach the end of one era and begin another,” said Matt Windle, Lotus Cars managing director.

“Adamas Motors Bahrain is extremely excited and proud to bring a brand-new concept in car retailing to Bahrain with Lotus Cars, in our department store-like showroom situated next to the high-end fashion parade in Moda Mall,” said Karl Hamer, CEO of Adamas Motors.

“We believe this will deliver high levels of customer satisfaction and a truly engaging experience, normally more associated with luxury product retailers.”