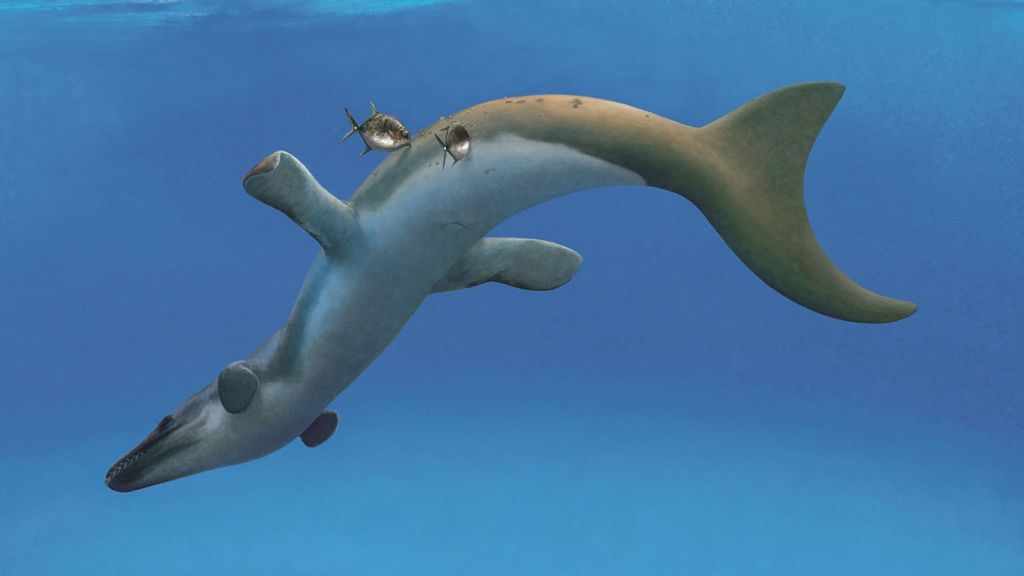 An illustration by German scientists shows a primeval crocodile with soft skin instead of rough scales. (Dinosaur Museum Altmühltal/Zenger)

A prehistoric crocodile did not have scaled armor but instead had soft skin similar to that of dolphins, a team of American and German scientists say.

The research, led by a team of experts at the Dinosaur Museum Altmühltal in Denkendorf, Germany, examined several previously unpublished fossils from Bavaria that were estimated to be around 150 million years old.

After evaluating fossils from the Altmühltal and Wattendorf sites, study leader Frederik Spindler said: “These reptiles must have felt something like today’s dolphins, taut and supple.”

The fossils belonged to a primeval crocodile from the Dakosaurus genus, which is an extinct genus of crocodylomorph in the family Metriorhynchidae that lived during the Late Jurassic and Early Cretaceous periods. The species had a dinosaur-like head and primitive rear flippers.

Dakosaurus, which was large and had serrated teeth, was a carnivore that went after larger prey. It spent much of its life at sea, where it most likely mated. Since no eggs or nests have been discovered referring to the genus, it is still unknown how it delivered its offspring.

Spindler said after evaluating the evidence under normal and ultraviolet light, the researchers discovered the extinct family of aquatic crocodyliforms called metriorhynchidae were entirely smooth and scale-free.

The same characteristics were found in ichthyosaurs and plesiosaurs, which represented a group of large extinct marine reptiles and had limbs shaped like flippers, according to 2009 research conducted by University of California, Davis geologist Ryosuke Motani.

Their particularly smooth skin made it easier for these marine reptiles to move around in the water.

Spindler was satisfied his team managed to almost completely recover a tail fin that belonged to a 3-meter-long (9.8-foot) sea crocodile that was bent at the bottom part, while the upper part consisted of soft tissue, which remained fossilized.

Together with the skin surface, the fin represents an evolutionary find that shows how marine reptiles were completely different before they transformed into land-dwelling crocodiles with scales and armor, researchers said.

The museum said this is the first time the characteristic has been observed in prehistoric crocodiles, which resembled dinosaurs.

The research team comprised Spindler from the Dinosaur Museum Altmühltal; Lauer Foundation for Paleontology, Science and Education curator Rene Lauer from Chicago; Helmut Tischlinger from the Jura Museum in the Bavarian town of Eichstatt; and Matthias Mauser from the Natural History Museum Bamberg, Germany.