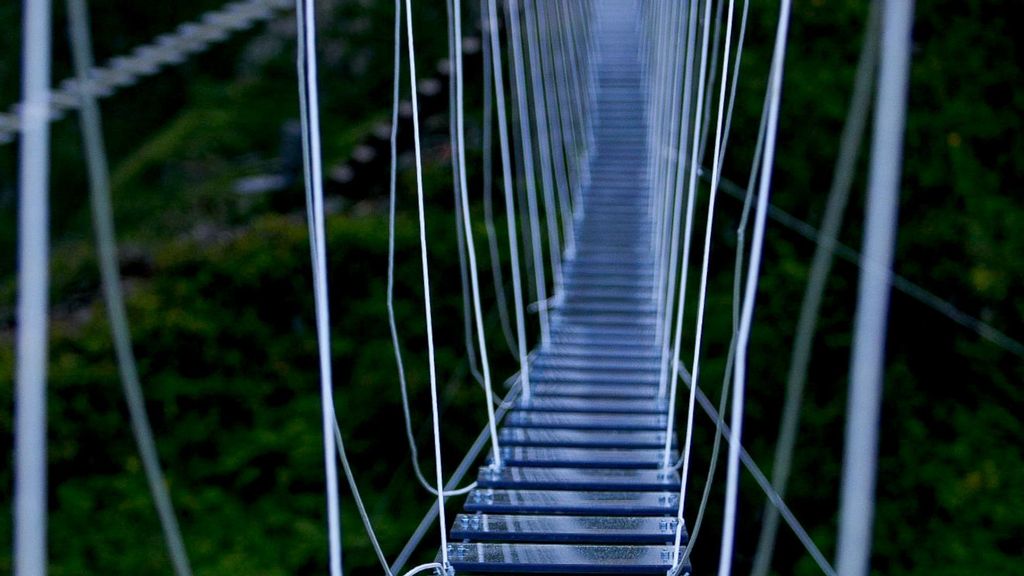 Russia's first glass suspension bridge has appeared in the Sochi Mountains at the top of Rosa Peak. (@kirill.baggage.photographer/Zenger)

Crossing a new rope bridge in Russia is a 105-foot-long exercise in not looking down.

Every step lands on a crystal-clear plastic slab — and there’s ample daylight between them to gaze into a steep mountain incline at an altitude of more than 7,600 feet. If you weigh more than 220 pounds, you’ll have to find some other way to cross the chasm.

The bridge at Rosa Peak in Sochi, Russia, the resort region famous for hosting the 2014 Winter Olympics, is shorter than similar ones that draw daredevils from all over the world. But most of those are continuous glass walkways.

The new Russian bridge is a spaced-out series of ladder rungs made from polycarbonate plastic, the same lightweight material opticians used to make lenses for eyeglasses.

It’s up to 250 times as strong as glass, according to Home Depot, which sells the material to construction crews.

“Of course, we were inspired by others overseas, but in the end we created our own version,” said project organizer Alexander Yakushchenko.

“The bridge itself, in contrast to those that already exist around the world, is mobile, therefore, the passage along it is filled with lots of vivid emotions,” he said.

The resort said in a statement that it guarantees safety “with special equipment which must be worn by everyone who wants to cross the bridge. There are also restrictions on weight and height. People whose weight does not exceed 100 kilograms [220 lbs.] and whose height is at least 130 centimeters [4’ 3”] are allowed on the bridge.”

The ski resort said thrill-seekers can take advantage of two other suspension bridges at Rosa Peak, along with the new bridge and its transparent steps.

One, the 377-foot “Big Bridge,” is open only during the summer. Its smaller sibling is 236 feet long and open all the time. The resort said it expects to keep the clear-plastic bridge open year-round.

Other suspension bridges thrill tourists by letting them look straight down through their feet. They include the Dachstein Skywalk in the Austrian Alps; Glacier Skywalk in Canada; Grand Canyon Skywalk in the U.S.; Bihar Glass Bridge in India; and the Glass Love Bridge in Vietnam.

But not every crossing is a success.

A man was stranded on a 330-foot-high glass suspension bridge over China’s Hailan River in May, when 93 mph winds shattered its glass panels. First responders rescued him 30 minutes later, according to police. China is estimated to have 2,300 such glass bridges, more than any other country.